Weinstein’s Fall Should Lead to Repentance, Not Gloating

Top Hollywood executive and darling of the Left, Harvey Weinstein, has fallen from grace and some conservatives are outright gloating.

Commentator Ann Coulter ripped into actress Meryl Streep for her apparent hypocrisy.  Streep had denounced supporters of President Trump during her Golden Globe acceptance speech, but had fawned over Weinstein, even referring to him once as “God.”  Coulter tweeted: “Meryl Streep on Trump: ‘Evil prospers when good men do nothing’ . . . Like she did for 20 years, winning Oscars.”

But Coulter reserved her most scathing critique for Ashley Judd, whose “Nasty Woman” speech ignited the crowd at the Women’s March:  “Ashley Judd to Trump voters. ‘You voted for a p***y grabber!’ Ashley Judd to Harvey Weinstein: ‘You can grab my p***y if I win an Oscar.’”

Critique came from Christians too.  “Where’s the Women’s March Against Sleazy Hollywood Execs?” wrote Ryan Bomberger, co-founder of the Radiance Foundation. “Sure, it’s great that famous actresses are coming out now to denounce Weinstein’s vile behavior. Why does it take a 13-year-delayed New York Times exposé for them to be ‘bold’? . . . Courage is denouncing evil no matter the cost to your reputation or your career.”

Bomberger has a valid point.  And I admit, the blatant hypocrisy, especially coming from self-righteous liberals, is hard to ignore. I couldn’t help commenting on Facebook myself when Hillary Clinton, who bullied and intimidated her husband’s alleged sex abuse victims, said in a statement that support of abuse victims “is critical in helping to stop this kind of behavior.”

“(T)he more I’ve thought about how conservative Christians should respond to this unfolding story of abuse, cover-up, and privilege, one proverb keeps coming to mind: people in glass houses shouldn’t throw stones.”

Yet the more I’ve thought about how conservative Christians should respond to this unfolding story of abuse, cover-up, and privilege, one proverb keeps coming to mind: people in glass houses shouldn’t throw stones.

Unfortunately, there is not a single sin Weinstein and Hollywood have committed that we Christians have not also committed, or willingly overlooked. Hollywood actresses traded their self-respect and integrity for the coveted chance at fame and an Oscar.  Democratic candidates cashed theirs in to fill campaign coffers.  Evangelicals, on the other hand, did it for a Supreme Court nominee and influence at the highest levels of government.

I understand the breathtakingly awful choices we had in this last election.  And I’m not condemning those who plugged their nose and voted for Donald Trump. But what made me sick then, and still does now, is how so many excused Trump’s abusive behavior towards women.

I wonder how Christians would respond to a tweet about Weinstein saying, “This just in: Harvey Weinstein is a flawed man! We ALL sin every single day.”  Or how would we respond if liberals tried to dismiss Weinstein’s behavior as merely “bad boy” antics?

Yet this is how Christians defended Trump.  And let’s be clear, Trump not only bragged about groping women.  According to a very believable reporter for People Magazine, and Trump’s own admission, he did it.  He also bragged about his practice of walking in on naked beauty pageant contestants.  Because Trump was rich and powerful, and could destroy or create careers just like Weinstein, women kept quiet.

“I can’t help wondering if we’ve made a deal with the devil that we will later profoundly regret.”

I understand Trump has become a great defender of conservative causes, and for that I am thankful.  Yet I can’t help wondering if we’ve made a deal with the devil that we will later profoundly regret.

As writer Ross Douthat recently mused after Hugh Hefner’s death, “Conservatives should ask how their crusade for faith and family and community ended up so Hefnerian itself — with a conservative news network that seems to have been run on Playboy Mansion principles and a conservative party that just elected a playboy as our president.”

But our collusion with Trump isn’t an isolated case. The church unfortunately is rife with stories of Christians intimidating and manipulating the weak to protect the rich and powerful.

Take Bob Jones University, which reportedly told sexual assault victims that they were to blame for their abuse and instructed them to stay quiet and not to report the abuse to authorities.  Doing so, school leaders said, would only damage the university, their churches, or their families.

Similarly, Jan Crouch, co-founder of the Trinity Broadcasting Network, reportedly bullied her own granddaughter, Carra Crouch, into silence when she confessed that she was sexually assaulted by a Trinity employee when she was just 13-years-old.  In June, a jury awarded Carra Crouch $2 million for her years of emotional trauma and suffering due to her grandmother’s unconscionable response.

But what about the press and its bad behavior?  Certainly the mainstream media’s tacit agreement to cover up Weinstein’s abuse is unique, right? After all, NBC refused to run Ronan Farrow’s blockbuster story, forcing their own reporter to find another media outlet for his expose.  There also are reports that Matt Damon and Russell Crowe helped kill a story on Weinstein’s sexual misconduct in 2004.

Unfortunately, this kind of covering for friends happens in Christian media too, perhaps to an even greater degree.  When I worked in the secular media, I never once had a story killed or bypassed because it offended a powerful person or institution. The only determinants were whether the story was both newsworthy and true.  Yet in the evangelical world, I have had stories killed or bypassed for no other reason than they might hurt powerful people.  It’s terribly disheartening.

As Ingrid Schlueter, former producer for radio host Janet Mefford said, “There is an evangelical celebrity machine that is more powerful than anyone realizes.”  Schlueter resigned her job in protest in 2013 after strong backlash caused Mefford to apologize for exposing that now-disgraced Pastor Mark Driscoll had plagiarized a professor in his book, A Call to Resurgence.

“Christians should support those who tell the truth.  Instead we often kill the messenger and protect the powerful.”

Christians should support those who tell the truth.  Instead we often kill the messenger and protect the powerful.  Sadly, we are not different than the world in this regard, but we should be.  Bomberger is absolutely right that “Courage is denouncing evil no matter the cost to your reputation or your career.”  Yet this kind of courage is sorely lacking – not just in Hollywood, but throughout the church.

The Harvey Weinstein debacle should not be an opportunity to point the finger – to look down our noses at liberals and celebrate how morally superior we are.  Instead it should be a sobering moment of truth, of looking in the mirror and recognizing our own tendency to be complicit with sin – to protect the powerful and to cower in fear.  No, Harvey Weinstein’s fall should not cause us to gloat; it should instead drive us to our knees to repent. 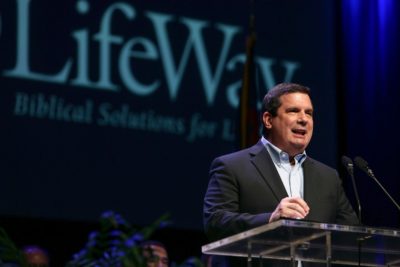 8 thoughts on “Weinstein’s Fall Should Lead to Repentance, Not Gloating”