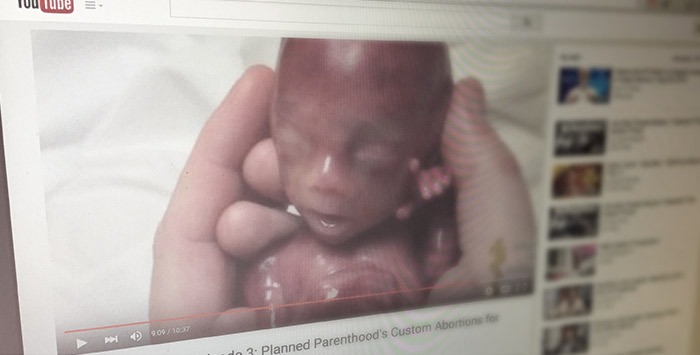 The Center for Medical Progress today released its seventh video, containing perhaps the most shocking revelation yet – evidence that Planned Parenthood is harvesting fetal organs from aborted babies who are still alive.

The video features testimony by Holly O’Donnell, a former procurement technician for StemExpress, a company that purchases fetal body parts from Planned Parenthood and then sells them to research facilities. As part of her job, O’Donnell would routinely go to Planned Parenthood clinics and help harvest fetal tissue and prepare it for shipping.

“It’s just really hard knowing you’re the only person that’s ever going to hold that baby. . . . I held him and I’m like, man, this could have grown up to be – and I always think about things like that – like if this could be a lawyer, this could be a firefighter. This could be the next president.” — StemExpress Procurement Technician

O’Donnell tells of a harrowing experience where she had to harvest a brain from a late-term aborted baby, who still had a beating heart. The incident reportedly happened in 2012 at Planned Parenthood’s Mar Monte’s Alameda clinic in San Jose, California. At about 3:45 into the video, O’Donnell describes a technician calling to her saying, “Hey Holly! Come over here. I want you to see something kind of cool. It’s kind of neat.” O’Donnell then recounts that she entered the room and was “flabbergasted” at the sight of “the most fully gestated fetus and closest thing to a baby I’ve seen.” Then, according to O’Donnell, the technician taps the heart and it starts beating.

“And, I don’t know what that constitutes,” O’Donnell says. “It’s technically dead — or, it’s alive?” Then, she describes the baby in detail and the horror of the task she’s asked to perform:

“And the face. It wasn’t completely torn up. Its nose was very pronounced. It, it had eyelids and its mouth was pronounced. And then, since the fetus was still so intact, she (the technician) said, ‘Okay, well this is a really good fetus and it looks like we can procure a lot from it. We’re going to procure a brain. . . What you do is you go through the face.’ And, I’m thinking, ‘No, I don’t want to do this.’ And, (the technician) takes the scissors and makes a small incision right here (pointing to under the chin) – and it goes, I would say, to maybe through the mouth. And she’s like, ‘Okay, can you go the rest of the way?’ And, I’m like (big sigh), ‘Yes.’ And, I didn’t want to do this. And so, she gave me the scissors and told me I had to cut down the middle of the face. And, I can’t even describe what that feels like. And, I remember picking it up and finishing going through the rest of the face and just picking up the brain and putting it in the container . . .”

During this description, the video shows a fully intact fetus on a metal table that’s still moving, courtesy of the Grantham Collection Center for Bio-Ethical Reform. The image may be somewhat confusing since viewers may think it represents the actual baby being described, which it does not. Still, the image and O’Donnell’s testimony represent a disturbing possibility — that babies are still being born alive and killed, despite the Born-Alive Protection Act of 2002, which outlawed the practice.

The video also features a surreptitiously recorded phone conversation between Dr. Ben Van Handel, executive director of Novogenix Laboratories, and an undercover investigator. Novogenix is a company that also harvests fetal organs from abortions done by Planned Parenthood. The investigator asks, “Is there still circulation in the heart once you isolate it?” Dr. Van Handel responds, “There are times when after the procedure is done that the heart actually is still beating.”

Also included is an undercover recording of an interaction with Perrin Larton, Procurement Manager at Advanced BioScience Resources, another company that procures fetal tissue from Planned Parenthood. Larton describes witnessing abortions where “the fetus was already in the vaginal canal. Whenever we put her in the stirrups, it just fell out.”

Previous videos by The Center for Medical Progress (CMP) also claimed that Planned Parenthood is harvesting organs from babies born alive and then killed. This latest video includes cuts from those videos, as well.

It features an excerpt from the first video where Planned Parenthood executive, Dr. Deborah Nucatola, describes how she modifies an abortion procedure to get a fully intact brain. Nucatola says she turns the baby breech so the legs and body can be delivered first. This helps dilate the mother’s cervix, so the head can come out intact. This procedure, however, is precisely the procedure used in partial birth abortion, something that was banned in 2003.

In partial birth abortion, though, the brain is usually suctioned out prior to delivering the baby. But, since Nucatola says she is doing the procedure specifically to secure an intact brain, it raises the possibility that these babies are being born alive and killed afterwards.

Another possible way to deliver an intact baby is to inject digoxin or potassium chloride into the uterus to kill the baby – and then deliver it after it is dead. However, on this latest video, David Daleiden of the Center for Medical Progress (CMP), describes why these drugs would never be used to deliver an intact fetus for medical research purposes. “Those are situations where no feticide like digoxin or potassium chloride, no chemical like that can be used to kill the fetus beforehand because that poisons the organs and the tissues,” Daleiden says. Then, Daleiden refers to video evidence he says CMP has showing top StemExpress executives discussing fully intact fetuses secured from Planned Parenthood. (This video has not yet been released due to a temporary injunction by a California Superior Court.) “And so, in that case, it’s prima facie evidence of born alive infant cases.”

This latest video closes with O’Donnell describing how she put the remains of the dead fetus into a container and regretted what she had done. “Even if it’s going to be good – if (the harvested tissue) could have been the cure for some kind of disease . . . Even if it was, I wish I still wouldn’t have done it. I don’t want to be that person.”

Then, she relays that she took the fetus out of the container, held it and cried. “It’s just really hard knowing you’re the only person that’s ever going to hold that baby. . . . I held him and I’m like, man, this could have grown up to be – and I always think about things like that – like if this could be a lawyer, this could be a firefighter. This could be the next president.” In that moment, O’Donnell said she decided she would quit her job with StemExpress.