It’s listed in Wikipedia as an evangelical parachurch organization that promotes “social conservative views on public policy.” But according to its 2016 IRS application and subsequent correspondence, Focus on the Family “was established and has been historically operated as a church.” Its nearly 600 employees are both its “ministers” and its “congregation.” Its board of directors are “elders.” And the church worships in Focus’ “chapelteria”—a cafeteria that doubles as a worship space.

Last week, the Washington Post reported on this “new strategy” among major evangelical organizations to become classified as churches and exempt from filing form 990s, which require them to report the salaries of their highest paid employees. Two other large organizations that have recently become churches or “an association of churches” include the Billy Graham Evangelical Association (BGEA) and Ravi Zacharias International Ministries (RZIM).

Both the BGEA and RZIM have ceased publishing 990s and executive salaries since officially becoming an association of churches. Focus on the Family apparently no longer files a 990 with the government. (The last 990 posted by ProPublica for Focus on the Family was for 2015.) However, Focus has posted a 990 for 2017 on its website. And Paul Batura, vice president of communications for Focus on the Family, told me that “in the interest of transparency,” Focus will continue to make financial information public.

The evangelical organizations deny that they sought to be classified as a church or as an “association of churches” to hide salaries and other detailed financial information. The BGEA said it sought the new status to avoid the administrative costs associated with filing 990s and said the change had nothing to do with the ongoing controversy over the large salary of BGEA CEO Franklin Graham.

When the BGEA received its new IRS classification in 2016, it promised to continue publishing Franklin Graham’s salary, but has not done so. I reached out to the BGEA more than two weeks ago, asking about this discrepancy and requesting Graham’s current salary. Media Relations Manager Mark Barber responded on January 3, letting me know that he had received my inquiry, but did not provide any of the requested information.

I similarly reached out to Ruth Malhotra, public relations manager with RZIM. She did not give a reason for RZIM seeking to be classified by the IRS as an association of churches, but simply noted that other ministries, like the BGEA, had done likewise. I asked Malhotra for the salaries of RZIM Chairman & CEO Ravi Zacharias; his wife, Margaret Zacharias, who was listed as RZIM vice-chairman; and his daughter, Sarah Davis, who’s the new CEO of RZIM. In 2015, when the organization still filed 990s, the ministry paid Zacharias and his wife more than a half-million dollars, and his daughter more than $215,000.

Malhotra responded that RZIM employs an outside consulting firm to help set the salaries of its employees and provided financial statements for 2016-2018. Malhotra did not, however, divulge the current salaries for Zacharias or any of his family members.

Focus on the Family said in its 2016 IRS application that it sought to become a church to avoid the Affordable Care Act’s mandate on insurance coverage for contraception and other regulations. More recently, however, Focus told the Washington Post that it made the change “to protect the confidentiality of its donors.” (The IRS requires nonprofits to report the names and addresses of donors giving $5,000 or more on a Schedule B form. However, organizations other than private foundations and Section 527 political organizations are allowed to redact those names and addresses when publishing their financial documents.)

Regardless of the reasons for changing IRS status, questions remain concerning the ethics of parachurch ministries claiming to be churches. By definition, parachurch groups are designed to come alongside churches, not be a church. Yet RZIM and the BGEA have said they are not claiming to be a church, but rather “an association of churches.” (The IRS classification for churches also includes “conventions or associations of churches.”)

(Interestingly, Mendelsohn serves as legal counsel to the ECFA‘s Commission on Accountability and Policy for Religious Organizations. Given that one of the ECFA’s 7 Standards is transparency, it might seem odd that an ECFA-affiliated lawyer would be helping a ministry become exempt from reporting its financial details to the IRS. Yet as I have reported extensively, the ECFA is paid by the ministries it accredits and often is nothing more than a rubber stamp for these ministries.)

When I pressed Butera about Focus on the Family claiming to be a church, he replied: “Since our inception in 1977, Focus on the Family’s ministry has included key elements of the IRS church classification, including daily devotion and Bible reading time, as well as regular chapel services.”

You can read Focus’ full arguments to the IRS in its application and complete correspondence with the IRS here. However, Dr. Wade Mullen of Capital Seminary and Graduate School recently highlighted the various arguments that Focus on the Family presented to the IRS in a series of tweets. They are an excellent synopsis, so I’ve copied them below:

A church needs a place of worship:

According to FoF, their dining hall doubles as a worship auditorium. They call it a "chapelteria." pic.twitter.com/btbJD7BEcZ

Churches give their members certain rights.

According to FoF, their "congregation" are encouraged to "participate in the religious functions of Focus on the Family," like Monday prayer meetings and devotional opportunities.

As expected, this "congregation" does not vote. pic.twitter.com/VQewoqVls5

According to FoF, their "congregation" participates in communion every Easter during a chapel service. All other functions (baptisms, weddings, funerals) are supposedly conducted by the "congregant's" other church. pic.twitter.com/o7hJz9Tg5u

Churches are sometimes affiliated with other churches.

According to FoF, the offices they have in 13 other countries are the "churches" they affiliate with. pic.twitter.com/Ul3y3KCzpt

A church usually has a religious history.

According to FoF, their organization has been evolving into a church in the same way that John Wesley started his "Holy Club" that evolved into Methodism, and is beginning to resemble other churches as it continues to institutionalize. pic.twitter.com/g0nm0zMdCT

Churches should have both an equipping and service role.

But according to FoF, they are one of two blades in a pair of scissors. FoF is the "service and mission" blade and the "congregant's" other church is the "teaching and equipping" blade. Together they comprise the Church. pic.twitter.com/ZqDVrs61wt

When the IRS asked about membership being tied to employment, FoF claimed that since they invite visitors and volunteers to join their "services," then membership is not "in fact contingent on employment." pic.twitter.com/0icwGmKA0H

When the IRS suggested there was nothing distinctive that would cause "a group of believers to coalesce around you," FoF chided them for their "ecclesiastical judgment" and argued their group of believers are among the largest in the world – 5.5 million nationwide. pic.twitter.com/uJMCR1KH61

Finally, when the IRS questioned their real purpose for using facilities for "some religious activity in the course of their work day," FoF chided them again for their "ecclesiastical judgment" and argued their members engage in "religious activity, all day, every day." pic.twitter.com/P5pJ31njc1 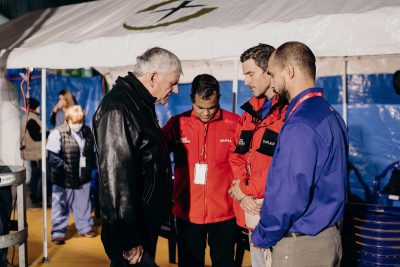 35 thoughts on “Are Focus on the Family, BGEA, & RZIM Churches? And Should They Be Exempt From Reporting Salaries of Executives?”