A large billboard bearing former President Donald Trump’s image next to a Bible quote appeared on a northwest Georgia road late last week. The ad, comparing Trump to Jesus, disappeared a few days later, leaving behind a flurry of confusion and outrage.

“Unto us a son is given, and the government shall be upon his shoulders,” the sign read, ending with “Joint Heirs, Romans 8:17.”

After a photograph of the sign found its way to social media, critics quickly pointed out that the verse is from the book of Isaiah 9:6, not Romans. Its words are often interpreted to be a prophecy of the return of Jesus Christ.

Romans 8:17 reads, “Now if we are children, then we are heirs — heirs of God and co-heirs with Christ, if indeed we share in his sufferings in order that we may also share in his glory.” This passage is largely considered to mean that we are God’s children, and, if we share in Jesus’ suffering, we are also heirs to the kingdom of heaven.

The apparent misquote, as well as the suggestion that Trump is the messiah, generated immediate backlash across social media from Christians and non-Christians alike. There were calls of blasphemy and accusations of violations of church and state.

Retired Chattanooga pastor and hospital chaplain Bill Bond tweeted, “People just over the border in Georgia seeking to redefine blasphemy. And doing an excellent job at it.” Bond was the first to post a photo of the billboard on Twitter.

Dr. Jeffrey L. Scott, an educator in nearby Dade County, Georgia, tweeted, “As a Christian and proud American I find this very disturbing, I would be troubled no matter the president.”

The billboard is situated on a well-traveled commuter route in Fort Oglethorpe, Georgia, near the border of Tennessee. Historically known for being the site of the second-deadliest Civil War battle after Gettysburg, the area is a Republican stronghold represented by U.S. Rep. Marjorie Taylor Greene. Catoosa County residents voted overwhelmingly for Trump in the 2020 presidential election. Most recently, Greene and U.S. Rep. Matt Gaetz stopped in nearby Dalton, Georgia, on their “America’s First” tour.

It is not known who sponsored the billboard message. The sign is owned by Reagan Outdoor Advertising based in Salt Lake City, which has a history of political involvement in Utah but is not reportedly responsible for the Georgia sign.

When you’re not the Anti-Christ but your followers think that would be a good idea.

People just over the border in Georgia seeking to redefine blasphemy. And doing an excellent job at it. @BrianZahnd @keithgiles #isaiahwasnottalkingabouttrump pic.twitter.com/QJ7PWZgEJw

Scott Hibberts, general manager of Reagan’s Chattanooga office, told The Chattanooga Times Free Press that the company “supports our advertiser’s First Amendment rights and the use of our displays to promote legal products and services, as well as other messages that may be editorial in nature,” adding, “as long as those messages are not offensive to the moral standards of the community, do not provide misleading or false statements, and are legal.”

The Trump sign was reportedly placed for a client of Atlanta-based company Impact Outdoor Media. The media company did not respond to a request for comment.

The Catoosa County Republican Party also denied any involvement and had no further comment on the billboard’s message or origins.

The location chosen for the sign suggests that it was intended to speak to Trump’s loyal base by making the connection between the voters’ strongly held political and religious beliefs.

If so, it seems to have misfired. “I didn’t really think anything about it. Didn’t make any sense,” said a local resident who asked to be identified only as Scott and whose business sits in the shadow of the sign. He said, “Mixing religion and politics together seems like a bad idea.”

He added that he hasn’t heard any buzz for or against the sign. Other locals reported not noticing it.

In 2018, residents of St. Louis County, Missouri, were treated to a similar billboard that read: “Make the Gospel Great Again. The word became flesh — John 1:14.” According to reports, residents there were also confused by the message, wondering if it was suggesting that Trump was the messiah.

Conservative politicians have been riding a wave of messaging merging often extremist Christian language and political partisanship. At a crowded 2020 rally in Macon, Georgia, then-Senator David Perdue suggested Trump had been sent by God. “He didn’t happen by accident. How in the world, in our political system, could Donald J. Trump come on the scene in 2016 and do what he did? Tell me. God’s watching.”

A woman at the May 2021 “America’s First Rally” in Dalton reportedly likened Rep. Greene to Jesus, telling CNN, “You don’t need me to tell you, a lot of people don’t like Marjorie Taylor Greene. That’s okay because you know what? A lot of people didn’t like Jesus Christ.”

When it comes to politics, there are few things Democrats and Republicans agree on. One exception: Making America officially a Christian nation 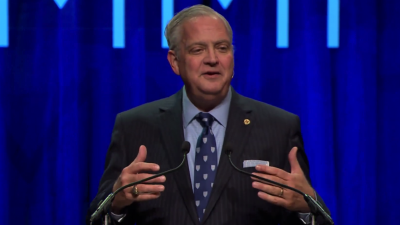 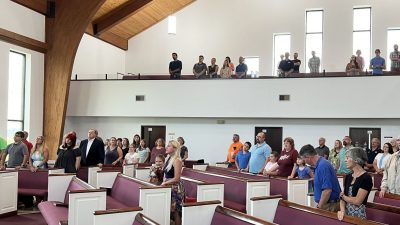 This one-time farm town of Marysville, Ohio, about 30 miles northwest of Columbus, is booming. The century-old Marysville Church of Christ is not. Even

17 thoughts on “Base Booster or Blasphemy? Bible-Quoting Pro-Trump Billboard Raises Eyebrows in Georgia”