About eight years ago, my husband and I joined a small group of Christians campaigning to elect three fellow Christians to our local school board. Our campaign didn’t begin as a school board race, but as a simple request to allow our children to read alternative books.

One of my neighbors had alerted me and several others to a novel our children were assigned that was essentially a primer to the hook-up culture. It chronicled a young man’s coming of age, which included a graphic sexual encounter and allusions to several others.

Naively, I thought that when we respectfully expressed our concerns to the school board, they’d grant our reasonable request. After all, we weren’t asking for any books to be removed from the curriculum; we were simply asking for options for our kids.

Boy, was I wrong.

Board members ridiculed and scorned us, and some teachers became antagonistic towards our children. Quickly, we realized the only way to have a voice on the school board was to elect board members who shared our beliefs and values.

We researched prior school board elections and learned that very few people vote in local elections. If we could just mobilize the faith community, we reasoned, we’d win in a landslide. But mobilizing the faith community proved much harder than we imagined.

“I don’t think that we’re prepared for what is coming . . . (M)any of us are complacent and we’re unaware and this means that the people in our churches are going to be blindsided by what comes.”

Time and time again, when we’d talk to our Christian neighbors, they’d express appreciation for our cause, but refuse to help. “I’d really love to help,” they’d say, “but I’m afraid if I do, Johnny will experience backlash at school. Teachers might give him a lower grade. Classmates might make fun of him.”

The campaign, which we lost, was disillusioning to say the least.

I thought about that experience this week when I heard Pastor Andrew Brunson’s message to pastors at the Southern Baptist Convention Pastor’s Conference. Brunson, who spent two years in a Turkish prison for his faith, told the gathering that the American church isn’t prepared for the persecution he believes is imminent.

“I don’t think that we’re prepared for what is coming,” Brunson said, “especially the next generation. I fear that many of us are complacent and we’re unaware and this means that the people in our churches are going to be blindsided by what comes.”

I think Brunson is spot on and immediately resonated with his message. If the majority of Christians shrink from a simple school board race where the consequences are relatively minor, what’s going to happen when following Jesus requires actual sacrifice? And what are we teaching our children when we take the path of least resistance? Are they learning courage from us or cowardice?

This past year, I witnessed similar dynamics as I was investigating James MacDonald and Harvest Bible Chapel. I marveled at those who risked jobs, ministries, friends, or reputations to tell me their stories. But these courageous ones seem to always be the minority.

Yet persecution is coming. Christians are the most persecuted group in the world. And we’re kidding ourselves if we don’t think that persecution will come here. For some, like the Christian professor who was fired for challenging students’ liberal beliefs about sexuality and marriage, it already has. Fortunately, that professor, Eric Thompson, was reinstated after an arbitrator ruled in his favor. But these freedoms are eroding in the West. And it’s just a matter of time before we’ll have to choose between fidelity to Christ or our jobs, friends, and homes.

When I posted Brunson’s comments on Facebook, someone understandably asked how it is that we can prepare for persecution. I’m no expert on persecution. And I haven’t been through anything that comes even close to what Pastor Brunson has endured. But I wonder if we aren’t going about preparing for persecution all wrong?

If we are compromising our faith now to avoid minor consequences, we should not expect we will become bolder later when faced with even greater consequences.

For many, we think of preparing for persecution much like someone might prepare for a hurricane. We store up and hunker down and wait for disaster to strike.

Instead, Scripture admonishes us to embrace suffering now, whether that means engaging in a school board campaign, publicly exposing sin, or a myriad of other acts of obedience that result in personal loss or pain.

Jesus said, “If anyone would come after me, let him deny himself and take up his cross daily and follow me.” If we aren’t bearing a cross, it’s likely not because we live in the West, but because we’re disobedient.

I have been following Jesus nearly all my life. And I’ve never known a time when being a Christian has been easy. I have, however, seen Christians living an easy lives.

I fear that when real persecution comes to the West, the majority of professing Christians will amend their beliefs or behavior just enough to escape any real consequences. I pray regularly that will not be me, and I am well aware of my own tendency to avoid pain. Truthfully, none of us know how we will perform under extreme circumstances.

However, I remember a Christian brother in a former communist country once being asked what he would do if the government once again forbid him from preaching the gospel. His answer was humble, yet profound. He said, “I pray that God gives me the strength to follow through on the decision I’ve made today to follow Him, regardless of the consequences.”

The time to say yes to our cross is now. As James 1:3 says, the testing of our faith produces perseverance. So the best way to prepare for persecution later is to embrace hardship now.

I pray today that we all become more faithful now. I pray, too, that we become stronger, and increase our ability to withstand what’s coming next. 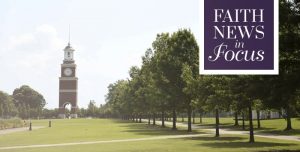 Union University is withdrawing from the Council for Christian Colleges and Universities (CCCU), and many more may follow, because the CCCU refused

26 thoughts on “How Can We Prepare for Coming Persecution?”