Christian author Matthew Paul Turner came out as gay today on Facebook and Instagram and announced that he and his wife, fellow writer Jessica Turner, are divorcing.

Matthew Paul Turner is the former editor of CCM, a magazine covering contemporary Christian music, but he is best known for his rhyming children’s books published through Convergent, an imprint of Penguin Random House. His 2019 book “When I Pray for You” is a Today, Publisher’s Weekly and Wall Street Journal bestseller with more than 100,000 copies in print.

“(A)s someone who spent 30+ years in fundamentalist/evangelical churches, exploring God through conservative theologies, I’ve lived many days overwhelmed by fear, shame, and self-hatred,” Turner wrote in a Facebook post. “But for the first time in my life, despite the sadness and grief I’m feeling right now, I can say with confidence that I’m ready to embrace freedom, hope, and God as a gay man.”

Jessica Turner also shared a Facebook post this morning. “We are moving forward with ending our marriage, while remaining deeply committed to our family and each other,” she wrote. “We are all adjusting to a new normal, with our home now extended under two rooftops.”

The two were married in 2004 after meeting online and quickly bonding over their interest and involvement in CCM. The couple now has three children.

“I fell in love with her 17 years ago and still love her deeply,” Turner wrote. “Despite her own grief and pain, she has loved and encouraged me to be fully me.” The couple lived in Nashville, Tennessee, with their three children.

They did not say when their divorce will be finalized.

In his book, “Fear No Evil,” Turner describes growing up in a conservative Independent Fundamental Baptist Church where he said his belief in God was rooted in fear of damnation — he was taught musical syncopation was sinful and said he didn’t set foot in a movie theater until age 19. He writes that his faith evolved over the years, and eventually Turner launched a blog called “Jesus Needs New PR” and became a part of more progressive Christian circles.

“Though my own faith evolved long ago to become LGBTQ+ affirming, my journey toward recognizing, accepting and embracing myself took much longer,” Turner wrote in his post.

His now progressive faith is reflected in his children’s books, which emphasize God’s love, as well as his other writings. Turner said he would continue to write children’s books with the support of his publisher.

Jessica Turner is founder of popular blog The Mom Creative and of the 2018 book Stretched Too Thin: How Working Moms Can Lose the Guilt, Work Smarter, and Thrive. She writes about family, motherhood, DIY hacks and savings tips. 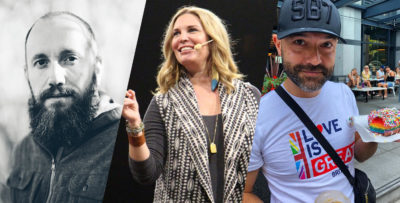 In recent times, we have seen a litany of Christian influencers falling away from biblically grounded Christianity. Best-selling author and pastor, Joshua 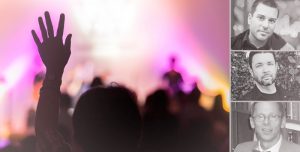 Rewind: Highlights from the Discussion on CCM

Few things elicit as much passion in Christians as worship. In preparation for last Saturday’s show, I posted an article to Facebook