Tanks. Bombs. Guns. He survived them all in the besieged city of Mariupol, Ukraine.

Now Artyom Kirilenko drives back into danger, again and again.

Just weeks ago, Kirilenko, a member of the Mariupol Church of Christ, huddled in his apartment with his wife and their 5-year-old son during a nighttime air raid. The explosions were so bright “it looked like daylight through the cracks in the door,” he said. “At that point I understood the verse, ‘Pray without ceasing.’”

From the relative safety of Ivano-Frankivsk in Ukraine, 750 miles west of Mariupol, he speaks with media about the war he’s lived — one waged by forces claiming they’ve come to liberate Russian speakers like him.

They’ve also given him an opportunity for which he’s yearned since his teen years. He’s part of a band of brothers, nearly 50 in all, who load vans with water, ramen noodles, diapers and vitamins and drive from western Ukraine to the hard-hit cities of the east. They unload the supplies and ferry back women and children.

Like many of the drivers, Grischuk has been displaced twice — first from the eastern city of Donetsk and then from Ukraine’s capital, Kyiv, where he taught at the Ukrainian Bible Institute.

“This is my second war” in eight years, Grischuk said. “This is the second time I lost my home.”

Kirilenko is 33 — “Jesus’ age,” he said, referencing how old Christ was thought to have been when crucified.

“I have long wanted to serve the Lord, but my work has kept me from it,” said the former factory worker, who made parts for cars and mining equipment in Mariupol before the bombs started falling Feb. 24. “But now, because of this situation, I can devote myself to his service.”

A city at war

Ivano, as it’s called, is the current home of Let’s Love. The western Ukrainian city has a quarter-million souls — plus a host of refugees from the east.

Some dressed in polos and khakis, others in combat fatigues, they spend a sunny Saturday afternoon in the pedestrian-only downtown squares as fighter jets circle overhead. Coffee shops sell lattes near tents set up by UNICEF and the Order of Malta.

A trio plays Ukrainian songs on violin and bass. Nearby, a guitarist accompanies a young woman as she belts out the lyrics to the Cranberries’ “Zombie,” a song about the deaths of children during “the Troubles” in Northern Ireland and the long-term effects of trauma.

An igloo of sandbags encases one of the city’s historic statues outside the Nadiya Hotel, which instructs guests to turn off their lights after a 10 p.m. curfew, lest they present a target for Russian bombers.

‘The taste of bread’ and tears

With curfew in mind, Let’s Love hosts an early dinner for its drivers and a few American visitors at a barbecue restaurant just outside the city.

After they pray, the aid drivers pass around heaping plates of salad, grilled chicken, steak and baguettes.

“I had forgotten the taste of bread,” Kirilenko says as he and his brother-in-law, Egor Chalenko, continue the story of their exodus from Mariupol. “I dreamed about bread.”

At first, they cut wood from a forest near their apartment and made small fires to cook in the snow. But after the apartment was destroyed, they fled to a shelter near the heart of the city. For four days they had one-and-a-half liters of water for six people. At night self-appointed militia men, often drunk, would demand that they flee the bunker. They refused.

When there were lulls in the gunfire, they would forage for food and supplies and try to find a place where they could get a cell signal. They passed “so many dead bodies,” Kirilenko says. “I would walk with tears in my eyes.”

They got word that an evacuation corridor had opened, and they joined a caravan of cars. Hours later, as they finally left Mariupol and entered a nearby village, they saw Ukrainians standing on street corners, crying as they pointed motorists toward the escape route. Much of the journey was in the dark through open fields. Constantly, they feared that they would drive over a landmine.

After 15 hours in the car, they arrived at a safe haven — the parking lot of Epicentr, a home improvement store in the city of Zaporizhzhia. A minister for the Church of Christ there had an apartment waiting for them — and a loaf of bread.

‘I thank God we made it through’

Their wives and children continued west and now are living as refugees in the Czech Republic. Kirilenko and his brother-in-law, Chalenko, began working with Let’s Love. They’ve made four trips from Ivano back to that Epicentr parking lot, more than 600 miles one way, to deliver aid and relief supplies and to shuttle refugees back westward.

Along the way, they share their faith in Jesus.

Brandon Price translates their story from Russian to English. He is a former missionary in Mariupol and the eastern Ukrainian city of Kharkiv. In 2014 the Kharkiv Church of Christ became a receiving point for people displaced by the Donbas conflict.

That same year the Ukrainian Bible Institute, formerly in the Donbas city of Donetsk, moved to Kyiv. Price became director of the institute in 2019. When the war started in February, he and his family traveled to Sopot, Poland, and worked with a Church of Christ there serving fellow refugees.

Kirilenko was 14 when he met Price in Mariupol. Even then, “he wanted to learn how to preach,” Price said. “He told me, ‘I’m going to have to grow up and share God’s Word.’” He sparked the launch of a “how to teach the Bible” class.

As Kirilenko shares his story, a few of his fellow drivers leave their seats and gather around him. One of them, Dennis Zolotaryov, says, “It’s important for a minister to go through these difficult times because then you are better able to help others.”

When asked if he ever questioned God during his ordeal, Kirilenko quickly replies, “Da, da” (“yes, yes”). But now, “I think this is his work,” he says. “And I thank God that we made it through.”

As Kirilenko returns to his plate of food, now cold, Zolotaryov leans forward and holds up a finger.

“That’s just one story,” he says. Around the table are many, many more.

‘Today we are citizens of heaven’

Before the teams of drivers depart for another trip eastward, they worship with a Church of Christ that meets in an apartment building in Ivano. They maneuver past stacks of relief supplies, ready for transport, to reach the church’s auditorium.

Wearing a bright blue and yellow sweatshirt — the colors of the Ukrainian flag — Romanian minister Adi Voicu brings the church greetings from their fellow Christians across the border.

Voicu has made multiple trips across the border, bringing supplies and shuttling refugees. Churches of Christ in Romania are housing and baptizing refugees, he says.

When the war ends, “Be ready to welcome them warmly into your family,” Voicu says. He quotes from Philippians 3:20: “But our citizenship is in heaven.”

Valeriy Kolchik, a minister from the northeastern Ukrainian city of Sumy, teaches on the parable of the sower from Matthew 13. Kolchik now ministers for the Ivano church, along with Eugene Dovzhenko.

“It’s true that the war in Ukraine has shaken the whole world,” Kolchik says in Russian as Dovzhenko’s wife, Anna, translates to English. “And through this God has the opportunity to plant.”

Not all of the seeds planted during the war will take root and survive, Kolchik says, but Christians are instructed to spread the gospel — regardless of the soil.

“The world will not harden our hearts,” he says. “What will happen if the war comes to Russia? Will we tell them you got what you deserved? Or will we give them a cup of water?”

Stories ‘you want to forget’

The service concludes with prayer requests. Victoria Virkhovska asks on behalf of her son, serving in the military.

She tells the church that she has just dreamed about three cups that filled with wine, representing the prayers of God’s children. The first cup represented the years before the war. It filled slowly. The second was the weeks after the war. It filled quickly.

But the third filled halfway and paused. Then “a creature knocked it over,” she says. “I ask you, in this moment, keep praying.”

Fedya Chernichkin, one of the drivers for Let’s Love, stands before the congregation and talks about his adopted grandfather, a hero of the Soviet Union who fought against the Nazis in World War II. Chernichkin pleaded with him, “Tell me how you were a hero.” But he never spoke about the war.

Chernichkin understands that now. He’s made supply runs to Kharkiv, where “every other home is destroyed,” he says. While he was loading for the return journey, an explosion shook the ground and made his car bounce on its tires.

The locals didn’t even flinch, he said. “Don’t worry,” they told him. “It’s Ukrainians firing mortars. It’s not a tank.”

“There are stories you see during war that you want to forget,” Chernichkin says. But there are good stories, too. Fighting back tears, he talks about how the people he serves respond to even the simplest of gifts.

“When you can only give them one kilo of grain, they are so thankful,” he says. 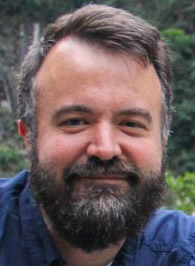 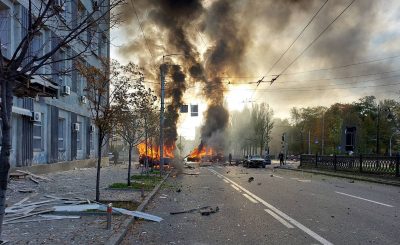 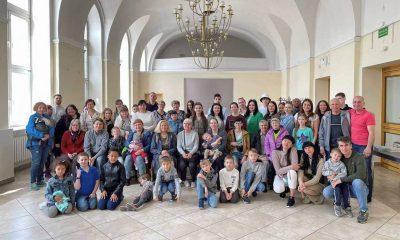 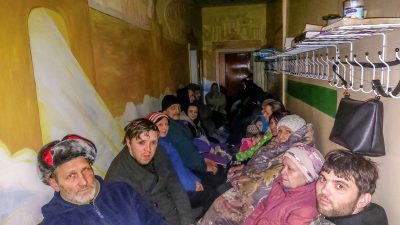