This article first appeared on the Religion News Service website on October 26, 2017.

Today Brandan Robertson is a leading voice among LGBTQ-affirming Christians.  But 10 years ago, he was a new believer from an alcoholic home, trying desperately to live up to his fundamentalist church’s ideal of manhood. And failing miserably.

“According to many in my community,” Brandan wrote, “I was failing to live up to God’s standard. I was shamed by my pastor for doing ‘sissy work’ when I wanted to be in the office instead of outside doing manual labor. My youth pastor made me leave a funeral service because I was crying. He told me, ‘If you want to be a pastor, you’ve got to learn to be a man. Men don’t cry.’ ”

I’ve thought of Brandan’s experience several times in the past few weeks as the Harvey Weinstein scandal and #MeToo movement have revealed a perverse and predatory manhood that is epidemic our society. In times like these, the church should be a beacon to society, and I’m sure certain segments of the church are.

“In times like these, the church should be a beacon to society . . . Yet as Brandan’s experience shows, the vision of manhood in some of our churches isn’t much healthier than the world’s.”

Yet as Brandan’s experience shows, the vision of manhood in some of our churches isn’t much healthier than the world’s. And if the recent account of hazing at Wheaton College is any indication, a diseased form of hyper-masculinity thrives not just in fundamentalist churches like Brandan’s, but in more moderate evangelical circles too.

But it’s not just our notion of manhood that’s diseased.

Over three decades of ministry, I have seen both men and women struggle to live up to uni-dimensional caricatures of both hyper-masculinized manhood and hyper-feminized womanhood.  Men struggle to be David or Samson, capable of slaying giants and wild beasts.  And women struggle to be the Proverbs 31 Woman – a vision of womanhood that has become so idealized that even winners of beauty pageants feel they don’t measure up.

“In my mind, the Proverbs 31 Woman was meek, demure, maternal, and perfectly put together – like a sort of Sunday school teacher meets Stepford wife,” wrote former Miss USA Kristen Dalton Wolfe.  “I felt like my feisty, outspoken personality . . . and tendency toward frumpy attire disqualified me from ever being a Proverbs 31 Woman.”

Today, the church is struggling to find consensus on manhood, womanhood, gender and sexuality. Some like Brandan have defected from conservative churches, and now believe that manhood and womanhood don’t even exist.  Meanwhile many conservative churches are doubling down on their commitment to the historic Christian sexual ethic, while furthering ideas of manhood and womanhood that only alienate and wound people like Brandan.

But the visions of manhood and womanhood promoted by both these camps of the church are not the only two options.  In between both conservative and liberal extremes is a vision of manhood and womanhood that embraces sexual distinction, while also acknowledging the complexity and diversity both men and women possess. It’s a vision that affirms God’s creation of male and female, but avoids uni-dimensional masculine and feminine caricatures.

C.S. Lewis once wrote, “There ought spiritually to be a man in every woman and a woman in every man. And how horrid the ones who haven’t got it are:  I can’t bear a ‘man’s man’ or a ‘woman’s woman.’”  By this, Lewis was not advocating for androgyny or gender ambiguity.  Lewis simply was saying that men and women should possess some balance of masculine and feminine in degrees appropriate to their particular sex.

“(M)en and women should possess some balance of masculine and feminine in degrees appropriate to their particular sex.”

No one, for example, likes a man who is devoid of feminine characteristics and unable to show any compassion and tenderness.  Similarly no one likes a woman who is sickly passive and lacks the ability to exert her will.  That’s because masculine and feminine are twin attributes of God.  And as the ones who bear His image, we should possess some degree of both these qualities too.

Though certainly Scripture refers to God primarily in masculine terms as “Father,” the Bible also employs feminine imagery for God.  In Isaiah 66:13, God says, “As a mother comforts her child, so will I comfort you.”  Likewise, Jesus laments in Luke 13:34, “Jerusalem, Jerusalem . . . how often I have longed to gather your children together, as a hen gathers her chicks under her wings.”

This does not mean God is equally mother and father.  As Lewis notes in That Hideous Strength, “What is above and beyond all things is so masculine that we are all feminine in relation to it.” In other words, God relates to us as masculine.  He always initiates; we always respond.  And as Elisabeth Elliot rightly taught, the “distilled essence of masculinity” is initiation, and the essence of femininity is response.

Yet just as God is not singularly masculine, neither should we be singularly masculine or feminine.  Author and founder of Pastoral Care Ministries, Leanne Payne, wrote, “We in His image, are most surely – in our spiritual, psychological, and physical beings – bipolar creatures.  Our Creator, holding all that is true and real within himself, reflects both the masculine and the feminine, and so do we.”

This is a perspective that is woefully lacking in the church, and it’s hurting both men and women.  Though I believe God made us male and female, I don’t believe He made us singularly masculine or feminine caricatures that fit into the narrowly constructed models many churches uphold.  Each of us is unique.  And trying to squeeze men and women into these false models of manhood and womanhood can cause profound damage.

Like Brandan, I too struggled to fit the mold of my gender that many in the church communicated.  Growing up, I was a quintessential tomboy.  And though I liked stereotypically feminine things like dolls and playing house, I really loved sports.  I also loved debating issues, and would often engage in lively discussions with boys.

“My family delighted in my atypical nature, but in the church I sometimes struggled. I didn’t fit the meek portrait . . . “

My family delighted in my atypical nature, but in the church I sometimes struggled.  I didn’t fit the meek portrait upheld by some. And no doubt, I also had some rough edges that needed softening.

But no one belittled me for my imperfections.  And fortunately, God placed me in a wonderfully accepting Christian community where people blessed my more stereotypically masculine traits and saw them as reflections of my Maker.  But they also encouraged me to embrace and develop my more feminine side, which for various reasons, had lain somewhat dormant.

These dear brothers and sisters didn’t deny that manhood and womanhood exist.  But they didn’t foist on me some truncated vision of womanhood either.  They affirmed what was true.  Gently corrected what was disordered or false.  And over time, I began to blossom – as a wife, a mother, and a more healthy and balanced woman.

I wish more people had access to Christian communities like the one that nurtured me – communities that advance healthy visions of manhood and womanhood, and encourage people to grow, rather than merely conform.

Communities like this would revolutionize the church and transform it into a place of healing, rather than one of wounding.  And they would actually attract those struggling with their gender and sexuality, rather than driving them away.

I discuss these issues further in “Redeeming the Feminine Soul: God’s Surprising Vision for Womanhood.” Order now! Still 1/3 off the list  price! 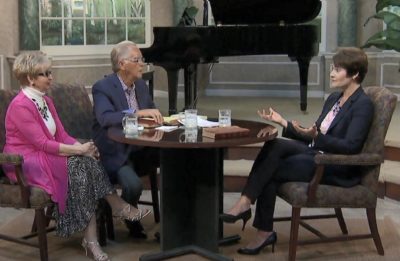 What is True Womanhood? — An Interview with Herman & Sharron of Christian Television Network

Should women seek to emulate the idealized Proverbs 31 woman, who’s supposedly meek and demure? Or, in the words of feminist Gloria 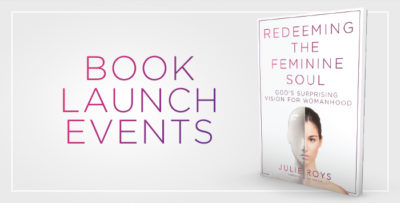 After months of writing, editing, and preparing, I am excited that my book Redeeming The Feminine Soul is finally hitting bookshelves! There