When Pastor Mark Driscoll told Joey Manuele and his fiancée at a staff Christmas party that he’d pay for their honeymoon, Joey Manuele was stunned.

“I really just didn’t want to accept it,” said Joey, who until recently was a staff intern at Driscoll’s The Trinity Church in Scottsdale, Arizona. “It was too nice. And I was like, ‘How could you do that?’”

But Joey said after several days of discussing the offer with his fiancée, Kaelyn (Uribe) Manuele, he relented. Kaelyn then emailed Driscoll, accepting the gift and thanking him for the “kind gesture.”

The next day, the young couple got a response from Mollie Hanke, Driscoll’s executive assistant, offering to arrange everything for their stay at a local resort.

Because of an apparent snafu when booking, Joey said the couple ended up paying for their two nights at the Omni Resort at Paradise Valley with their own credit card. But Joey said that when they contacted Hanke on their return, she assured them that they’d be reimbursed.

A couple weeks later, the Manueles received a check for the full amount. But to their surprise, the check wasn’t from Driscoll, but from The Trinity Church.

According to the Manueles and several former Trinity members who spoke with The Roys Report, this isn’t the only questionable financial dealing they’ve witnessed at Driscoll’s church.

Two families told The Roys Report that Trinity uses gift cards to pay its junior interns “under the table.”

Joey Manuele added that the honeymoon stay wasn’t the only unsolicited gift Driscoll gave him and his wife. Manuele said that when he first began interning at the church, he found a $100 bill taped to a whiteboard in the church office with the note: “Date night for Joey—PMD (Pastor Mark Driscoll).”

Manuele, whose entire family was recently kicked out of the church, said he now suspects the gifts were intended to buy his loyalty. (A previous article explains why the Manueles were kicked out of Trinity, as well as a zero-to-10 loyalty rating system Trinity uses to determine people’s access to the Driscolls.)

Another red flag former members noted is the apparent mingling of finances between Trinity Church and Real Faith.

Real Faith is the trade name for Mark Driscoll Ministries, a separate 501(c)3 organization, which pays Driscoll—its president and board member—a six-figure salary for a reported 25 hours of work a week.

Yet it appears that the director of Real Faith may be paid by the church, rather than by Real Faith. Similarly, a new building purchased by Trinity Church is reportedly used by both the church and Real Faith.

The Roys Report reached out to Driscoll for clarification and comment on all these issues, but he did not respond.

The Trinity Church runs two paid internship programs, according to several former Trinity families who spoke with The Roys Report. One internship is a staff internship for young adults aged 18 and older. The other is a “junior internship” for pre-teens and teens aged 12 to 17.

According to Joey Manuele, staff interns are paid extremely low wages. Joey said he initially got paid $500/month for 50 hours of work a week. After a few months, he said his salary increased to $1,000/month for the same amount of work.

Similarly, Chad Freese and his wife, Mary Freese, referred to the junior internship at Trinity as “slave labor.”

The Freeses had two daughters in the internship program. According to Mary Freese, Trinity promoted the program as a means of discipleship. In reality, though, she said the internship consisted mainly of babysitting and set-up and tear-down for church events.

But even more concerning, the Freeses said, is how Trinity pays its interns.

The Freeses said their children were paid exclusively with Visa gift cards. Vince Manuele—Joey’s 15-year-old brother who served as a junior intern—told The Roys Report he was paid in gift cards to stores like Target and Walmart.

She said the church urged women to bring gift cards to the dinners, which leaders said would then be used to help single mothers. She said the church did not issue receipts for the gift cards. There was simply a box in the lobby where people would drop off their donated cards.

According to Rusty Leonard, founder of the donor watchdog group MinistryWatch, paying interns with gift cards is a way to avoid paying employment taxes.

“It’s untraceable money,” he said. He added that using a donation for a purpose other than the purpose for which it was given violates IRS rules.

According to Joey Manuele and Chad Freese, Driscoll does not view The Trinity Church as a ministry that’s beholden to donors, but rather as a family business that’s owned and controlled by Mark Driscoll.

“It’s a family business here at Trinity,” the post read. “We had a Driscoll teach at Real Men’s tonight, but it wasn’t Pastor Mark.” 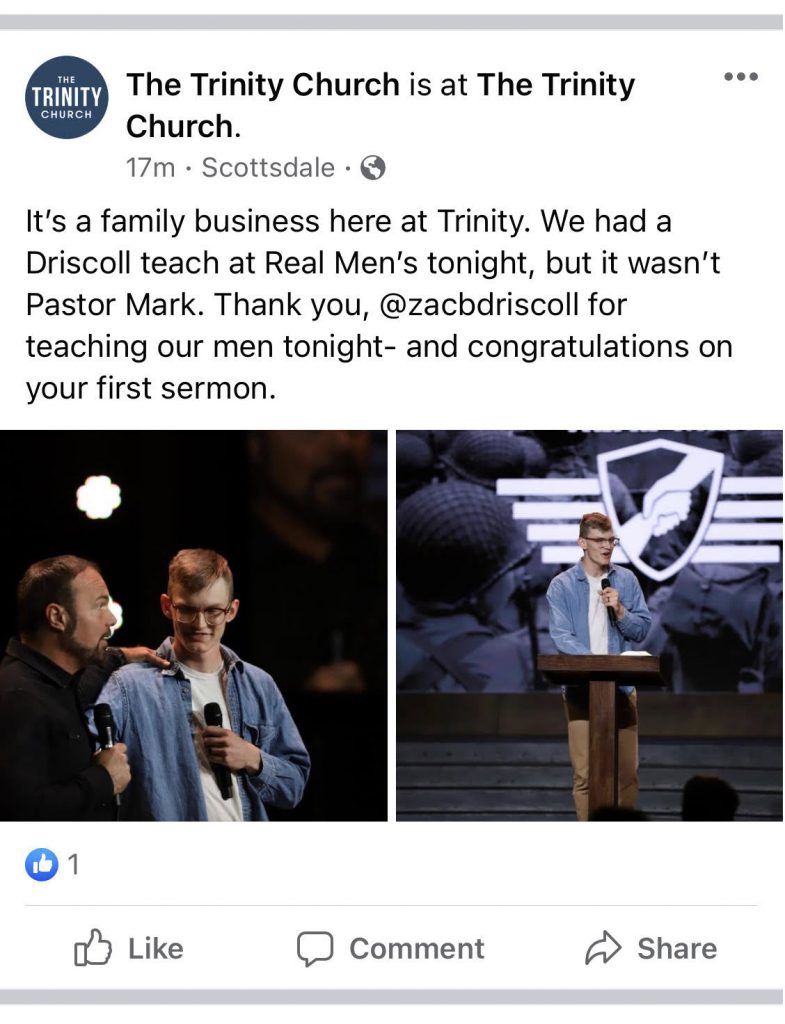 Hours later, the line about Trinity being a family business was deleted. 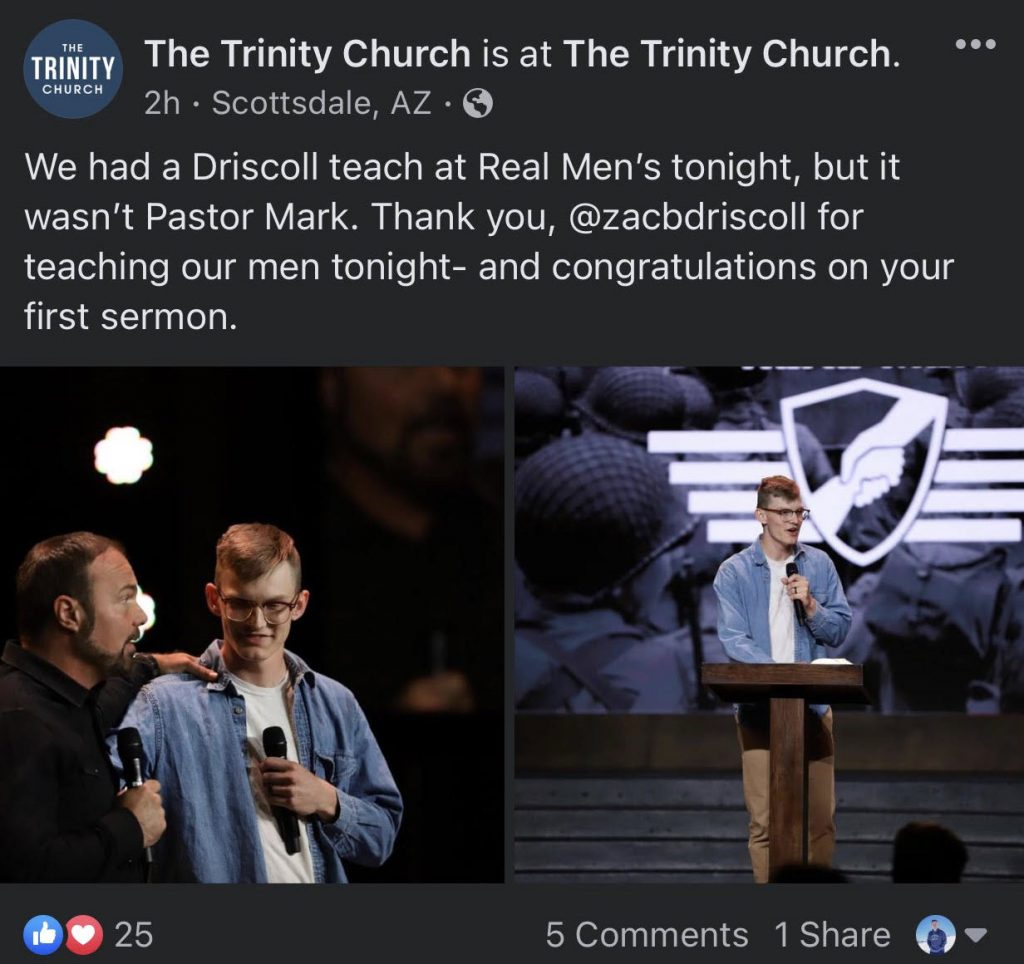 Yet as mentioned in a prior article, Trinity has no elders providing accountability for Driscoll and doesn’t publish a budget or financial statements. As a result, Driscoll unilaterally decides how church funds are spent, Joey Manuele said.

“(Driscoll) would just flat out say, ‘No one needs to know our financials, like it’s none of their business,’” Manuele recalled. “And he would just say, ‘This is our business, like, we started it as a family business . . . And he was like, if anyone asks, basically tell them to ‘screw off,’—like, that’s how he would say it. . . . He would always say, ‘Everything is directed from the senior pastor.’”

One apparent product of this philosophy of ministry is the use of church funds for Driscoll’s personal ministry, Real Faith, which not surprisingly, is headed by a Driscoll.

Driscoll’s daughter, Ashley Chase, is the director of Real Faith. Yet, on Trinity’s website Chase is listed in her capacity as Real Faith director as a staff member of the church. Chase also is not listed on the latest IRS 990 for Real Faith, even though the IRS requires nonprofits to report compensation paid to anyone related to a board member.

According to Freese, Real Faith also uses a warehouse The Trinity Church recently purchased for $740,000.

Freese said Chase’s office is located in the warehouse. (On Real Faith’s website, the address given for the ministry is 21001 North Tatum Blvd, Suite 1630-527. But as Warren Throckmorton reported in 2016, this address is not an office but a P.O. box.)

Similarly, Freese said the new recording studio in the warehouse is intended for recording music videos and other videos shown during Trinity’s services. But these videos also will be used for the worship portion of Real Faith.

According to Rusty Leonard, using church funds to support another nonprofit ministry is not illegal. Yet he said ethically, it’s something that should be disclosed to those who are donating, and the way the money flows should be explainable and defendable.

He added that given Driscoll’s track record at his previous church, Mars Hill in Seattle, Driscoll should be especially transparent and above-board if he’s trying to establish the legitimacy of his new ministry.

A pattern of financial misconduct?

One of the major issues at Mars Hill, which contributed to the church’s financial demise in 2014, was the practice of using church funds and resources to promote Mark Driscoll’s personal platform.

For example, in 2011 and 2012, Mars Hill paid a marketing company at least $210,000 to ensure that Driscoll’s book, Real Marriage, made the New York Times best-seller list.

And according to a memo by former Mars Hill executive elder, Sutton Turner, which was leaked to blogger Warren Throckmorton, church staff also promoted Driscoll’s book on church time. This reportedly included scheduling and arranging speaking engagements for Driscoll. According to Turner, this kind of misuse of church time was rampant at Mars Hill.

“Many times these personal ministries are done during staff time and using church resources,” Turner wrote. “This (was) actually encouraged when I first came on staff as it was explained to me that staff was able to take MHC time to do consulting work to supplement their income. At the very highest levels of the organization this was taking place and reproduced throughout the organization.”

Given Driscoll’s checkered past, Leonard said he would expect Driscoll to be especially transparent about his church’s finances, yet he appears to be doing the opposite.

“He doesn’t seem to have learned from his past foolishness,” Leonard said. “Where there’s a lot of smoke, there’s more than likely a fire . . . How big the fire is, is hard to say. But the smoke is real.” 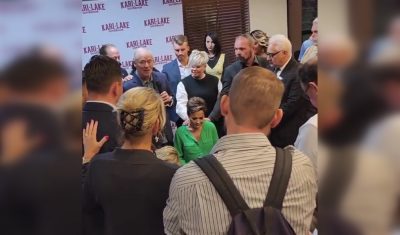 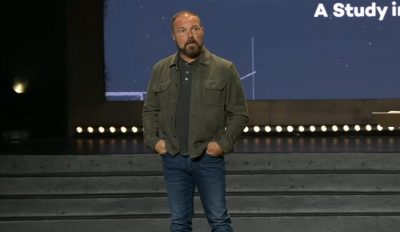