Eric Metaxas Sued for Defamation Over Claims of Voter Fraud

Besides Metaxas, the accused include the Donald J. Trump for President campaign, Sydney Powell, Rudy Giuliani, One America News Network and other groups, which made similar claims.

The lawsuit was first released in December, but modified this week.

“Coomer is the Dominion employee who has taken the brunt of these attacks,” the lawsuit states. “He was forced to flee his home in response to the credible threats he has been receiving and continues to receive. He has had to sever ties with friends and family members to stay in seclusion.”

According to the lawsuit, Oltmann claimed on Metaxas’ show that Oltmann had infiltrated an Antifa conference call, and that during the call, one of the speakers said: “Don’t worry about the election, Trump is not gonna win. I made f—ing sure of that.”

Oltmann reportedly told Metaxas that one of the people on the call was referred to as both “Eric” and “the Dominion guy.” The lawsuit states that Oltmann concluded from that information that Eric Coomer was on the call. However, the suit alleges that Oltmann never contacted Coomer.

Metaxas also made some strong statements about Dominion on his radio show. “This is everybody’s worst nightmare of deep state, George Soros,” Metaxas said. He added that Dominion “is operating all around the globe in elections” and “got started in Venezuela.”

Dominion’s website states that it has no ties to partisan political officials or their families. The organization was founded in Canada, not Venezuela, according to Bloomberg.

The lawsuit states that Coomer has sometimes criticized former President Donald Trump on his Facebook page, but adds, “Criticism does not denote conspiracy or fraud.”

The suit further states: “Metaxas also had no credible evidence that an ‘Antifa conference call’ actually happened; that Dr. Coomer was present on the call; that the comments attributed to Dr. Coomer were actually spoken; and that the alleged election fraud actually occurred,” the lawsuit states.

Metaxas also posted a video of Coomer on his YouTube Channel. In the video, Coomer explains Dominion’s voting system that allows state adjudicators to interpret ballots that machines can’t read.

Metaxas has increasingly been embroiled in controversy related to politics over the past several months.

On Sept. 3 of 2020, Metaxas punched a protester who biked past him while yelling “F— Trump,” after attending the Republican National Convention. Metaxas claimed the protestor attempted to intimidate him by rushing at him on his bike and that he acted in self-defense. The protester said he gave Metaxas no reason to attack him.

Metaxas also took part in the Dec. 15 Jericho March on Washington D.C. alongside thousands of Christians alleging election fraud. At the march, he introduced far-right conspiracy theorist Alex Jones as his friend.

“When God gives you a vision, you don’t need to know anything else,” Metaxas said at the event.

Coomer says the claims about him have devastated him both personally and professionally. He is seeking damages to his reputation and livelihood and, if he prevails, punitive damages.

Jackson Elliott is a Christian journalist trained at Northwestern University. He has worked at The Daily Signal, The Inlander, and The Christian Post, covering topics ranging from D.C. politics to prison ministry. His interests include the Bible, philosophy, theology, Russian literature, and Irish music.
SHARE THIS: 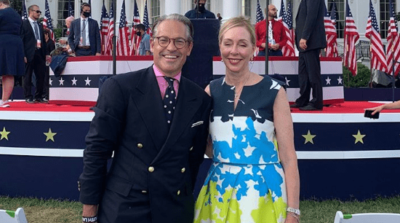 Eric Metaxas Says Protester Menaced Him, but Won’t Say Whether He Punched the Man

Popular Christian author and radio host, Eric Metaxas, told a Christian magazine that a protester on a bike harassed him after he