Al Mohler, president of Southern Baptist Theological Seminary, sparked controversy this week by stating that Christians are “unfaithful” if they “vote wrongly.” Mohler is a staunch Republican, and many interpreted the comments as condemning Christians who vote Democrat.

The comments were made Wednesday at the Family Research Council’s Pray Vote Stand Summit in Atlanta, Georgia, and sparked strong backlash.

“Here we have a sitting president of an sbc (Southern Baptist Convention) seminary who is emphatically saying to vote ‘wrongly’ matters to God,” tweeted prominent Texas Pastor Dwight McKissic. “Voting ‘wrongly’ to Mohler means voting Dem. God is not a Dem or Republican. To imply that voting exclusively Republican is God’s choice defies Jhn. 18:36”

In a follow-up tweet, McKissic said Mohler had also “categorized 90% of African Americans as non-Christians. This statement places the SBC in opposition to Black Christians. Painful & shameful.”

Mohler is saying if you don’t vote Republican, you aren’t a Christian. He just categorized 90% of African Americans as non-Christians. This statement places the SBC in opposition to Black Christians. Painful & shameful. https://t.co/dsw9GBO8fn

Expressing a similar view was popular author and historian, Beth Allison Barr. She tweeted: “Because I thought being a Christian was about Jesus. Who knew it was actually about voting Republican.”

Because I thought being a Christian was about Jesus. Who knew it was actually about voting Republican.

Likewise, Scott Coley, a philosophy professor at Mount St. Mary’s University, tuiteó: Either evangelical gatekeepers have lost the ability to distinguish their own opinions from the will of God, or they’re aware that they have no actual argument to make and so they’ve resorted to claiming that we should share their opinions because God says so.”

Mohler responded to the backlash boldly.

“If you are offended that I encourage Christians to vote FOR candidates who defend the unborn and support the integrity of marriage and to vote AGAINST candidates who support abortion and subvert marriage, that has been my message for my entire adult life,” he tweeted.

Mohler directed people to su sitio web and added, “It’s not like the argument is in secret code. I am confident the vast majority of Southern Baptist agree.”

It’s all there on the record in written form for you to read. Better make a strong cup of coffee, there are a few million words. I direct you to https://t.co/Frg6grY0D6. It’s not like the argument is in secret code. I am confident the vast majority of Southern Baptists agree. 2/2

Similarly, John Kuykendall, pastor of a Baptist church in Missouri, tuiteó, “Keep standing. Those who are offended deserve to be so.”

But others took exception.

“To be clear . . . I renounce his statement and I believe that a fair segment of the SBC joins me,” tweeted Dave Miller, un SBC pastor from Sioux City, Iowa. “We are saved by grace, not by voting GOP. . .”

Pastor Joel A. Bowman Sr., a Black pastor whose church recently left the SBC, tuiteó that Mohler had “doubled down on his belief that the bulk of Black Christians are ‘unfaithful’ because they vote for Democrats. . . . (T)he SBC is not a very safe place for Black people.”

Bowman added in a follow-up tweet, “When the seminary presidents are willing to oppose what they deem to be ‘critical race theorists,’ rather than racists like Donald Trump as well as Christian nationalism, that tells me it’s not safe.”

When the seminary presidents are willing to oppose what they deem to be “critical race theorists,” rather than racists like Donald Trump as well as Christian nationalism, that tells me it’s not safe. In fact, Mohler has embraced these.

Some pointed out that in 2016, Mohler argued that support for Donald Trump was “the Great Evangelical Embarrassment,” stating: “How could ‘family values voters’ support a man who had, among other things, stated openly that no man’s wife was safe with him in the room?”

Yet, in 2020, Mohler changed his position and announced he’d vote for Trump. He also stated he’d exclusively vote for Republican presidential candidates from now on.

“In retrospect, I made my vote of minimal importance,” Mohler said. “I don’t intend to do that in 2020. There’s a bit of regret in that.”

Mohler ended his message Thursday by stating that Americans will know “greater joy” when they have “righteous laws.” This, he said, depends on voters voting the correct way.

“We need the right voters showing up with the right convictions at the right time to vote the right way, in order that our children and our children’s children may inherit this grand constitutional experiment, which I believe under the providence of God is unprecedented in human history,” Mohler said.

When Donald Trump launched his 2020 reelection bid in Orlando, Florida, three years ago, the event was riddled with faith-speak. Both Trump and then-Vice 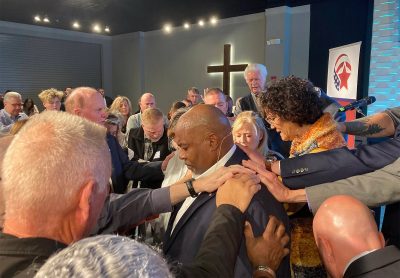 North Carolina Lt. Gov. Mark Robinson has a message for the state’s evangelical pastors: Run for office. Robinson has repeated his message