Allegations of sexual abuse by Cavey were recently confirmed by multiple independent investigations commissioned by The Meeting House.

During a town hall with The Meeting House congregation on August 14 , board of overseers co-chair Bruce Miller discussed the investigations’ findings. He also recounted a recent conversation with Cavey.

“I want you to hang onto this hope that when you get through all of this,” Miller stated, “God has a plan for you, Bruxy—to take all that you have learned through this experience and be able to minister in a very powerful way to other church leaders because of what you’ve gone through. God is not finished with you.”

Miller then recounted telling Cavey to read Psalm 51. “Get down to that middle section where it says, ‘Restore to me the joy of my salvation and then I will begin to minister to others.’ And that’s what we believe we’re aiming for.”

In an email to the congregation, The Meeting Place Board of Overseers asked for forgiveness “for the pain and confusion” caused by Miller’s remarks.

“As Bruce shared about the interaction (with Cavey), he used the word ‘ministry’ in a way that suggested a return to paid or pastoral ministry could be in Bruxy’s future,” the overseers stated. “It was wrong, and was insensitive to those who have been victimized by church leaders and are dealing with significant pain.”

The overseers added that Miller was not speaking on behalf of the overseers when he made his statements, which they said Miller “deeply regrets.” The overseers specifically apologized to victims and to The Meeting House community. “We are sorry and we ask for your forgiveness.”

They added, “Restoration involves full repentance and acknowledgement of sin. In this instance, that includes recognizing what happened as abuse and acknowledging the harm done to others, specifically victims. We have not yet seen Bruxy do this.”

The overseers clarified that they believe it “would not be wise” for Cavey to return to pastoral ministry or “a ministry role at The Meeting House. The breach of sacred trust is too great.”

Despite the controversy, Miller remains in his position as co-chair of the board of overseers, according to The Meeting House website.

Email from The Meeting House Board of Overseers: 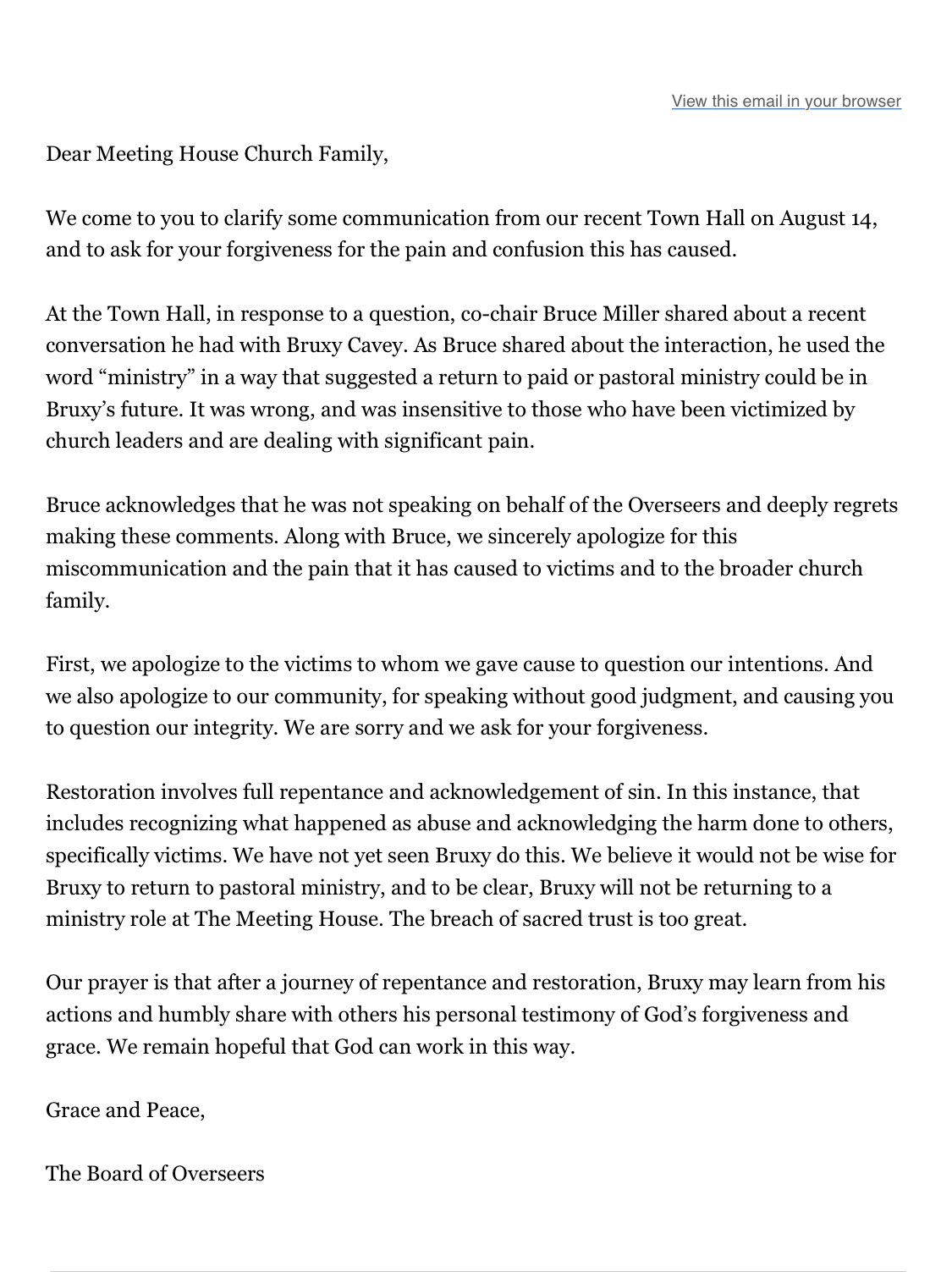