Following exposés revealing that John MacArthur excommunicated a wife for not taking back her child-abusing husband, prominent employees of MacArthur’s broadcast ministry are defending the abuser and dismissing pushback from the survivor community as “screeching.”

Neither MacArthur nor Grace Community Church (GCC) have offered any official response to TRR’s initial exposé two weeks ago, detailing the shaming and ex-communication of Eileen Gray. They also have not responded to TRR’s follow-up story documenting how MacArthur and GCC continued to shun Eileen and promote her husband, David Gray, even after David was convicted of child molestation and abuse.

Butler has defended GCC’s treatment of Eileen Gray and called it biblical. He also has asserted that David Gray is innocent, and that Eileen’s children accused Gray of molesting them only after seeing a therapist and recovering “repressed memories.”

Eileen denies Butler’s assertions, and they are not supported by court documents.

Johnson has referred to Eileen’s excommunication as a “20-year-old discipline case” and says he doubts the “noise about it” is legitimate based on the “screeching tweets from the ‘Survivor’ community.” He later walked back part of his comment.

Johnson, a longtime GCC elder and the executive director of Grace to You, also claims he had “no involvement” in Eileen Gray’s 2002 discipline case and “wasn’t serving as an elder in 2002-05.”

However, records obtained by El Informe Roys show that Johnson was a GCC elder as early as 1994 and including at least some of the years between 2002 and 2005.

Johnson has been an elder at GCC for nearly three decades or more. And according to letters obtained by El Informe Roys, the GCC elders began their involvement in the Grays’ case in July 2001.

That’s when Eileen reported David’s abuse to GCC pastors and submitted to marriage counseling with David under GCC pastor and elder Carey Hardy. It’s also when GCC decided not to renew David Gray’s contract as a teacher at GCC.

Hardy urged Eileen in counseling to submit to David despite his admitted abuse, TRR previamente reportado.

So in November 2001, Eileen asked the elders to remove her from church membership. Hardy refused on behalf of the elders.

Over the next five months, GCC repeatedly urged Eileen to drop a restraining order against David and allow him to return to the family. When Eileen refused, GCC informed her of the elders’ intention to excommunicate her. MacArthur publicly carried out the excommunication on August 18, 2002.

Responding to our initial exposé, Johnson wrote in an email posted online that Eileen’s excommunication was a “20-year-old discipline case that I had no involvement in.”

He added that Eileen’s case “doesn’t pertain to me in any way, though she (Julie Roys) always attaches my name to pretty much everything she does.” Johnson was not named in TRR’s initial or follow-up exposés.

Johnson also wrote that a “friend of mine who is both an elder and an attorney with a special interest in defending real victims is investigating the case. . . . But I’m disinclined to think all the noise about it represents a legitimate desire to know the truth, because of all the screeching tweets from the ‘Survivor’ community calling for a halt to ShepCon (Shepherds’ Conference) while someone gives a speedy answer to a piece written by a career muckraker who has proven to be inaccurate and misinformed in the past.”

Johnson’s comments sparked considerable backlash from abuse survivors on Twitter, who objected to Johnson characterizing their tweets as “screeching” and his use of the term “real victims.” 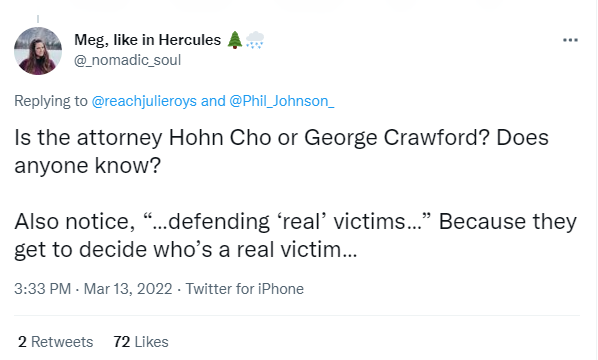 Johnson tweeted a few days later, “I apologize for the use of the word ‘screeching.’ It’s prejudicial to apply that adjective to written objurgations.”

He also again denied any involvement in the Grays’ case. “I wasn’t serving as an elder in 2002-05,” he tweeted. “I have no firsthand knowledge of this case & I’m not the right person to nag for answers. . . .”

4) I do indeed believe that Ms. Roys has shown herself (repeatedly) to be a shoddy ink-slinger with a personal agenda against JFM.

But I apologize for the use of the word "screeching." It's prejudicial to apply that adjective to written objurgations.

Johnson did not address being an elder in 2001, when GCC elders began addressing David’s abuse. Records obtained by El Informe Roys also show Johnson’s longtime board service, which includes at least part of 2002-2005.

In 1994, the year David Gray was hired as a GCC teacher, Johnson served as a member of GCC’s Elder School Council, according to a yearbook photo obtained by El Informe Roys. Johnson did not respond when asked about his role on the council.

TY for clarifying. Would you explain your role as a member of the Elder School Council in 1994, the year Gray was hired? Had you stopped serving in this role by 2001 when GCC didn't renew Gray's contract? 1/2 pic.twitter.com/R8SacAYBA8

Johnson also is named as an elder in 1999 y 2000 on the Spurgeon Archives, a subpage of GCC’s website. In 2000, El cristianismo hoy also cited Johnson as “an elder at Grace Community.”

Johnson did not respond when asked directly if the 2004 list was accurate.

However, after being confronted with numerous pieces of evidence on Twitter, Johnson tweeted, “GCC elders can take a year or more on inactive status for various reasons. I’ve done it twice. Hence I was not involved in this case.”

Johnson also said that he “might have been” present when Eileen Gray was publicly shamed in August 2002.

“We have discipline issues to deal with in about a third of our communion services,” Johnson tweeted. “I don’t remember or record each one.”

Might have been. We have discipline issues to deal with in about a third of our communion services. I don’t remember or record each one.

GCC elders can take a year or more on inactive status for various reasons. I’ve done it twice. Hence I was not involved in this case.

Another Grace to You employee and GCC member, Fred Butler, has also commented online about TRR’s stories involving GCC’s and MacArthur’s treatment of Eileen Gray.

Butler, whom former GTY Managing Director Travis Allen once called “one of the strongest theological minds I know,” argues that GCC handled the Grays’ case biblically.

Butler stated in a tweet that David Gray was “confronted over his sin . . . repented of his behavior . . . wanted to reconcile w/ his family and be counseled/discipled . . . the wife refused to take him back, which is an unbiblical reason for her wanting to leave the marriage. She was held accountable for that.”

– The man was confronted over his sin.
– He repented of his behavior.
– He wanted to reconcile w/ his family and be counseled/ discipled.
– The wife refused to take him back, which is an unbiblical reason for her wanting to leave the marriage. She was held accountable to that.

However, Eileen says David was not repentant before or after her excommunication. She says David stalked her and repeatedly made death threats against her and her children. Two of Eileen’s neighbors corroborated her accounts.

Butler further claims that the Grays’ children accused David Gray of sex abuse “AFTER the mother took the kids to a therapist who ‘recovered’ their suppressed memories.” He adds, “Suppressed memories is (sic) as reliable as spectral evidence” (evidence of ghosts).

But he did. He was repentant and wanted to reconcile w/ his wife. All of the sex abuse allegations came a year & half later AFTER the mother took the kids to a therapist who "recovered" their suppressed memories. Suppressed memories is as reliable as spectral evidence.

However, according to Eileen and court documents, Butler’s claims are false. Eileen says the first report of sexual abuse by one of her children came spontaneously in May 2003.

After crying for hours while other children played outside, one of Eileen’s children told her that David had molested the child, Eileen stated in her 2005 court testimony. The child also drew a picture of the abuse, which was entered as an exhibit in the 2005 trial.

The next day, the same child revealed more details of the abuse, Eileen testified.

Eileen then contacted her attorney, who filed motions to temporarily stop David’s monitored visitations so a court-ordered professional could evaluate the validity of the child’s accusations.

A licensed clinical social worker then conducted a court-ordered investigation and determined the allegations were credible, Eileen said. She added that in the social worker’s final report, the evaluator stated that David profiled as a pedophile.

Within a week of the evaluation, one of Eileen’s other children told Eileen that David had molested that child too, Eileen testified.

El Informe Roys reached out to Fred Butler on Twitter, asking where he got his information and requesting to speak with him. So far, Butler has not responded.

El Informe Roys has also reached out repeatedly to John MacArthur, Phil Johnson, and other pastors at GCC for comment on GCC’s treatment of Eileen Gray. No one has responded.