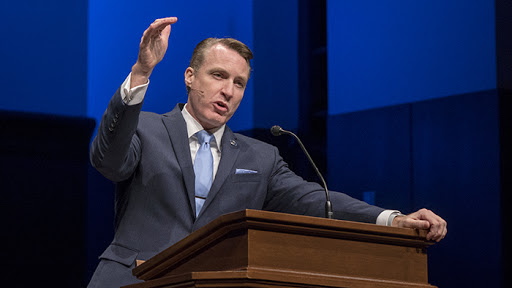 The father of a former Cedarville student said he felt misled by Cedarville President Dr. Thomas White when the father inquired more than two years ago about Dr. Anthony Moore–a professor fired last week for prior sexual misconduct.

The father said he called White, whom he knew personally, shortly after his son told him in late 2017/early 2018 that Moore had suggested that Moore and the man’s son go hunting sometime.

When I interviewed White last week, he confirmed that Moore had suggested going hunting with a student, and mentioned both the name of the student involved and the student’s father. White said that after the father called him, he told Moore that he thought the hunting suggestion was “inappropriate” and told Moore he “could not do that again.”

White also confirmed that he knew many details of Moore’s background before hiring Moore in 2017. This included information that Moore had admitted that he secretly recorded multiple videos of another man showering while Moore was a campus pastor at The Village Church in Fort Worth, Texas.

The father, who did not want his name or his son’s name published, said White didn’t tell him anything about Moore recording videos when the two talked in late 2017/early 2018. Instead, the father said White characterized Moore’s sin as a “technologically related” moral failure.

The man’s son said he met Moore through his roommates at Cedarville in 2017, or maybe early 2018, and the two started to develop a friendship.

The son said he mentioned the invitation by Moore to his father during a phone call. The father added that when his son came home for the weekend, his son again mentioned Moore and that he was excited about this new relationship.

However, Moore’s name raised red flags for the father, who said he had heard that Moore had been fired from The Village Church but didn’t know why.

The Village Church fired Moore in January 2017 for “grievous immoral actions against another adult member,” but didn’t give any details.

The father said the pastor urged him to call Dr. White, which he did.

The father said he knew White and had his cell number, so he called White to ask about Moore.

The father said White told him that Moore had a “technologically related” moral failure that involved another man, but Moore didn’t act on it.

“My first thought was, okay, he probably sent some inappropriate texts or an inappropriate picture to another guy,” the father said. “And when (White) said (Moore) didn’t act on it, I just assumed he meant they didn’t end up in some . . . sort of physical relationship.”

The father said he urged his son to “steer clear” of Moore, which his son did. But the father said now that he knows Moore secretly recorded videos of another man showering, he feels misled.

“That isn’t even close to what I would have thought somebody meant by an immoral, technology related act,” he said. “That’s not what my mind goes to, even though I’ve been around the block a time or two with all sorts of crazy things in ministry.”

The father added that when he listened to a podcast I published with Dr. Diane Langberg, he was especially concerned.

“The predatory language that we’ve talked about over the most recent years has to do with adults and children,” he said. “But yesterday, listening to that interview talking about how adults, how they can be predatory with other adults and how that works—that interview yesterday sort of opened my eyes to some things that added to my concerns.”

I reached out to Dr. White for comment after interviewing the father and son, but he did not respond.

Currently, there’s a petition with more than 1,000 signatures, calling on Cedarville to fire White. When I asked both the father and son what they think the school should do, they both said they trust the trustees to handle the situation properly.

Update: I changed the word “confirmed” to “mentioned” in the following sentence, which more accurately reflects what happened: “When I interviewed White last week, he confirmed that Moore had suggested going hunting with a student, and mentioned both the name of the student involved and the student’s father.”