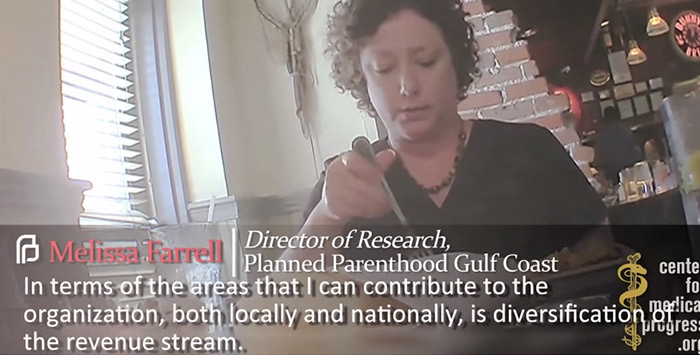 A fifth video released today by The Center for Medical Progress gives additional evidence that Planned Parenthood is harvesting “intact fetal cadavers” for sale to medical laboratories and that it alters procedures to do so. This raises the unsettling possibility that Planned Parenthood is delivering live babies and then killing them in violation of the Born Alive Infant Protection Act. It also suggests that the abortion provider is violating federal law, which requires that no alteration be done in the timing or method of abortion for the purposes of fetal tissue collection.

“If we alter our process, and we are able to obtain intact fetal cadavers,” says Melissa Farrell, Director of Research for Planned Parenthood Gulf Coast, “we can make it part of the budget that any dissections are this, and splitting the specimens into different shipments is this. It’s all just a matter of line items.”

“Planned Parenthood’s system-wide conspiracy to evade the law and make money off of aborted fetal tissue is now undeniable” — David Daleiden, The Center for Medical Progress

Farrell is the focus of the latest undercover video, which also features two actors posing as buyers for a medical research laboratory. The video comes a day after the U.S. Senate failed to pass a bill that would have eliminated Planned Parenthood’s more than $500 million in federal funding.

When the buyers ask if Farrell can deliver higher volumes of certain intact body parts, Farrell reiterates her clinics’ willingness to change abortion procedures.  “It’s something that we can look at exploring how we can make that happen,” she says, “so we have a higher chance. . . Some of our doctors in the past, have projects and they’re collecting specimens, so they do it in a way that they get the best specimens, so I know it can happen.”

The video also provides more evidence that Planned Parenthood is not merely donating fetal tissue, but selling it for profit, which is also illegal. At one point, the undercover buyers suggest paying Farrell more for extracting intact body parts since it would require more difficult procedures. She replies, “Obviously, the procedure itself is more complicated . . . Sometimes the procedures are longer, so then anything that we piggyback on to that for collection purposes obviously, would have to reflect that additional time, cost, administrative burden.”

Farrell also tells the investigators that harvesting and selling baby body parts contribute significantly to the finances of Planned Parenthood Gulf Coast: “I think everyone realizes, especially because my department contributes so much to the bottom line of our organization here, you know we’re one of the largest affiliates, our Research Department is the largest in the United States. Larger than any the other affiliates’ combined.”

“This is now the fifth member of Planned Parenthood leadership discussing payments for aborted baby parts without any connection to actual costs of so-called tissue ‘donation,’” said David Daleiden of The Center for Medical Progress.  “Planned Parenthood’s system-wide conspiracy to evade the law and make money off of aborted fetal tissue is now undeniable.”

The most gruesome part of this latest video occurs near the end where Farrell takes investigators into the pathology laboratory at Planned Parenthood.  There, the buyers ask to see the remains of the day’s abortions. At first, the staff member laughs and replies, “We had a really long day and they’re all mixed up together in a bag.” But then, someone reminds them about the last abortion they did. “Oh, at 20 weeks,” the staff member remarks. “It was a twin!”

Then, she pulls the remains out of the freezer and begins to pick through it to give the buyers an idea of what the clinic is able to harvest. She identifies lungs, intestines, and other organs. “Like I said, the organs come out really well.” At one point, she picks up what is clearly an arm with a fully-formed hand attached to it. When the buyers ask how many second trimester abortions the clinic does each month, she responds, “Forty to fifty, easy.”

According to Daleien, the CMP has as a total of a dozen undercover videos it intends to release. Some of those videos involving StemExpress, a company that buys fetal tissue from Planned Parenthood, cannot be released due to a temporary restraining order by a California Court.