Stovall Weems—the founder of a Florida-based megachurch formerly linked with the Association of Related Churches (ARC)—committed fraud and “unjustly” enriched himself with church funds, according to the findings of an independent investigation.

“Stovall Weems violated the law by breaching his fiduciary duties to Celebration, committing fraud, unjustly enriching himself at the expense of the Church, and failing to meet the fiduciary duties and standards of care required by his office,” the report published by Celebration Church states. “He has brought Celebration to the brink of insolvency.”

Weems and his wife, Kerri Weems, who both served on ARC’s Lead Team for many years, resigned from Celebration Church earlier this month amid a legal battle with the church.

ARC is one of the largest church planting organizations in North America and has been embroiled in multiple scandals. Celebration is a multi-site megachurch with locations in South Florida, North Carolina, Washington, D.C., and around the world.

On Monday, Celebration’s trustees released a report of the investigation’s findings and recommendations.

The Weemses are responsible for nearly $3.4 million missing from church accounts, according to the report, plus some $430,000 in “embezzled profit” from the unauthorized purchase of a church parsonage.

“But for the steadying leadership of Pastor Tim Timberlake and the actions of Celebration’s Board, Celebration would have likely already failed as an institution,” the report states.

The report also alleges the Weemses have led the church in “inconsistent and unbiblical” ways for years, including “rampant spiritual and emotional abuse.”

The Weemses did not immediately respond when The Roys Report reached out for comment. In a statement to News4JAX, Stovall Weems called the report “completely concocted” and “a character assassination without real basis.” He also said he requested “the usual independent financial audit” but the board hadn’t done one.

Lee Wedekind III, one of the report’s authors, said he didn’t agree with Stovall Weems’s characterization.

“We’re confident that the report speaks for itself and that ultimately truth will be brought to life,” Wedekind said.

Wedekind and another attorney with Nelson Mullins conducted the investigation “according to biblical principles,” the report stated. They reviewed thousands of pages of documents and held more than 20 interviews during the investigation.

The report states the Weemses refused to be interviewed and did not cooperate with the investigation.

The law firm found that Stovall Weems benefited from “a series of improper and unauthorized financial transactions” at the church’s expense. Then, when trustees questioned those transactions, Weems tried to kick them off the board, according to the report.

Trustees suspended Stovall Weems in January and launched the investigation, The Roys Report previously reported. The Weemses then filed a civil lawsuit against Celebration Church in February, alleging the church retaliated against them for reporting financial misconduct.

Much of the report covers the details of the financial mismanagement for which trustees say the Weemses are responsible. But it also paints a stark picture of dysfunctional and toxic leadership.

The law firm found that Stovall Weems had created “a culture of confusion and disarray that has hindered the Church from effectively carrying out its mission.”

“Worse, Weems’ leadership was marked by rampant spiritual and emotional abuse, including manipulation, a profound sense of self-importance and selfishness, superiority and entitlement, overbearing and unreasonable demands on employees’ time, a lack of accountability or humility, demands of absolute loyalty and compliance, public shaming and humiliation of employees, coercion, shunning, gaslighting, and the creation of a culture of fear and intimidation in which it was not safe to disagree with Weems,” the report went on to state.

Nearly everyone interviewed called Stovall Weems a narcissist, according to the report.

“Many witnesses detailed, often through tears, instances when (Stovall) Weems personally belittled and humiliated them for minor mistakes” or for misunderstanding his confusing instructions, the report states. It adds that the Weemses also “demanded others to serve them – the antithesis of Christ-like personal sacrifice and service to others.”

The report describes how the couple exhibited “the Weemses’ immense entitlement and self-importance” and states it took about 10% of the church’s revenues to pay for the Weemses’ lifestyle and staff.

The report recounts how Stovall Weems claimed to have seen Jesus on stage during a church service in 2018 and used “the Encounter” to “justify his authority and maintain control” at Celebration Church.

A sketchy reorganization and questionable transactions

Weems reportedly proposed a vast restructuring, spinning off church ministries into discrete for-profit entities in September 2020, in the middle of the COVID-19 pandemic.

The church had three CFOs in six months, in part due to the Weemses’ treatment of staff, according to the report. During that time, Stovall Weems failed to call a board meeting.

“Uncoincidentally, it was during this period when all of the improper financial transactions occurred,” the report stated. “Weems eliminated or ignored all oversight, accountability, and compliance mechanisms that acted to limit his discretion and acted unilaterally.”

The improper transactions detailed in the report included:

The church’s next steps

State business filings still list the Weemses as directors or managers for Honey Lake Farms and Northstream Management Group, an entity created to manage the organizations that were spun off from Celebration Church.

Stovall is listed as president of Habitat for Wholeness, a church-related nonprofit vaguely described as “connecting people and resources to identified needs in communities across the world.” (Stovall Weems is listed in a March filing as a director of AWKNG, too, but Wedekind said he isn’t a director anymore.)

The Weemses are also the sole officers for Celebration Global Inc., headquartered at the church parsonage; and Stovall Weems is one of the officers for Honey Lake Resort LLC, also linked to Celebration Church. The report doesn’t mention those entities.

The report also recommended that the church sell the parsonage. Wedekind said the Weemses are still living there, but Celebration Church had told them to vacate the property by May 30. The couple has not acknowledged the deadline, Wedekind said.

It also advised that the church should make the Weemses give back “all funds misappropriated by them;” and make Honey Lake Farms, AWKNG, Northstream Management and Habitat for Wholeness repay loans from the church that the Weemses forgave. It recommended that Celebration Church bring in law enforcement to find out if criminal charges are warranted, and start the conciliation process outlined in the church bylaws.

The board approved all the recommended steps on April 24, according to a statement that accompanied the report’s release.

The report states “the Weemses are completely unrepentant.”

“Through their actions, Stovall and Kerri Weems have disqualified themselves from pastoral leadership,” the report concludes.

Stovall and Kerri Weems Settle With Bank Over $700K in Defaulted Loans, But More Lawsuits Loom

Former Celebration Church Pastor Stovall Weems and his wife, Kerri, have settled with First Citizens Bank after a claim stating they defaulted 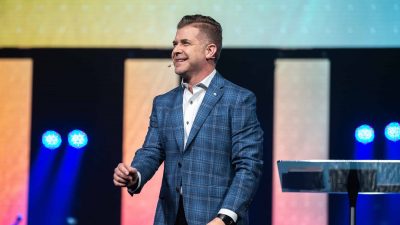 A year after former megachurch pastor Jeremy Foster resigned over an adulterous affair, he has remarried with the blessing of his father,