I recently read this insightful article by Wade Mullen, the director of the M.Div. program at Capital Seminary & Graduate School, and was so taken with it, I asked Mullen’s permission to reprint here. Thankfully, he consented. Mullen is a former pastor with a doctorate in leadership and clearly is skilled in detecting spiritual abuse and training others to do the same.

“I urge you, brothers, to watch out for those who create divisions and obstacles that are contrary to the teaching you have learned. Turn away from them. For such people are not serving our Lord Christ, but their own appetites. By smooth talk and flattery they deceive the hearts of the naive.” (Rom. 16:17-18)

I have been closely following the news about James MacDonald and Harvest Bible Chapel since World Magazine published an article in December about alleged “financial mismanagement,” “deception,” and “intimidation.” I read the statement HBC released shortly after and was immediately concerned by what I saw in that statement. Here is what I observed in their first 153 words.

It is a sad day when once-credible Christian publications consider the opinions of a few disgruntled former members, already rehashed ad nauseam, of greater weight than the carefully expressed viewpoint of a plurality of local church Elders.

Even though the story was about specific wrongs done to others, they brought attention to their own pain and how “sad” it was they were being exposed. This tactic is called supplication and is meant to cause others to grant them the compassion and support people would normally give to the wronged.

They then used a tactic I call “tarnishing.” Just as your shoes might affect your overall appearance if they are tarnished, they sought to increase public condemnation of the whistleblowers by suggesting they lacked credibility, were motivated by malice, and were alone in their concerns.

The former members and journalist were further tarnished by the suggestion that their concerns had been “rehashed ad nauseam” — brought up repeatedly to the point that they had become irritating and unproductive. People were then led to see them as disgruntled former members who couldn’t move on.

They used a tactic I call “polishing.” Just as your shoes improve your overall appearance when polished, the organization sought to improve public approval of their leadership by suggesting they were credible, careful, and greater in number.

By stating the behavior was addressed by others who continued to support James MacDonald, and later even signed their unconditional support, they used them as a witness to his legitimacy. Members were then forced into rejecting the polished credibility of all their leaders if they were to accept the tarnished credibility of the whistleblowers.

Harvest Bible Chapel has owned its mistakes and endured to become a happier and healthier church, whose members recently pledged — financially, in their walk/work for Christ, and in their promise to share Christ with others — at unprecedented levels.

They then claimed to have “owned” their “mistakes.” Hidden underneath labels like “mistakes” is a desire to escape penalty in which the harm done to others is acknowledged but the need for any significant consequences is denied. It’s a form of excuse called “denial of intention” that says, “This was accidental behavior that caused unintentional harm and is unlikely to happen again. Had we known of the harm, we would have made a different decision.” People tend to excuse honest mistakes.

These events are then described as something the leadership had to “endure,” revealing a perspective that sees one’s self as the primary object of harm. It is another type of excuse that denies responsibility by giving others the impression events were outside of their control. We “endure” harm that happens to us and is unmanageable. We change behavior that is causing harm and within our control.

The claim is then made that the product of their endurance is a “happier and healthier church.” People are asked to believe that the behaviors from the past are no longer in the present. Not only that, people are asked to credit them for their endurance in the face of challenges which produced greater happiness and health. People are made to see the mistakes of its leaders in a positive light and even be thankful for them.

Just as the elders were used as witnesses of James’ qualification to lead, the members were then used as witnesses of the church’s happiness and health. These members were exemplified — “happier and healthier than ever before.” Now any who sided with the credibility of the whistleblowers also had to side against the credibility of the members. Members were also reminded of their “pledge” and their “promise” as a way to exploit their loyalty to the organization.

They then entered into what I think is the very heart of spiritual abuse with this statement:

The anticipated attack that comes with God’s kingdom moving forward has come, sadly, not from those in the world but from other professing Christians.

This also provides people the justification they need to be saddened and upset, not over the church’s actions, but over the actions of the whistleblowers who were launching an attack against God’s kingdom. They were then asked to expect this kind of attack from the “world” but not from true Christians, bringing into question the spiritual state of the whistleblowers.

It can be hard for those who receive these messages to side against the church when such lies are planted in their minds.

We have chosen the high road and refused to engage in public assault on people we once served closely with who just can’t seem to “let it go,” even after all these years. The Elders are privy to many grace-filled private attempts to reconcile, extended in hopes that these unhappy Christians would find peace.

Having tarnished the credibility and motives of the magazine, the journalist, and former employees; having pitted them against God Himself; and having aligned them with the non-believing world, the church then argued to have “chosen the high road.” This is the heart of hypocrisy: claiming to be righteous while holding a rod of oppression.

It was the whistleblowers who took the difficult high road of truth-telling in the face of those who had taken the easy low road of truth-repelling. Harvest attempted to turn that landscape upside-down.

This rotating of the map gave others the impression that the organization was taking the difficult high road of pursuing peace, inviting reconciliation, maintaining confidentiality, letting go of the past, demonstrating love, and promoting unity; while also giving the impression that those speaking out had taken the easy low road of pursuing revenge, rejecting reconciliation, spreading gossip, harboring bitterness, demonstrating hate, and promoting division.

They went on to claim the former members were engaging in a public assault, which they viewed as a betrayal of the close relationship they once had. This indirectly put the blame for any relational losses on the shoulders of the former members, and and also painted them as those who would betray loyalties and friendships.

They never refuted the substance of the concerns raised by the former members or journalist, only their right to raise the concerns, concerns which they suggested no longer had relevance since they were handled “so long ago.” I call this tactic “distancing.” Knowing people tend to care more about recent and current wrongs, the organization gave the impression that the concerns were in the distant past. This also fit their narrative of becoming a happier and healthier church.

Even though claims made by the whistleblowers were backed up with detailed evidence, claims made by the leadership amounted to saying “just trust us.” They repeatedly defined the situation for others through ambiguous statements knowing the details had the power to disrupt that definition. This explains why they acted swiftly to bury those details once they began to emerge.

Drawing attention to their “many grace-filled private attempts to reconcile” also gave people the impression the church was in the right, willing to extend grace to those who were in the wrong, patient, committed to protecting another’s privacy, and desirous of reconciliation. This indirectly presented an alternative impression of the whistleblowers of being in the wrong, unwilling to receive or extend grace, impatient, unwilling to maintain privacy, and rejecting of reconciliation.

All of these deceptions and dynamics of spiritual abuse are contained in a mere 153 words. This is extremely concerning when you consider the thousands of people who sit under an organization that exists largely because of its communication. It is no wonder that many who have left describe a systemic culture of spiritual abuse.

These statements are indicative of an organization governed by deception.

I have been troubled by Christianity Today’s publishing of James MacDonald’s op-ed in which he defended the church’s decision to sue the former elders wives, the former elders, and the journalist. It is not unusual for exposed and threatened powerful leaders to turn to outside friendly systems for support and help. I am not exactly sure who James turned to at Christianity Today, but the editor in chief, Mark Galli, acknowledged making the final call to publish the piece despite debate from within his staff (which is a concern in and of itself.)

Christianity Today’s primary defense strategy for why it published the piece is a type of justification in which a party acknowledges the concerns, concedes the basic facts about the decision, but argues the decision was just by appealing to historical and industry practices. Their specific appeal was to a past decision to allow Andy Stanley the space to defend his views on the authority of the Old Testament.

This is not a valid justification. James MacDonald was not simply defending a controversial view on lawsuits. He was defending the harmful action of suing innocent people; an action that I believe was meant to intimidate and threaten. Christianity Today empowered that action when they chose to give James MacDonald a platform. They should have listened to the wisdom of those on their staff who disagreed with the decision. I suggest they retract that article and publicly apologize for publishing it.

Below is the full statement Harvest posted on December 13, 2018, but has since removed from its website: 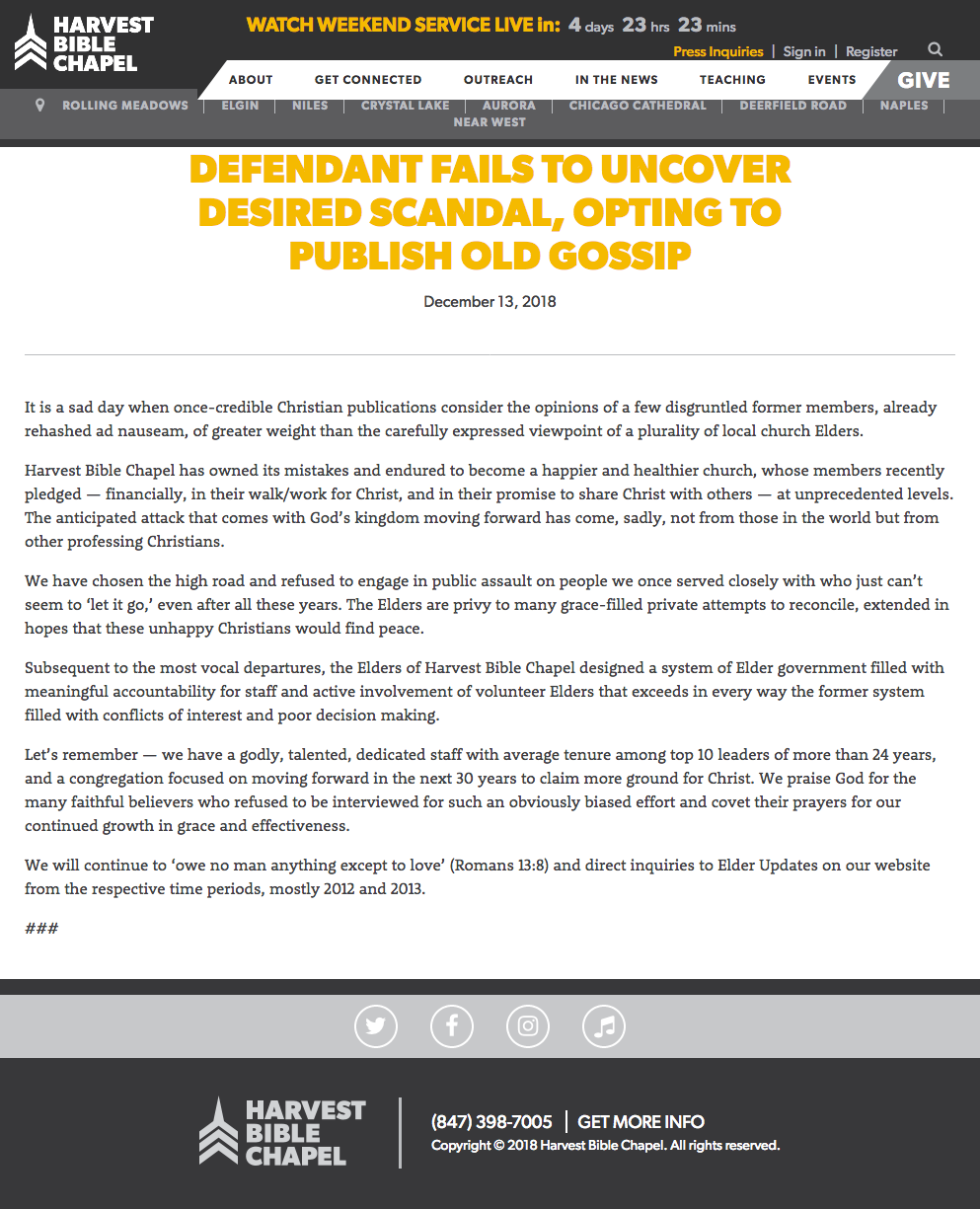