Harvest Bible Chapel today announced it is shutting down Walk in the Word—the Bible teaching broadcast ministry of recently-fired Harvest founder, James MacDonald. In an email sent to supporters Thursday evening, Harvest said it is taking down the Walk in the Word website “until further notice.” (At publish time of this article, the website was still active. UPDATE: The homepage for the Walk in the Word website is still available. But now, when you click on any of the tabs, a page saying, “Website Under Maintenance” appears.)

The church also said it had cancelled the planned launch of  Walk in the Word digital content, and had stopped taking donations on March 1.

Walk in the Word launched more than 21 years ago on WYLL, a local AM station in Chicago. In 2000, the Bible teaching program was added to the Moody Radio Network. And by 2018, Walk in the Word was heard on more than 2,000 radio and TV outlets, including the Trinity Broadcasting Network.

In January, after published reports alleging abusive behavior, deception, and financial misconduct by James MacDonald, MacDonald announced he was pulling Walk in the Word from radio and TV stations and focusing exclusively on digital delivery of the program. At the time, MacDonald admitted the controversy was “straining relationships” with Christian broadcast ministries.

On February 12, Harvest fired MacDonald after vulgar comments by MacDonald were aired on a Chicago-area radio station.

Below is the email Harvest sent to supporters: 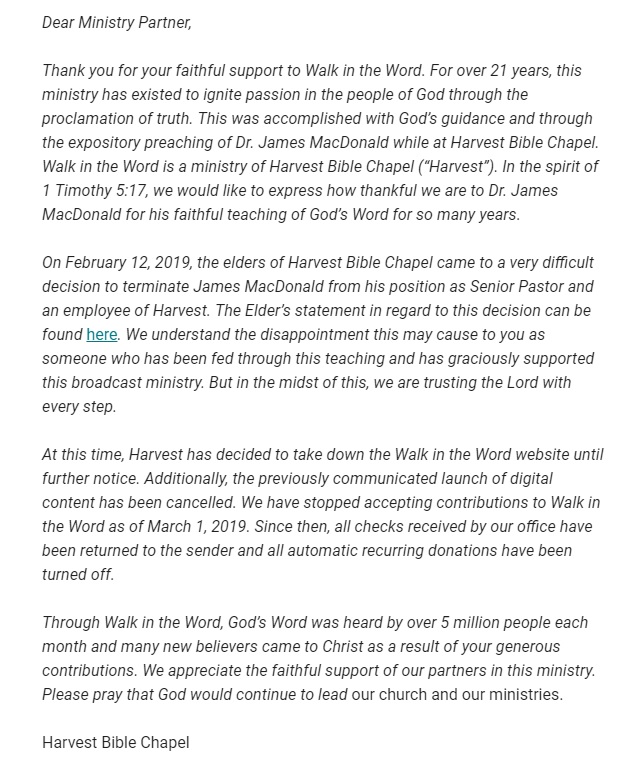