What do you do when you’re caught red-handed in a public sin?

If we follow the example of King David, we own it and say, “I have sinned against the Lord,” and accept the consequences. But too often, those caught in sin cover. They manipulate. And they deceive—even within the Christian community.

People caught in sin resort to these tactics so much that Dr. Wade Mullen, who heads the MDiv program at Capital Seminary, made the study of the tactics evangelical organizations use when facing scandals the focus of his doctoral dissertation.

Dr. Mullen joined me last week on my radio program, The Roys Report. And he explained in detail these tactics, which often involve spiritual abuse. Mullen described spiritual abuse as “an attempt by a person to use all that encompasses another person’s spiritual life—their beliefs, their faith, their experiences, their hopes” to coerce or manipulate that other person into “serving the abuser’s agenda.”

Yet Mullen said these tactics are often quite stealth and hard for those being manipulated to detect. So rather than explain these tactics in abstract terms, I asked Mullen to comment on a convocation at Liberty University, where I suspected these tactics were being used.

Prior to the convocation, Freeze—an outspoken Christian—had said nothing publicly about the scandal that had led him to resign. Just last week, I published a story showing that even now, Freeze is telling a version of his story that doesn’t match the facts.

But at the convocation in January 2018, about six months after his resignation, Freeze got up in front of 13,000 students at Liberty University and vaguely apologized to them for something he had done while at Ole Miss, some 700 miles away.

At the time of the event, this must have seemed a bit odd and unrelated to anything at Liberty. However, 11 months later—at about the earliest time Freeze could be hired and avoid a NCAA suspension—Liberty hired Freeze as its new football coach.

Ostensibly Freeze came to the convocation in 2018 so he could “tell the faith family I am sorry.” Yet Mullen said the convocation was more likely a “team performance” aimed at earning the endorsement of the student body so Liberty could hire Freeze as its next head coach.

After the program aired, Scott Lamb, Liberty Senior VP of communications, disputed this interpretation. He said that at the time of the convocation, Liberty didn’t know that its former coach, Turner Gill, was going to retire in 11 months. Lamb added that Liberty President Jerry Falwell Jr. had offered Gill a multi-year contract extension, but Gill turned it down.

However, when Gill announced his retirement on Dec. 3, 2018, Liberty said it would conduct a “national search” for his replacement. A mere four days later, Liberty hired Freeze, making it appear that Freeze had been waiting in the wings all along.

In addition to these “macro-level” tactics, Mullen said Liberty also employed several “micro-level” tactics like “exemplification” and “polishing.” Mullen said those on the receiving end, like the students, often don’t grasp the truth behind the scandal being covered up or whitewashed, because the abusive people are defining everything for them.

Define the Situation and Manage Perceptions

Early in Freeze’s 20-minute message to the students, he references a “private sin,” which he claims was in his “rear view mirror” before it became public in July 2017. He then claims that his faith is real despite a “season” of struggling with sin because Scripture says “every single one of us are (sic) broken.”

Freeze’s narrative was also reiterated after Freeze’s talk by Liberty VP of Spiritual Development, David Nasser. Nassar told the students that shortly before the convocation, he met Freeze’s “accountability partner.” This man reportedly told Nassar that Freeze had confessed his sin to him and another friend, as well as Freeze’s wife, a year before it became public.

Reiterating Freeze’s words, Nassar said Freeze’s sin, which Nassar had earlier called a “mistake,” was in Freeze’s “rear view mirror” and “there was a great victory.”

Mullen said those on the receiving end, like the students, often don’t grasp the truth behind the scandal being covered up or whitewashed, because the abusive people are defining everything for them.

However, these accounts are missing a major detail. According to Sports Illustrated, Freeze called a massage company just seven months before his calls to sex-related businesses became public. So apparently, Freeze’s “sin” didn’t end after his alleged confession and the situation was hardly a “great victory.”

Mullen said the narrative Freeze and Nassar offered is a prime example of how an institution defines a scandal for its audience and tries to “blur the reality” of what happened by omitting details. Freeze and Nassar also used excuses to manage the opinions of the students and were “strategically ambiguous,” Mullen said, referring to Freeze’s pattern of patronizing sex-related business as a “mistake” or “a private sin,” rather than specifically naming what he did.

Hear the relevant excerpt from Freeze’s message and Mullen’s explanation:

After vaguely referring to this “private sin,” Freeze then talks about love and asks the students at Liberty to forgive him. They respond, saying, “We forgive you!”

This is an example of what Mullen calls claiming the “forgiveness credit.” It’s when a person trying to manage a scandal asks (or sometimes demands) forgiveness without having actually named his sin.

Mullen said the offender often claims, “Forgiveness has been credited to me from God. Therefore, you ought to accept that, as well.” Mullen said the “forgiveness credit” is a powerful tactic because people often miss the fact that the wrong has not yet been defined. “The truth has not yet been revealed and confessed and discovered,” he said. “And many times, forgiveness is being used to prevent that discovery of truth.”

Even so, Mullen said Christians often accept the leader’s vague apology. And once this happens, they’re stuck. If someone brings up the offense, the person who’s committed it simply claims the “forgiveness credit” and urges everybody to move on.

According to Mullen, the final step in securing people’s support after a scandal is getting endorsements. This is when the organization brings in several, respected people to vouch for the person caught in a scandal to reassure their audience that the person is either innocent or reformed.

At Liberty’s convocation, several people functioned as endorsers. One was Freeze’s wife, Jill Freeze, whom Nassar interviewed after Hugh Freeze’s message. Jill Freeze called her husband the “godliest man I have ever known.” And she said God helped her focus on her own “bad traits” in the wake of revelations about her husband’s “bad traits” (i.e. repeated infidelity).

Another “endorser” who came to Liberty for the convocation was Freeze’s pastor, Hugh Henderson. Henderson leads a multi-site megachurch in Mississippi called Pinelake Church and vouched for the authenticity of Hugh and Jill Freeze’s faith. “I’ve watched (Hugh and Jill Freeze’s) faith journey,” Henderson said. “And they are real and true in their faith.”

But perhaps the strongest endorser for Freeze was someone from the student’s own community—David Nassar.

When Nasser introduced Hugh Freeze, he called him “one of the great offensive minds of the game.” Nassar added that he’s been “so impressed” with Jill and Hugh Freeze’s “love for the Lord” and their passion “to see God glorified.”

According to Mullen, Nassar calling Freeze one of the greatest offensive minds of the game was what researchers call “exemplification”—an attempt to establish someone as an “exemplar,” or ideal model.

Mullen said Nassar then engaged in so-called “polishing”—highlighting the positive attributes of Freeze to strengthen his endorsement. “(Nassar) is saying, ‘You know, I’ve gotten to know this guy. We’ve had a couple meals together. And so, I can vouch for his commitment to the Lord, the strength of his faith,’” Mullen said.

Below is audio of Nassar’s statement and Mullen’s explanation:

At the end of the convocation, Liberty President Jerry Falwell Jr. completed what Mullen called the “set-up.”

Falwell expresses how proud he is of the Liberty students for saying they forgive Freeze. Then he contrasts the forgiving students with the “so-called Christians” who “read Twitter comments” and are “the most judgmental, unforgiving group of people in the world.”

Falwell says these people are like the “generation of vipers” and religious hypocrites who wanted to stone the woman caught in adultery.

Here, Falwell really isn’t addressing people outside the Liberty community, Mullen said. Falwell is talking to the students because they are the ones whose endorsement of Freeze Falwell seeks.

“He’s really now putting the students into one of two camps,” Mullen said. “There’s no middle ground. There’s no room for critical thinking, even—ironically—in a place of higher learning . . .

“You must either forgive and extend love and grace—and if you do, then . . . you are like Jesus—and if you don’t you are like the religious leaders who wanted to pick up a stone and kill the woman who was caught in adultery. . . . What do you do if you have a problem with this? . . . You can’t say anything. It’s a setup.”

Mullen said people entrapped in this way need to combat the manipulative tactics with truth. They need to go back to the definition that’s been offered concerning the scandal and see if it matches the details. “And when you look at the details, the details often disrupt that definition. . . . (O)ften we miss some of that because the abusive people are defining everything for us.”

Hear Falwell’s comments and Mullen and my conversation about it:

Click here to hear the full audio of the radio program with Wade Mullen or read the transcript.

Below is the video of Liberty’s Convocation with Coach Freeze: 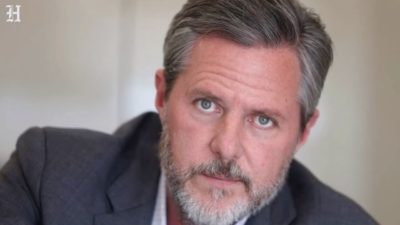 Liberty University has placed Jerry Falwell, Jr., on indefinite leave of absence from his roles as president and chancellor of the university,

Liberty University President Jerry Falwell Jr. is at the center of controversy once again, after posting (and then deleting) a racy picture 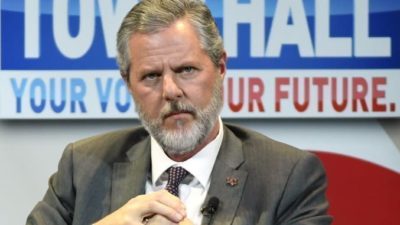 7 thoughts on “Hugh Freeze, Liberty University, and the Anatomy of Spiritual Abuse”