SBC President J.D. Greear: “God did not call Southern Baptists to save America”

Southern Baptist Convention (SBC) President J.D. Greear called out fellow Baptists who he said were sowing dissension and lies in the nation’s largest Protestant denomination at the meeting of the SBC’s Executive Committee on Monday.

Greear,  who pastors The Summit Church, a North Carolina megachurch, defended his three years as the denomination’s president and highlighted the convention’s growing diversity. But he said political divides are distracting the convention from its mission work.

“We are not, at our core, a political activism group,” he said in an address to the denomination’s Executive Committee. “We love our country, but God has not called us to save America — he’s called us to build the church and spread the gospel and that is our primary mission.”

In recent months, Southern Baptist leaders have been embroiled in a debate over Critical Race Theory, an academic framework that seeks to explain systematic racism.  Leaders of the denomination’s seminaries labeled CRT as incompatible with the SBC’s statement of faith.

That led several prominent black Southern Baptist pastors and congregations to announce they were leaving the denomination.

Greear called on his fellow Baptists to focus on the gospel, instead of things that divide them. And the gospel, he said, demands diversity.

“If we are going to be gospel above all people, it means that we will be a church that engages all of the peoples in America, not just one kind,” he said. “And that’s hard. Bringing together people of different backgrounds and cultures and ethnicities into the church creates challenges. Anybody that says it’s not hasn’t actually done it.”

While he said that he agreed with some of the concerns about CRT, he also lamented that criticism of CRT had alienated people of color and pledged to work harder on racial reconciliation.

Some Southern Baptist leaders, including Greear and ethicist Russell Moore, have been accused of leading the denomination in a “liberal direction” because of their openness to addressing issues of race and social justice. Others were criticized for not being supportive enough of Donald Trump.

Greear said that COVID-19 has revealed fault lines in the denomination.

“The last year has revealed areas of weakness in our beloved Convention of churches,” he said. “Fissures and fault lines and fleshly idolatries. COVID didn’t produce these crises, it only exposed them.”

Greear said that Southern Baptists have always come together to send out missionaries and to train leaders. He said the denomination spent years fighting to get its theology right.

But its culture, he said, has failed at times to reflect that theology and was more shaped by Southern or conservative culture than the gospel. That culture has often made life difficult for people of color while allowing racists to be at home.

“We should mourn when closet racists and neo-Confederates feel more at home in our churches than do many of our people of color,” he said. “The reality is that if we in the SBC had shown as much sorrow for the painful legacy that racism and discrimination has left in our country as we have passion to decry CRT, we probably wouldn’t be in this mess.”

As president, J.D. Greear said that he and other leaders have been lied about, called liberal, and accused of trying to destroy the convention.

He then outlined some of his conservative credentials — his church’s commitment to sending missionaries and baptizing new converts, his prayer at the U.S. Senate on the day that Supreme Court Justice Amy Coney Barrett was confirmed, and his belief that homosexuality is sinful.

Greear also joked about rumors that he had received funding from progressive philanthropist George Soros and that he flew around the country in a private plane paid for with Southern Baptist donations.  The SBC president said that he had seen neither a check from Soros nor an SBC-funded plane.

Greear labeled lies about SBC leaders and entities as “demonic” and said that the SBC could no longer tolerate such sinful behavior from critics that he compared to the Pharisees, a religious group that opposed Jesus in the New Testament gospels.

Southern Baptists fought against liberal theology in the past, he said. They should also oppose those who try to divide Baptists with lies.

Those controversies, Greear said, distract from the denomination’s largest mission.

In the end, he said, Southern Baptists had to decide what was more important to them.

“Do we want to be a gospel people, or a Southern culture people? Which is the more important part of our name — Southern or Baptist?” 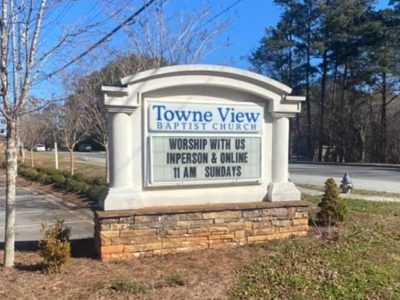 29 thoughts on “SBC President J.D. Greear: “God did not call Southern Baptists to save America””