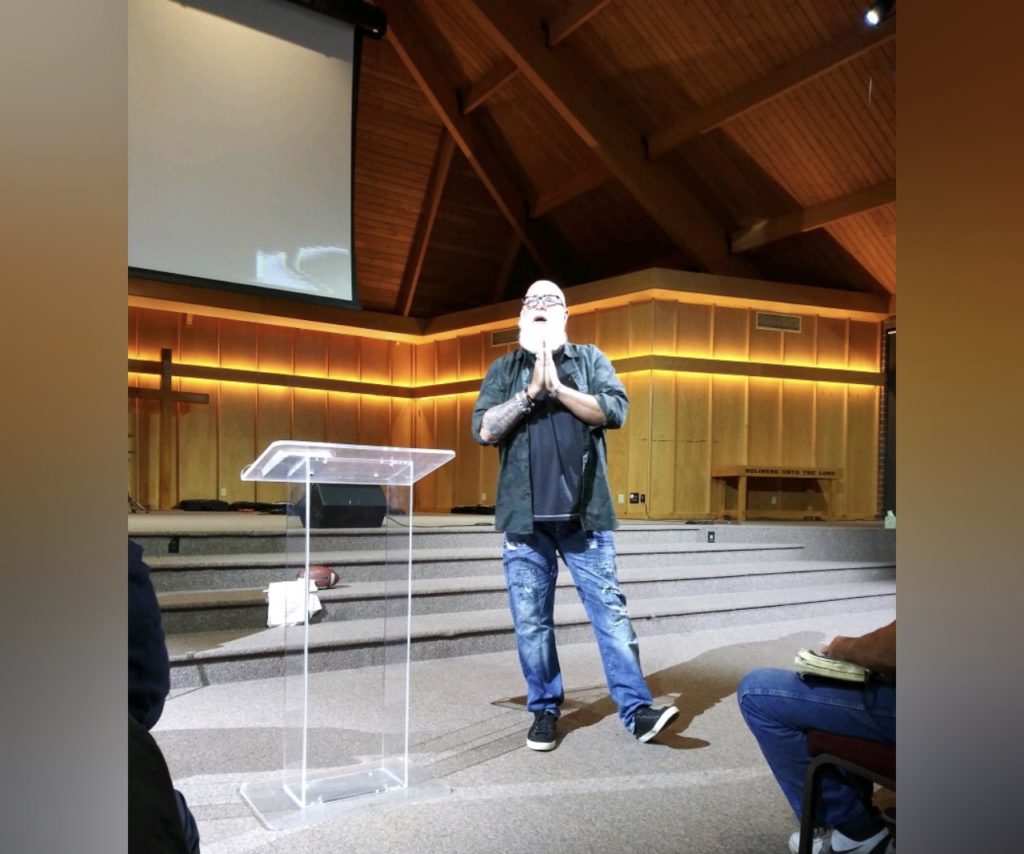 Disgraced former celebrity pastor, James MacDonald, this weekend made his first public appearance since being fired from Harvest Bible Chapel for engaging in conduct “harmful to the best interests of the church.” MacDonald reportedly taught at a men’s retreat for New Life Covenant Church, a Chicago-based megachurch that boasts a weekly, global attendance of 17,000.

On Saturday, someone sent me pictures of MacDonald at the retreat. This morning, Chicago radio personality Mancow Muller tweeted that men at New Life Covenant’s retreat were told not to take pictures.

Over the weekend, I reached out to New Life Covenant Senior Pastor Wilfredo “Choco” De Jesus for comment, as well as several other pastors at the church, but no one responded. I also texted MacDonald, who did not respond either. I contacted the leadership at Harvest Bible Chapel, asking whether anyone at the church knew about MacDonald’s speaking engagement. Harvest Lead Ministry Pastor Greg Bradshaw responded, “We were unaware of this event and have had no contact with New Life Covenant about it.”

New Life Covenant’s men’s retreat was held Friday night and Saturday at Wonderland Camp in Salem, Wisconsin. The picture sent to me of MacDonald preaching appears to have been taken in Wonderland Chapel (see picture at bottom of article). Also, several sources have confirmed that sitting next to MacDonald in another photo from this weekend is NLC Humboldt Park Pastor David Marrero.

On Sunday, my husband, Neal, attended New Life Covenant’s 10 a.m. service at its Humboldt Park campus where Marrero spoke. After the service, Neal approached Marrero and engaged him in conversation. However, Neal said that when he identified himself and inquired about James MacDonald speaking at the retreat, Marrero’s eyes got wide and he made a cut motion with his hand across his throat, saying, “I’m not answering any questions about James MacDonald.”

Lori Griner, a former member of Harvest Bible Chapel, attended a service Sunday at New Life Covenant’s Elgin campus. She told me that she spoke with Victor Rivera, associate pastor of the Elgin campus, who confirmed that MacDonald had spoken at the men’s retreat.

Griner said Rivera said he didn’t know of any plans for MacDonald to come on staff but added that he believed that MacDonald needed to be “restored.” I reached out to Rivera for clarification, but he did not respond.

Over the past 10 months, MacDonald has been accused of numerous offenses, including misusing church funds to cover personal luxury items and trips, bullying staff, and making deceptive and highly inappropriate comments.

MacDonald has not admitted to any of the allegations against him. Instead, he has filed for arbitration against Harvest, seeking ownership of his former broadcast ministry Walk in the Word. MacDonald also posted a statement on Facebook in August, alleging that “much is not at all what has been portrayed” and adding that he looks to the Lord for “vindication of false statements.”

New Life Senior Pastor Wilfredo De Jesus and MacDonald go back at least five years. According to social media posts, De Jesus spoke at Harvest’s Summer for the City outreach in 2014. NLC received money from Harvest after that event to replace the roof and siding of a boys’ home.

On its website, New Life Covenant says it is “one of the fastest growing churches in Chicago.” The church has six campuses in Chicago, one in New Jersey, and one in Connecticut, as well as more than 110 ministries reaching poor, homeless, prostitutes, and gang members.