Popular radio preacher and megachurch pastor, James MacDonald, has announced he is pulling his Bible teaching program, Walk in the Word, from all radio and TV platforms over the next couple months. The announcement comes about a month after my investigative report in WORLD Magazine, and subsequent blog posts, revealed allegations of spiritual and financial abuse by MacDonald and his Chicago-area megachurch, Harvest Bible Chapel.

In a surprise announcement to staff on Wednesday, MacDonald said he had decided to remove Walk in the Word from all “traditional” broadcast mediums and exclusively focus on digital delivery, like podcasts. MacDonald said the reason for the change was primarily pragmatic.

However, MacDonald also admitted that the current controversy is straining relationships with Christian broadcast ministries. Walk in the Word currently is broadcast on more than 2,000 outlets, including stations on the Moody Radio Network, Salem Radio Network and Trinity Broadcast Network.

“When our church goes through difficult times like of late, that becomes even more of a strain and a burden to carry in a way that none of you would ever even know what goes on behind the scenes.”

“There’s all the upkeep that’s going on with all the relationships,” MacDonald said. “When our church goes through difficult times like of late, that becomes even more of a strain and a burden to carry in a way that none of you would ever even know what goes on behind the scenes.”

Over the past several weeks, numerous radio listeners have told me that they contacted Moody Radio to complain about the network carrying Walk in the Word.

In an email to Greg Thornton, Moody senior vice president of media, listeners Tim and Jessica Hockett of Evanston, IL, wrote: “We trust that you are familiar with the recent controversies involving James Macdonald and Harvest Bible Chapel, including the (mis)use of donations from Walk in the Word . . . We ask that you would carefully consider the weight of all allegations and supporting evidence against James MacDonald and the Elders of HBC—including their decision to file a defamation lawsuit against 5 believers—and remove Walk in the Word from Moody Radio programming.”

Thornton responded, “While we’re not at liberty to discuss programming selections, we prayerfully and closely monitor the impact of all Moody Radio programs to our constituents, and we invite you to join us in continued prayer for a Godly resolution to the internal conflict at Harvest Bible Chapel.”

Even so, MacDonald maintained that his decision was something that he had considered for years, but especially in the month of December. He complained that Christian radio networks like Salem continue to give their prime-time slots to veteran broadcasters like John MacArthur, Chuck Swindoll, and even deceased preachers like J. Vernon McGee. This, MacDonald claimed, forced programs like Walk in the Word to pay two-thirds to three-quarters as much money for time slots that delivered less than half the audience.

He said Christian radio is “increasingly trapped in an old generation,” and claimed that the future is in digital delivery. “We want to grow . . . and reach more people than we ever have before,” he said, “but less of the, you know, 75-year-old lady in Kansas City who’s listening to her third sermon today, and more of the young adults, or even college student, who’s consuming their media on their mobile device.”

Below is audio of the announcement MacDonald made to the staff:

After this post published, I saw the following Facebook post by Rich McClary, general manager of Minnesota Christian Broadcasters Inc. Several radio executives told me the same off-the-record, but McClary was the first I heard say it publicly: 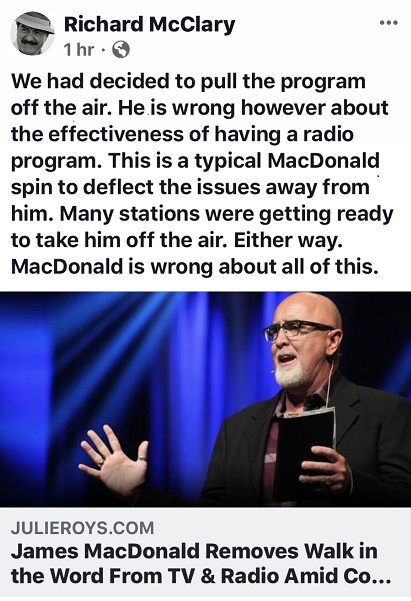