Nearly 10,000 people have signed a petition urging Liberty University President Jerry Falwell Jr. to extend spring break and move classes online in response to the coronavirus pandemic. But Falwell, who suggests coronavirus is the “next attempt to get Trump,” remains defiant—and yesterday called a parent of three Liberty University students “dummy” for objecting.

While many colleges and universities are closing in response to coronavirus, Falwell announced on Friday that Liberty will continue to hold in-person classes when students return from spring break on March 23. In an interview with “Fox & Friends,” Falwell stated, “It’s just strange to me how so many are overreacting.”

Falwell added that he believes media coverage of coronavirus may be politically motivated. “Impeachment didn’t work, and the Mueller report didn’t work, and Article 25 didn’t work,” he said. “And so maybe now this is their next attempt to get Trump.”

Within hours of Falwell’s comments, a group of students created a petition opposing Falwell’s decision. “We should be taking action like the other major schools in Virginia and transition to online classes for a period of time until it is safe to return to campus,” the petition read.  The petition also noted that Liberty is “extremely adept at creating online classes, as 94,000+ are enrolled in their online program.”

As of 8:45 (Central Time) this morning, the petition had 9,900 signatures. However, Falwell appears unmoved.

“I don’t want to become one of these college presidents who are pushing this problem off on someone else by sending 20 year olds with near zero mortality risk to sit at home for the rest of the semester, often with grandparents in the house who truly are at risk,” Falwell tweeted on Sunday.

In response, Jeff Brittain of Chesapeake Bay, Virginia, tweeted back, “So in 7 weeks, you’ll send the thousands of students, who now have a HIGHER risk of carrying it, back to their grandparents to get it . . . I think this is crazy, irresponsible and seems like a money grab.”

Falwell replied, “No then they’ll go off to summer jobs or internships dummy.” 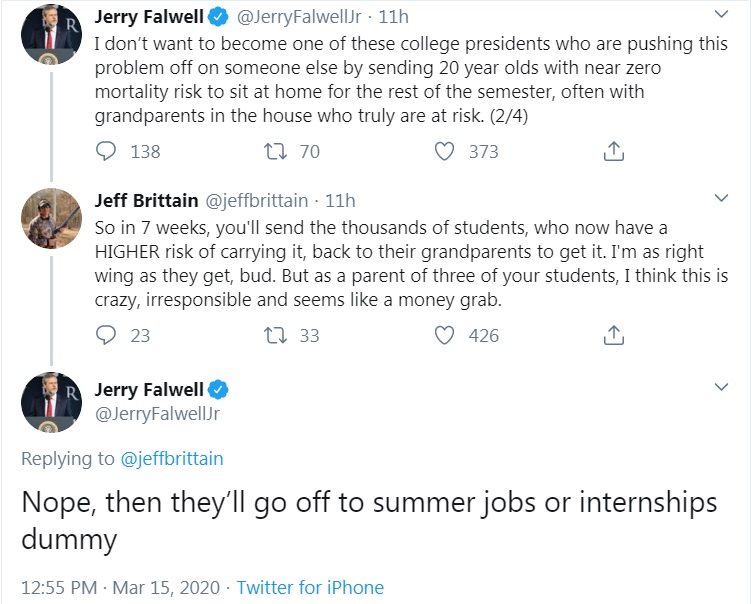 “What an odd thing to say to a parent who is paying you to educate their children,” tweeted Todd Picht of Lynchburg, Virginia.

Similarly, an account protesting abuse in the Southern Baptist Convention (SBC) tweeted: “Your behavior is appalling @JerryFalwellJr. . . . This is unbecoming any company top executive much less a Christian company.”

What an odd thing to say to a parent who is paying you to educate their children.

Your behavior is appalling @JerryFalwellJr. It's hard to imagine why you haven't been removed from @LibertyUniver leadership. This is unbecoming any company top executive much less a Christian company!

However, a few—like “Christian, wife, mom, grandma” @Linmarka—tweeted support: “Why do you assume they have a higher risk of the virus in 7 weeks? School can be an isolating arena and no grandparents are exposed. Think this is a bit over reacting. Fear & panic are creating irrational reactions.”

In other tweets, Falwell said the university would take some measures to curb the coronavirus threat, like moving classes to larger rooms, staggering meals to minimize crowding, and moving convocation to “online only.”

Falwell added, “Many other measures are in the works. @LibertyU will become the model for others to follow in the future.”

UPDATE: Due to Virginia Governor Ralph Northam’s emergency ban on public gatherings of 100 people, Falwell has announced that Liberty will transition most of its classes to an online digital format starting on March 23. “We originally believed it was safest to return our students following their spring break instead of having them return following greater exposure opportunities from leaving them in different parts of the country for longer periods,” Falwell said. “But, the Governor’s recent decision to limit certain gatherings has left us no practical choice because we have so many classes of more than 100 students.  We want to provide for the continuity of our students’ education while doing what makes sense to help slow the spread of the coronavirus to our university family and local community.”