It can be hard to know when your organization has an abusive leader.

So says Harvest Bible Chapel elder, Dan George, who once defended Pastor James MacDonald to the church’s elder board. However, the last in-person meeting between George and MacDonald was very different.

Over the course of that four-hour meeting, George saw MacDonald’s manipulation, cruelty, gaslighting, and flattery for what it was—bullying. And George says he realized that MacDonald wasn’t a victim, as he repeatedly insisted, but a predator.

Steven Hassan, an expert on cults and a mental health counselor, said in an interview with NBC that anyone, even very intelligent people, can fall prey to the deceptions of a toxic or cult-like leader or system. But he said those who don’t understand how these systems work are the most susceptible.

George unfortunately learned this lesson the hard way. He served as an elder at Harvest from 2010 to 2015, and then again from 2018 until his 2019 resignation.

In part two of our series on how to lead well, George shares vulnerably about his Harvest experience—and shares the lessons he’s learned in hopes that others won’t repeat similar mistakes. To read part one, click here.

Jackson Elliott: What was your experience from the inside of the James McDonald scandal at Harvest?

Dan George: In 2010, I joined the elder board. I served two consecutive three-year terms, from 2010 to 2015. Then I rolled off the board, although I was still technically an elder in the church, and rejoined the board actively in late December 2018.

The board changed a ton during that time. I joined when it was expanded from about nine to about 30 people.

It felt like you were you were stepping into a story that already had a lot of chapters written.

If I had it to do over again, I’d have more questions from the start. I’d like to have asked why we did things the way we do and why we were going the way we seemed to be going. I’m not exactly a shy guy when it comes to asking questions. But if I look back, I would have asked more questions and pushed back on how we did some things.

Elliott: Was there something suspicious about the way things operated at Harvest from the start?

George: Early on, it was hard to know that there were major problems. It’s probably hard in the beginning to look carefully at things.

What ends up happening is you step into a history, and the history gets presented to you by the people who are there. You don’t get to go revisit the history. Someone’s painting a story to you.

I’ve looked back at training from 2010. Some things strike me now when I look at them.

At the end of the training, there was a section called Fatal Elder Moves. There were five things on the list. The first was “a suspicious/scrutinizing/cynical spouse.” You were supposed to do all your eldering in the elder board meetings, not outside of that. You were only supposed to deal with the senior staff. They emphasized, “don’t have a breach of confidentiality, you can’t tell your wife everything.”

Elliott: Psychologically speaking, when people are in an abusive relationship, they sometimes struggle to realize it was abusive. Is abusive leadership like that?

George: Yeah. When you’re in the midst of it, you’re assuming good intent. You assume, “We’re serving, we’re doing the Lord’s work here.”

When you assume you’re the good guys, you don’t look at things that seem a little weird. You’re like, “Look! Look at what God’s doing. Look, there’s churches being planted, and there’s people coming to Christ. Look at the baptisms!” Some of the not-so-great parts, you just say it’s not a big deal.

Eventually, narratives get built up. And they’re just accepted. At one point, there was a discussion about how we were sailing into bigger ministry waters.

People were like, “Well, then we should accept the fact that there will be choppy waters.”

Well, that’s interesting. Why are you saying that?

Elliott: What helped you realize something was wrong?

George: What helped me a ton was rolling off the elder board for a little bit and then coming back. That gave me a new perspective.

When you think about healthy boards, I don’t want “lifetime elders,” in terms of always being on the board. I think there’s a temptation in that. It can become my identity instead of a way I serve.

It also can be intimidating to other people joining the board. I’m not suggesting that you immediately replace your whole board. But when you’re sitting in a room with someone who’s been there from the start new people tend to defer.

Elliott:  Was there a specific incident when you realized something was wrong at Harvest?

George: I remember one of the guys saying that they were going to reform the leadership team.

I just said, “Hey, I’m open to it.” When we got to the next elder meeting, it was presented as: “Everybody on the leadership team has resigned to make room for new people.” I thought, “You didn’t ask me to resign.”

That’s a little bit deceptive. That’s misrepresenting what the conversation was. That just bugged me a bit.

When I came back on the board, it was significant when John Secrest (former pastor of Harvest Bible Chapel Naples) was fired.

I had never talked to John, because I heard about his firing from a friend of mine. I told the chairman, “We need to talk. No senior staff person can be fired without the elders even knowing about it ahead of time.”

That was the tipping point.

Elliott: How can people do better at noticing when things are going wrong?

Are elders isolated? Can elders talk with each other? Are the elders visible to the congregation?

How much does the church talk about itself versus Jesus and his sheep? If we’re always talking about just our entity versus the people and the Lord, I wonder about that.

Are pastors prioritized over the elders? If you start to create the idea that the pastors are higher than the elders, how does an elder hold the pastor accountable?

The other thing I’d really watch for is who gets on the board. If you’re not a shepherd, you’re not an elder. The idea that elders should get on the board because of their skills instead of how they shepherd people, I don’t see that in Scripture. I saw at Harvest that business experience was prioritized over spiritual gifts.

There’s a cancer in the church in America where the teaching gifts are prioritized, but shepherding is a “nice to have.”

We found ourselves talking about “our church” and whatever God’s doing at “our church” more than we’re talking about Jesus. I don’t even like giving that answer. I think that really was the case. When you’re running around with T-shirts and sweatshirts and hats with your church’s name on it, at some point it becomes a brand. Some of this is wise, and but some of it feeds idolatry.

Elliott: Do you think there was any policy Harvest could have implemented that would have kept things from imploding the way they did?

George: There was a period where we had somebody sitting in our meetings that was functioning as the chief organizational health officer, which was great. That person would ask three or four questions at the end of meetings about how we were approaching problems.

Some examples were, “Did we ask tough questions?” “Are we holding ourselves to a high standard?”

Also, as soon as bad behaviors in a leader come up, you should call them out. It doesn’t have to be big. If you wait till these things are big, how do you walk those back? The whole idea of “short accounts” would be a big deal to me.

Elliott: What would your advice on elder selection be today?

George: If I were looking for elders, one of the biggest things I’d be looking for is that they are not overcome by fear or by cowardice. Somebody needs to be around them for a while before they join the board to see what kind of person they are. Elders need to have moral courage. They need to be able to stand up and do what’s right. 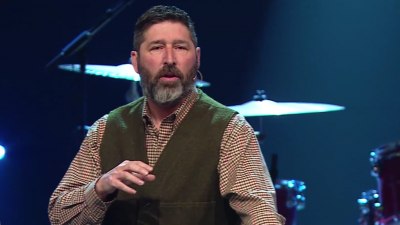