Facing allegations Liberty University mishandled Title IX sexual abuse cases, university President Jerry Prevo today pledged at a student convocation to “clean up” anything that “needs to be cleaned up.”

Prevo also promised that Liberty will not punish students who report sexual assault or harassment, even if they were breaking the school’s honor code when an incident happened. And he pledged to install a dozen “blue” emergency callboxes on campus and to invest $8.5 million to install dozens more video cameras on campus.

The announcement was met with cheers by the student body. And longtime Liberty trustee and campus pastor, Jonathan Falwell, praised Prevo and the board, saying: “They are 100% committed of doing the right thing—not for PR, but because it’s the biblical and godly thing to do.”

But one of the women in a  lawsuit filed by 22 “Jane Does” against Liberty noted that she repeatedly urged the school to install cameras and call boxes in 2005 after she was gang raped. And one of the officials she emailed in 2005—informing him of her “sexual assault” and pleading with him to install “security cameras/call buttons”—was Jonathan Falwell.

Liberty University has said Falwell “reports no recollection” of the 2005 email, which The Roys Report has obtained.

“The addition of callboxes and security cameras to campus is the right thing and I am thankful for the positive changes,” said the woman, known as “Jane Doe #2” in the lawsuit. “Yet, Jerry Prevo asked (in today’s convocation), ‘Why don’t we have these things?’ and the reason is because the administration and the board has ignored victims.”

Then noting Falwell’s claim that Liberty is making the changes because it’s the “godly thing to do,” she said: “That couldn’t be further from the truth. Everything happening now is because survivors started sharing their stories of victimization, investigations began, and supporters began to rally.”

Prevo’s comments come a week after Liberty’s former vice president of communications, Scott Lamb, also filed a lawsuit against the school. Lamb’s suit claims that Prevo fired him in retaliation for Lamb’s objections to the university’s mishandling of Title IX violations named in the lawsuit by the Jane Does.

The school denies Lamb’s allegations and instead claims he was “terminated-with-cause.”

Today, Prevo referred to allegations in the in the Jane Does’ lawsuit that Liberty “weaponized” its honor code—the “Liberty Way”—to punish victims who reported crimes.

Prevo said “it’s been insinuated” that violators of the code will be punished if they report a sexual crime or misconduct. But he insisted, “You are not going to be disciplined for that, if you come and you have a legitimate complaint that you have been sexually harassed, sexually assaulted, dating and domestic violence. You’re going to have what we call amnesty.”

But Prevo also warned would-be reporters of sexual offenses: “If you’re doing something wrong, don’t claim that something happened to you that was false, alright?”

Though Prevo was chairman of Liberty’s board at the time of the sexual assault cases in the Jane Does’ lawsuit, he said today he does not know what happened before he became president.

But he added, “I can tell you this: we’re not going to try and cover up anything. We’re going to look back, have that investigated. And also, if we’ve done wrong, we’re going to correct that wrong the best we can.”

Tomorrow, a press conference with abuse survivor advocate and attorney, Rachel Denhollander, is scheduled for 3:30 p.m. Eastern Time at a hotel in Lynchburg, Virginia.

According to a press release by the alumni and student reform organization, Save 71, and victim advocate group, “Justice for Janes,” Denhollander is calling for an independent investigation into the university’s handling of sexual assault cases.

Following Thursday’s press conference, Denhollander will lead a rally and prayer event with Liberty students outside the Hancock Welcome Center, the release said. Liberty’s trustees are scheduled to meet inside the Hancock Center at the time of the rally, according to the release.

The Roys Report reached out to Liberty University for comment about tomorrow’s events, but no one immediately responded.

Student leaders organizing a prayer rally to call for a proper institutional response to the crisis facing LU, were told I could not come on campus. 3 yrs ago I was invited to teach on this. Today, when it is needed, it is no longer wanted. Aching to see a heart change tomorrow. 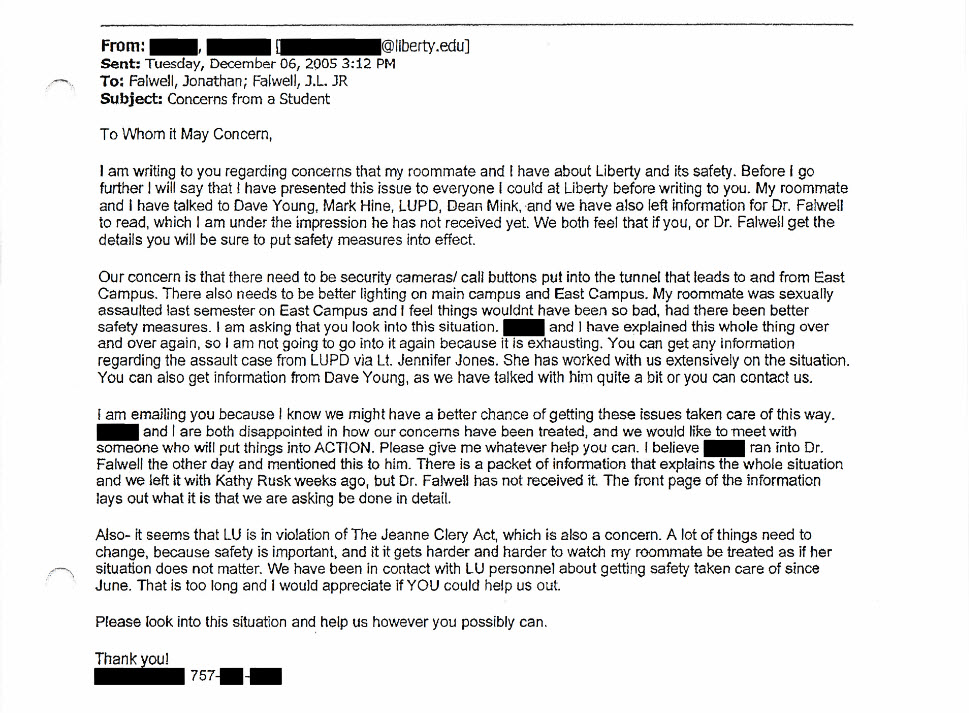 EXCLUSIVE: Plaintiff in Class-Action Lawsuit Accuses Liberty U of ‘Retraumatizing’ & ‘Insulting’ Jane Does

In an exclusive interview with The Roys Report (TRR), a rape victim and plaintiff in a highly publicized class-action lawsuit against Liberty