Originally from Argentina, Palau evangelized alongside Billy Graham. In the course of his life, he reached an estimated 1 billion people around the world with the message of the Gospel. He was also friends with Pope Francis.

“We don’t know exactly how much time we have left with Dad, but the end seems near,” Palau’s son Andrew Palau in a Facebook statement. “He is in good spirits and not in pain, which is a blessing. His final wish is to be able to spend one-on-one time with each one of his grandchildren. That time has definitely been sweet.”

On Feb. 19, doctors and Palau’s family decided to stop all treatment after the evangelist took a “turn for the worse,” his son said. His body could no longer handle the drugs and radiation to fight lung cancer.

“The only sad thing is leaving my wife and my kids and the team and a few of my best friends,” Palau told CBN News in a February 2020 interview about his cancer diagnosis. “But really, I’m ready to go. I have the peace of the Lord.”

Palau spent his youth caring for his five siblings and his mother, according to his 2019 memoir. In his book, he said Billy Graham’s preaching led him to become an evangelist. He moved to the United States in 1960 to do ministry work.

Palau preached for 50 years around the world. His largest single-day audience was in Guatemala City in 1982, when 700,000 people listened to him share the Gospel. Millions listen to his radio broadcasts in Spanish and English.

Palau continued to publicly minister. In 2015, he hosted an event in New York which shared the Gospel with 60,000 people.

In April 2019, he authorized a biopic about his life as an evangelist.

At 86, Palau has four sons and several grandchildren.

“I love what I see in the new generation of [Christian] leadership in America, Latin America, Europe, even,” he said to CBN. “My boys are men, middle-aged men, and they walk with God.”

He also told CBN that he thinks it’s time to step aside and allow his sons to take up the ministry mantle “without relinquishing love and caring for my sons.”

Palau said that he wants the next generation of believers to find their own ways to minister.

“I used to say when people would ask me years ago, I’d say, ‘I hope my boys will put on my burial tomb: My father wasn’t perfect, but he sure loved Jesus Christ,'” said Palau.

“Thank you for your love and prayers. We are all at peace. We serve a good God who loves us beyond compare,” said Andrew Palau. 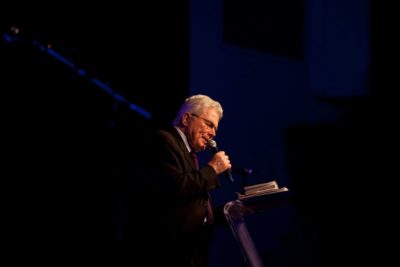 Luis Palau, a Christian evangelist known for his smile and hearty laugh and described by some as “the Latino Billy Graham,” died