Eric Metaxas Says Protester Menaced Him, but Won’t Say Whether He Punched the Man

Popular Christian author and radio host, Eric Metaxas, told a Christian magazine that a protester on a bike harassed him after he left the White House last week, but Metaxas initially would not say whether or not he hit the protestor. This, despite a recent viral video in which a man resembling Metaxas punched a cycling demonstrator.

Instead, the radio host blamed the protester when asked about the incident. “For context, just so you know, the guy came at me with his bike and was very menacing for a long time,” Metaxas told World Magazine.

But a man who identified himself as the demonstrator in question — and who runs the Instagram account that posted the viral video of the encounter — disputed Metaxas’ description of events.

“He attacked me,” the man, who declined to disclose his name, told Religion News Service. “I wasn’t threatening or intimidating. I was on a rented bicycle! He clearly punched me from behind.”

Last week, a video began circulating on social media showing a man who closely resembles Metaxas striking a protester and running away backward.

The video, posted to Instagram early Friday morning (Aug. 28), shows a demonstrator wearing a “Portland” shirt riding a bike through a group of individuals dressed in formal attire. The group appears to be leaving President Donald Trump’s final address to the Republican National Convention, which was late Thursday night.

In the video, the demonstrator shouts several profanities, including one mentioning Trump, while riding through the group — but does not appear to physically engage with anyone.

Then a man who resembles Metaxas punches the demonstrator, who stumbles off his bike.

The man is wearing the same outfit Metaxas was seen wearing in pictures and in video that Metaxas posted to his own Instagram account earlier in the day. Standing next to the man is a woman wearing a dress that matches one worn by his wife, Susanne, in those same Instagram pictures.

In the video, a woman can be heard shouting, “Eric!” as the demonstrator pulls himself off the ground while yelling at his assailant. In response, the man who resembles Metaxas swiftly backpedals.

The demonstrator follows, saying, “You just attacked me, bro.”

As the man who appears to be Metaxas leaves, a woman can be heard again shouting, “Eric!”

As the demonstrator continues to shout at a small group of people walking by, police then approach the angered protester — not the man resembling Metaxas — as he yells that he “didn’t touch” the other man. The video cuts out as the protester turns to confront the officer following him.

In a separate video posted to the same Instagram account, the demonstrator can be seen in handcuffs insisting, “I didn’t touch him!” (WARNING: Video contains profanity.)

In a third Instagram Live video, the demonstrator said that he was detained by the Secret Service but suggested that he was released after a bystander showed authorities video of the event.

“I don’t want the dude to get charged, I just want awareness that Republicans are attacking people,” he said.

Religion News Service reached out to the “antidote503” Instagram account that posted the videos on Friday. The person who responded said they were the individual assaulted in the video. When asked whether they believe the man who punched him is Metaxas — images of whom the account posted earlier in the day — the person replied, “It’s definitely him.”

He also said that he may pursue a civil case against Metaxas.

Metaxas, best known for his 2011 biography of theologian and Nazi opponent Dietrich Bonhoeffer and his pro-Trump “Donald the Caveman” books, has largely avoided commenting publicly about the incident. He did not respond to multiple requests for comment from RNS but told World Magazine he had “chosen to go off social media till now and not to comment on any of this.”

But Metaxas did tweet a link to a somewhat satirical piece about the video of the punch in which the author appears to defend Metaxas.

He has also taken to social media to compare Black Lives Matter protesters to Nazis.

“Today in 1939 Hitler invaded Poland, CLAIMING Poland had attacked Germany,” he tweeted. “That was a lie. When Antifa/BLM claim to care about Black lives, understand they will say & do ANYTHING to destroy the America they hate. They would have killed George Floyd if it would have helped them.”

Today in 1939 Hitler invaded Poland, CLAIMING Poland had attacked Germany. That was a lie. When Antifa/BLM claim to care about Black lives, understand they will say & do ANYTHING to destroy the America they hate. They would have killed George Floyd if it would have helped them.

At least one friend has defended Metaxas: After viewing the video, author and blogger Rod Dreher wrote a post entitled “Christian Dandy Throws a Punch,” calling his friend one of the nicest people he knows and saying the cycling protester deserved to be smacked.

“But I tell you, there’s a part of me that was not sorry to see Eric punch the guy, though it was apparently just a glancing blow,” Dreher wrote.

“You just get so sick of these people and their filthy mouths, and their berserk screaming at people. You get sick of the pornification of the public square, and the degeneration of civil standards. Sometimes you have to use violence to preserve order.”

Metaxas was one of about 150 evangelical Christians who have informally advised President Trump present at the president’s speech Thursday at the White House, which closed out the Republican National Convention. Most sat together during the address, according to one pastor in attendance.

Bishop Harry Jackson of Hope Christian Church in Beltsville, Maryland, told World Magazine he left the White House Thursday with Metaxas and his wife and that the group was cursed at by protesters as they walked to meet an Uber.

That’s when Jackson said a bicyclist began swerving close to Metaxas while swearing at the group and at the president, which the bishop described as “playing chicken” with Metaxas and said was so intimidating that he wondered if he’d have to use his cane for defense.

Other evangelical leaders tweeted after the speech that they also were confronted by protesters near the White House.

Paula White, who heads the White House’s Faith and Opportunity Initiative, said she and other leaders were harassed by protesters.

150 faith leaders were invited to be with @realDonaldTrump last night as he addressed the country. As we left the WH, marxist, leftists, "Wanna be Che Guevara's" bullies threatened everyone – women, elderly, no limits! Vulgar! In our face, harassment! NO MORE! Stand up- ENOUGH

And Pastor Jack Graham said the group was confronted by “filthy blasphemous infidels.”

Pastor Jentezen Franklin described the confrontation Graham mentioned in his own tweet, saying the group was “cursed and threatened.

“I eye-witnessed one of our group be attacked but thank God police were there to arrest the violent attacker,” Franklin said.

(This story has been updated.) 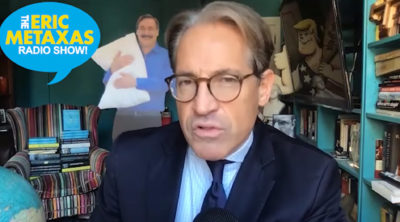 Eric Metaxas Sued for Defamation Over Claims of Voter Fraud

111 thoughts on “Eric Metaxas Says Protester Menaced Him, but Won’t Say Whether He Punched the Man”