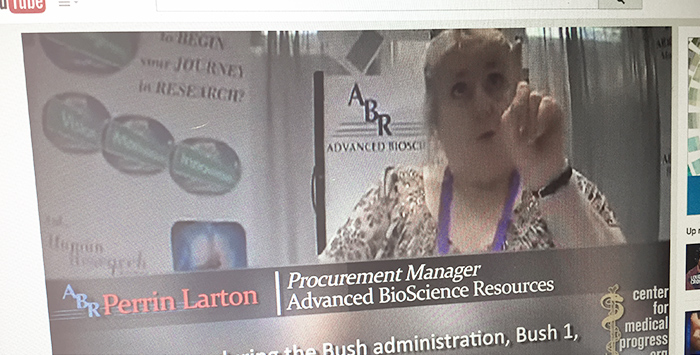 A ninth undercover video exposing Planned Parenthood’s trade in fetal body parts released today reveals that sometimes babies drop out of their mothers in clinics before they’re fully aborted. Though the taped conversation doesn’t say what’s done to these babies, the context indicates that these live babies may be killed and harvested for parts.

The video features Perrin Larton, a procurement manager for ABR, a company that secures fetal tissue from Planned Parenthood and then sells it to research labs. In the video, Larton tells anundercover investigator that abortion clinics try to avoid having live births, but then admits it happens.

“I literally have had women come in and they’ll go in the OR (operating room), and they’re back out in three minutes,” Larton says. “And, I’m going, ‘What’s goin’ on?’ ‘Oh yeah, the fetus was already in the vaginal canal. Whenever we put her in the stirrups, it just fell out.’ . . . If they’ve had a lot of births, then that’s kind of what happens.”

Larton then says that over the past three months, she’s been able to send two intact “Biliary tree area” specimens, suggesting that these babies that fall out are dissected and sold. (The Billiary tree is a system of vessels that directs secretions from the liver, gallbladder and pancreas to the duodenum.) Then, Larton laments that in most abortions, the fetus is not intact and the doctor often destroys many of the organs she would like to procure. “The abdomen is always ripped open,” she says. “A lot of times the abdomen presents first and they just go in and start pulling.” Then Larton gives two thumbs up and says, “Whenever we have a smooth portion of liver, we think that’s good.”

The video also provides additional evidence that Planned Parenthood is profiting from this trade in fetal body parts, which is illegal. The beginning of the video includes a discussion between Dr. Katharine Sheehan, former director of Planned Parenthood of the Pacific Southwest, and undercover investigators posing as buyers of fetal tissue. Sheehan tells the buyer that her clinics have a relationship with ABR and have been using them for 10 years. Then, the buyer, attempting to lure Sheehan away from ABR, says, “We return a portion of our fees to the clinics.” Instead of turning down such a proposal because it is illegal, Sheehan says “Oh!” indicating an openness to the idea. Then, when the buyer suggests that payment is a way of thanking clinics, Sheehan says, “Right, get a toe in and make it, make a pro- . . .”

Further in the video, there’s a discussion between undercover investigators and Cate Dyer, CEO of StemExpress, another company like ABR, which secures specimens from Planned Parenthood clinics and then sells them to research labs. Dyer explains that, unlike ABR, which is a nonprofit organization, StemExpress is for-profit and offers money to clinics for fetal body parts. Dyer says she tells staff at Planned Parenthood clinics, “We’re trying to give money to you.”

Dyer also suggests that ABR runs a deceitful business because it says it’s non-profit, but its executives are using funds to buy “places in Hawaii for themselves.” She also says that ABR secures its partnership with Planned Parenthood by actually putting Planned Parenthood staff on its payroll. “Like a nursing director,” Dyer says, “who’s literally like, like a paid (ABR) employee.”

Information highlighted earlier in the video also suggests that ABR is making a hefty profit for its “nonprofit” activities. In an August 27, 2015 letter to Congress, Planned Parenthood CEO Cecile Richards admitted that ABR pays Planned Parenthood $60 per body part harvested. According to an ABR brochure in the video, ABR charges $340 for each 2nd Trimester specimen and $550 for each 1st Trimester specimen.