Apparently, there’s one set of standards for regular people and another for celebrity pastors—even in the secular world.

Recently, someone identified merely as “a well-known pastor from North Carolina” urinated on a passenger on a flight from Las Vegas to Detroit. (Yes, you read that correctly. In the middle of a flight about a week and a half ago, a woman was rudely awakened by a man peeing on her. And according to news reports, the perpetrator is a prominent pastor.)

Normally, the name of the perpetrator would be public record. After all, the man was taken into custody by the FBI and issued a citation for misdemeanor assault. And the Freedom of Information Act (FOIA) mandates that the public has a right to records from federal agencies.

But today, the Winston-Salem Journal reported that federal and state authorities in Michigan are continuing to withhold the pastor’s identity.

Ronald Wright, a professor of criminal law at the Wake Forest University School of Law, told the Journal that he suspects federal authorities are using an exception to FOIA.

“In the short run, they are saying they can withhold the (pastor’s) name until the court process gets underway,” Wright said.

He added that once the case is filed in federal court, the records must become public. Normally, this process takes a few hours, Wright said. But here we are, a week and a half after the citation was issued, and there’s nothing.

This is chilling. Over the past several years, I have seen evangelical celebrities wield their influence within their own organizations and the “evangelical industrial complex” to cover up all manner of sins. But I never would have guessed a megachurch pastor could impose his will on the FBI.

To me, the story now isn’t so much about a pastor peeing on someone, which is bad enough. It’s about all that’s transpired to cover it up.

Another chilling aspect of this story is that the victim is no longer speaking.

Immediately following the incident, the woman who was unceremoniously doused—Alicia Beverly—was quite talkative and spoke with a TV crew. But now, Beverly’s not saying a thing. I reached out to Beverly but haven’t received any response.

This is quite common in the evangelical world. Normally, such silencing involves money and an NDA. It’s unbelievably carnal, but sadly, incredibly common.

I have no idea if anything like this has happened in this case. But I do see indications that the pastor has quickly marshalled his forces.

The initial report of the incident mentioned that “representatives for the pastor” claimed that the pastor “was suffering from a reaction to a sleep aid he took.”

I have a feeling these “representatives” are working overtime right now. I can only imagine the scrambling that’s happening behind the scenes to keep this whole situation under wraps.

This is what the evangelical machine has produced—pastors who are such an embarrassment that they need a team to cover up their bad behavior.  These men and their “representatives” are an insult to the many hard-working, godly, and underpaid pastors that comprise the bulk of evangelicalism. And they’re an insult to the Bride of Christ. It grieves me to see this happening.

I will continue to follow this story, but I’m beginning to wonder if the truth will ever come to light.

According to the Winston Salem Journal, the U.S. District Court for the Eastern District of Michigan has cancelled its “misdemeanor ticket call” because of the coronavirus pandemic. And according to a court spokesperson, there is no date set for it to resume.

Perhaps in the meantime, this pastor and his “representatives” could do the Christian thing and confess this bad behavior and apologize. But I doubt it. There is a brand to protect and likely millions of dollars at stake.

And clearly, the rules that apply to us don’t apply to this pastor. 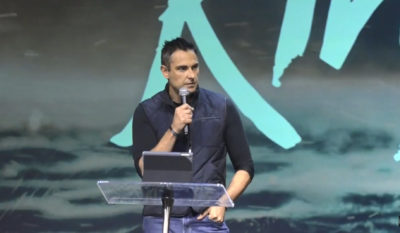