Last week, the website for Global Fire Ministries published a statement, saying that Jansen had “made an intentional decision to leave his wife and family” and that his “character flaws” had “disqualified (him) from New Testament leadership.”

It added that Jansen had been asked “by his board to step down as Co-Senior Leader of Global Fire Ministries and Global Fire Church due to . . .  unbiblical behavior.”

However, according to Global Fire’s latest IRS 990, there are only two members on Global Fire’s board—Jeff Jansen and his wife, Jan Jansen.

Similarly, Global Fire Church formerly was run by “Senior Leaders” Jeff and Jan Jansen, according to an church webpage archived in November 2020; its now run by Jan Jansen and the church website does not list any elders or board.

According to the Tennessee business records, Jan Jansen is listed as the registered agent for both Global Fire Ministries and Global Fire Church.

Three days ago, he posted a message on Instagram vowing to “not back down from the mandate” or “quit.”

He added, “There is much to do in this season of Global Glory Revival and international transition…Jesus is King.”

Jansen also promised he’d “be bringing an update interview soon” that would be “graceful and vulnerable.” Jansen has published other posts since then, but none have contained any update.

Responses to Jeff Jansen on social media have been mixed.

“C’mon Jeff…. you need to own up to what is really going on with you and your ministry. They are saying they threw you out, so what is the truth here???” said follower Christine Braniff.

Another posted, “The Kingdom suffers violence and the violent TAKE IT BY FORCE…The Holy Remnant shall take back ALL, RECOVER ALL, that was stolen.”

In the meantime, Jeff Jansen has posted several inspirational quotes that may be referring to his situation.

One reads, “Don’t let nobody who ain’t been in your shoes tell you how to tie your laces!!”

Another reads, “A wise man once said, ‘be careful who you let on your ship, because some people will sink the whole ship just because they can’t be the captain.’”

Jeff and Jan Jansen have been married 26 years and as of last summer, had eight children and 18 grandchildren. Last year, Jeff posted an Instagram post praising his wife.

“Thank you baby for being the constant in the ups and downs … you are incredible,” he wrote.

Jeff Jansen’s “prophetic” ministry has been marked by its audacious predictions and alleged miraculous signs.

Jeff Jansen has shown people gemstones that he claims miraculously appeared during prayer. He has claimed that feathers that fell at one of his worship services came from angels. Jansen has also visitedgraves in attempts to soak up spiritual power.

Furthermore, he has continued to predict that Donald Trump will return to the presidency, despite multiple failed predictions of Trump victories in the past.

Besides his unfulfilled prophecies about Trump, Jeff Jansen prophesied that the year 2020 would be a year of “double anointing.”

However, the church statement adds that Jeff Jansen had a “pattern of making poor moral choices, bad coping mechanisms, and character flaws.” It emphasizes that his misconduct occurred at home, at work, and in church.

The statement further says that Jansen refused to submit to “the process of healing and restoration” and that “any pursuit of further ministry on Jeff’s behalf is not under the umbrella and blessing of Global Fire Ministries.”

The Roys Report also reached out to Jeff Jansen but he did not respond.

UPDATE: Jan Jansen responded to The Roys Report after this piece was published and said Global Fire Ministries made changes to its board last year, which is not reflected on the ministry’s last published 990 (2018). When asked to provide the names of board members and a more recent 990, Jansen replied, “This is simply not your business.”

UPDATE: Jeff Jansen posted an update on Facebook and Instagram, saying he would never abandon his family. “I don’t deny it has been difficult for a long time,” said Jansen. “I have made mistakes, but I learned from them. I have weaknesses and areas that need attention like the rest of us in the human race–but they make me stronger.”

Jansen added that his continued belief that Trump won the 2020 election and media coverage of his position created a “crushing weight on an already struggling marriage.” He said his extensive travel also caused pain to his family, which was his fault.

Jansen reiterated that he will post a “very vulnerable and transparent” discussion with ministry leaders in the near future.

Jackson Elliott contributed to this report. 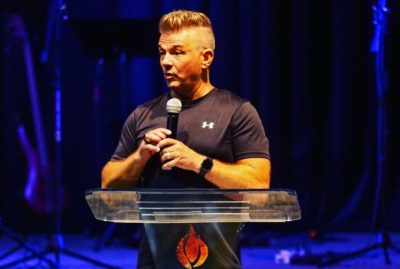 Self-Declared “Prophet” who Left Wife has History of DUIs

Jeff Jansen, the self-declared “prophet” and co-founder of Global Fire Ministries, who recently left his wife, has a history of driving under