The six-bedroom mountain view estate commands 14.38 fenced-in acres with vacant lots on all sides, according to the Redfin property listing. Ramsey is selling the home with 14,000 square feet of living space, fully furnished.

The home’s luxury features include three staircases, five fireplaces, an elevator, its own private water source, and an advanced air filtration system. The property has nine bathrooms, including one with a reported 18 shower heads.

The outside of the house is as palatial as the inside, with 6,000 square feet of covered outdoor space. Its features include patios, porches, and terraces. Its driveway encircles a fountain and connects to three garages with space for eight cars. For entertainment, it has an infinity-edge pool and spa, as well as several other entertaining spaces. The house is strategically placed so its residents can watch the sunset from the pool in the back.

Brentwood-based Capital Realty Group, led by Ramsey’s son-in-law Winston Cruze, has the listing, according to the Nashville Business Journal.

Ramsey Solutions spokeswoman Megan McConnell told the Business Journal that Ramsey and his wife Sharon plan to build on land they own south of the city.

Ramsey Solutions, one of the largest employers in Williamson County, Tennessee, employs over 800 people. Dave Ramsey hosts the third-largest radio talk show in America, The Ramsey Show, heard by more than 14 million listeners each week on more than 600 radio stations.

Lately, Ramsey has been the focus of controversy for allegedly bullying employees, exerting a “cultlike” control over them, and flagrantly violating COVID-19 precautions.

Ramsey also made controversial comments on-air about stimulus checks. If $600 or $1,400 changes someone’s life, they are “screwed already,” Ramsey said to Fox News.

Realtor.com pegs Ramsey’s net worth as $475 million. His books have made The New York Times’ best seller list

Anne Stych of MinistryWatch also contributed to this report.

Chris Hogan left Ramsey Solutions this week, apologizing for personal actions “not in line” with the company. But Hogan’s former wife, Melissa 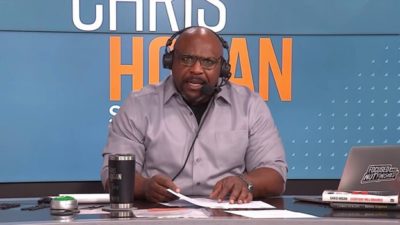 The company owned by Christian financial guru and radio show host Dave Ramsey has lost one of its best known personalities. Chris