The rape victim whose story prompted the board at Southwestern Baptist Theological Seminary to fire former President Paige Patterson in 2018 has just come forward with a major revelation.

The woman, Megan Lively, says Cedarville University President Thomas White participated with Patterson in the alleged cover-up of her rape in April 2003. Lively added that in the months that followed, she was required to meet multiple times with White’s wife, Joy White, now an assistant professor of women’s studies at Cedarville, as part of a “disciplinary plan.”

“I was made to feel like what happened to me was my fault,” Lively said. “The sexual assault was downplayed,” Lively added, saying that those involved tried to convince her that what had been done to her was not rape.

I reached out to both Thomas and Joy White for comment. Thomas White responded: “To my knowledge I never met with Megan, and I am certain that she did not report a rape to me. Yes, my wife Joy was involved in a few discipleship meetings with Megan but never heard of an incident of rape.”

Lively first told the story of what had happened to her at Southeastern to The Washington Post in May 2018. Lively alleged that when she reported her rape to Patterson, he encouraged her not to report to authorities, but instead to forgive her assailant.

About a week after that report, Southwestern fired Patterson, saying that he had lied to the board about the rape and had withheld documents from his time at Southeastern. They also said Patterson tried to meet with another sexual assault victim in 2015, with no other officials present, so he could “break her down.”

The day Patterson was fired, Thomas White published a statement, saying he didn’t know whether Patterson would remain on Cedarville’s board of trustees. Patterson, a close friend of White’s, stepped down from the board five days later. Patterson had served as a trustee since 2013—the same year White became president of Cedarville.

White also said in his statement: “Regarding the article where The Washington Post claimed that Patterson encouraged a woman not to report an alleged rape to police, I was not in the room for the meeting and did not handle this matter though I did work at Southeastern Seminary during this time.”

Lively said she didn’t say anything about the Whites’ involvement when she first told her story in 2018 because the focus was on Patterson and she “didn’t want to detract from that.” However, Lively said that after hearing a podcast I published this week involving a rape victim at Cedarville, she felt compelled to speak.

According to Lively, the morning after she was raped, she met with White and others in White’s office and told them what had happened. Lively added that she never used the word “rape” in her discussions with White.

“For 15 years, I couldn’t say that word out loud, although what I reported was rape,” she said. “And I don’t know if it’s because . . . I didn’t want to admit it to myself. I have no idea. But I can say it now because of counseling and EMDR (a kind of psychotherapy treatment for trauma victims).”

Lively said Patterson eventually took over the process and there was a second meeting in Patterson’s office where White and several other proteges of Patterson’s were present.

Lively said after the meeting with Patterson, neither Patterson nor White nor any of the other men present reported her rape to police. The Washington Post confirmed in 2018 that a report was never filed with the Wake Forest Police Department.

I reached out to Patterson to ask him about the meeting with Lively and White’s involvement, but he did not respond.

Lively showed me minutes of the first meeting on April 4, 2003, that she says took place in White’s office. The minutes do not mention that White was present, though Lively said she is confident he was there.

Heather Sapp, a friend of Lively’s who worked as the administrative assistant for the student life office at Southeastern in 2003, also says White was present at the meeting with Lively.

Sapp said she worked in the reception area outside White’s office. And she remembers seeing Lively come in one day “agitated, emotional, and nervous” and meet with White in his office.

Sapp added that at the time, Lively didn’t tell her what the meeting was about.  “She also seemed embarrassed that I was aware of her meeting, so I didn’t ask any questions,” Sapp said. “I figured if she wanted me to know, she’d tell me.”

However, in 2018, Sapp said Lively divulged that the meeting with White in 2003 had concerned her rape.

Lively said Southeastern placed her on probation after she reported her rape but she didn’t know why. As part of that probation, Lively said she was required to meet with Joy White.

“She started our disciplinary plan with a very judgmental statement that questioned whether or not the sexual activity had been consensual,” Lively said. Lively said that “set the tone” for the rest of her time with White.

“She started our disciplinary plan with a very judgmental statement that questioned whether or not the sexual activity had been consensual . . .  And I just sat there and listened. I didn’t respond.”

Patterson has consistently denied the allegations against him and maintained that Lively confessed in 2003 to consensual sexual conduct and “referred to it as sin on her part.”

However, current Southeastern President Danny Akin has said that institutional records show that Lively had reported that “a nonconsensual sexual act” had been performed against her. Akin also has said that seminary documents show that after her alleged rape, Lively went to administrators and was sent to meet with Patterson on “three separate occasions with three other men present.”

Currently, Thomas White is on administrative leave at Cedarville, following a major controversy there involving White’s hiring of Dr. Anthony Moore, an admitted sexual abuser. Cedarville said it is hiring an independent firm to investigate the process surrounding Moore’s hiring, but has not revealed any details about the investigation. 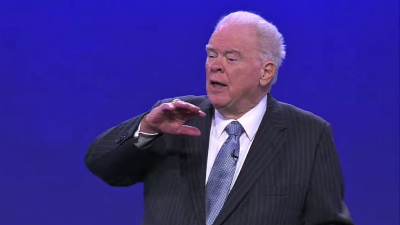 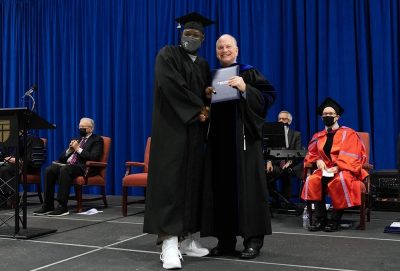 After Earning Pastoral Degrees, 24 Inmates to Minister in NC Prisons

Twenty-four men wearing black caps and gowns strode across the stage of the Nash Correctional Gym in Nashville, N.C. last week to