The organizers of America’s Revival love Jesus and America, too.

And they believe God still has a plan for the United States.

“He loves the United States,” Joshua Feuerstein, a Oneness Pentecostal preacher and founder of America’s Church, told a crowd of more than 1,000 worshipers on Friday.

“He’s not done with this country.”

The three-day Christian Nationalist event being held at the Frisco Convention Center, north of Dallas, was part tent revival, part megachurch extravaganza and part political rally. It began with a video promoting a conservative online pharmacy and a word from the head of a pro-Trump, conservative Christian insurance company who said he refuses to wear a mask and offered audience members a chance to win a new AR-15 rifle if they texted their number to his company.

“You come to worship Jesus and leave with a gun,” he told worshipers. “Amen.”

After the commercials, a megachurch-style service began, with recording artist Draylin Young leading the congregation through songs like “How Great is Our God,” “You are Good,” and “Reckless Love,” while on a stage flanked by a pair of giant America flags.

Christian Nationalism — the idea that being a Christian is an essential part of America’s identity and destiny — was on full display.

The words “America’s Revival” were projected on a screen behind the band, with an American flag waving in the background. At center stage was a pulpit resembling a presidential podium, with a seal of the United States on the front. The pulpit sat on a carpet that featured the same color scheme and seal found in the Oval Office.

Featured preaches Feuerstein and Greg Locke of Global Vision Bible Church in Tennessee, filled their sermons with a mix of patriotism and piety, with callouts to Donald Trump and claims faith was more powerful than COVID-19.

In his sermon, Feuerstein told the biblical story of King Ahab and Jezebel and how they faced off against the prophet Elijah. He described Ahab as a senile old man and Jezebel as someone who “slept her way to the top.”

“Does that sound familiar?” he said, leading to raucous cheers from worshipers. A number of conservative pastors have referred to Vice President Kamala Harris as a “Jezebel” — a term used for an evil or corrupt woman.

The biggest name at Friday’s event was MyPillow.com CEO and election conspiracy theorist, Mike Lindell, who gave a rambling speech about how God saved him from a cocaine addiction and detailed how he “fully surrendered his life to Jesus” after meeting Trump.

He joked that his friends called him saying, “Who is that crackhead up there?” after Lindell was photographed in the White House with Trump.

Lindell then listed what he called a series of miracles that allowed him to uncover how the 2020 election was stolen from President Trump. He promised to reveal more evidence about the election in an upcoming “cyber-symposium” to be broadcast on his new website, Frankspeech.com.

The symposium is the latest election conspiracy project from Lindell, who told supporters the 2020 election would soon be overturned and Trump would return to the White House. He then promised the voting machines would be “melted down and turned into prison bars.”

Lindell told worshipers they should not fear because “God’s got his hands in all of this.”

“This is going to be the greatest uniting of our country ever and the biggest revival for Jesus in history,” he said.

His remarks were greeted with waving flags and cheers of “U.S.A! U.S.A!”

Feuerstein told worshipers he wanted to hold an even bigger event in the future at the stadium used by the NFL’s Dallas Cowboys, where the former president would be the primary preacher.

Before the worship started, a group of women in white dresses with single red letters posed in front of one of the giant American flags, spelling out the message “TRUMP WON.”  Outside the main exhibit hall was a pair of Trump stores, selling merchandise with pro-Trump, pro-God messages.

There was also a booth for PatriotChurches.us, staffed by a retired Army colonel turned software salesman, and a display for MoreKingdom.com — a Pentecostal T-shirt company with slogans like “More Lord,” “Mas Señor” and “Make America Godly Again.”

Landon Zilbert, who designed a number of the T-shirts, said he was more interested in spiritual renewal in America than political power. The group’s T-shirts are meant to promote conversations about Jesus he said — and staff at the booth offered to pray for customers during the event.

“We’d rather do that than sell a T-shirt,” he said.

Zilbert did say he supported Trump because the former president’s values lined up with his own. He was concerned freedom to worship was being constrained in the United States, especially during the era of COVID.

Perhaps the biggest reaction during Friday’s revival came during the sermon given by Locke, a fire-breathing Tennessee preacher known for his pugnacious social media presence and his proclivity for creating sound-byte-driven controversy with his sermons.

Locke, a Trump defender and COVID-denier, recently told worshipers at his church that anyone who wore a mask would be kicked out of services.

During his sermon, Locke recounted his run-ins with public officials and reporters during the COVID-19 pandemic. His church has continued to meet, holding services in a tent.

He said his church was both “biblical and constitutional.”

Locke also called worshipers to spiritual renewal, saying they needed to spend more time reading their Bibles and praying. He broke down in tears at times, saying he’d begun to learn more about being close to God in recent months.

He also issued a warning, while standing in front of the projection of a waving flag.

The church in America, he said, “was too much America and not enough church.”

Friday’s service ended with an altar call, as Joshua Feuerstein of America’s Church invited worshipers to come forward and give their lives fully to Jesus. Organizers had set up horse trough-style steel baptistries out in the parking lot — along with pop-up changing rooms — for those who wanted to get baptized.

If one person gave their life to Jesus during the event, Feuerstein said, “This will all be worth it.” 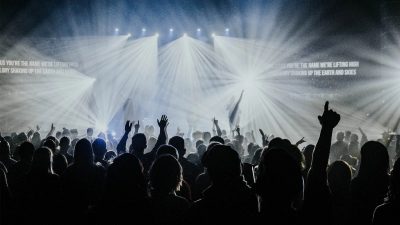 The most popular worship song in churches these days is “Build My Life,” from Bethel Music, the megachurch-based worship music hit machine 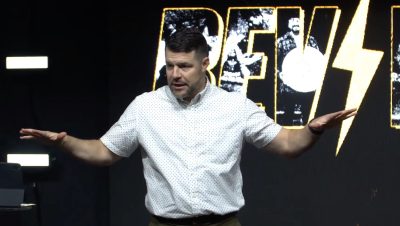 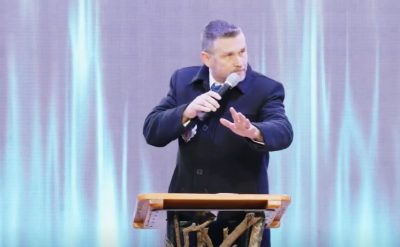