RZIM President Apologizes for His Role in Sex Abuse Scandal

I recognize with great sorrow that for many of you silence was not a choice. I completely trusted various deceptive narratives and accounts. And I was wrong. I realized that in passing on those false accounts to others, and in speaking in (Zacharias’) defense, I have greatly multiplied the pain, the hurt and the damage that’s been felt and experienced by many.

Ramsden noted that many of Zacharias’ victims “decided to remain anonymous,” but added: “We know that you are real people with real names, and that real damage has been inflicted both on you and your families.”

Ramsden is the third RZIM executive to publicly apologize for the RZIM scandal. In May, RZIM CEO Sarah Davis, Ravi Zacharias’ daughter, posted an apology video. Similarly, RZIM Senior Vice President Abdu Murray appeared in a podcast in May with Sean and Josh McDowell and apologized for defending Zacharias and discrediting his victims.

All three executives—Davis, Murray, and Ramsden—appear to still be employed by RZIM.

As Davis did in May, Ramsden mentioned an external investigation into RZIM’s culture, policies, and practices that was commissioned by the ministry in February. Yet also like Davis, Ramsden gave no update on the investigation, nor did he state whether the investigation’s findings would be published or when.

In the video, Ramsden specifically apologized for failing to respect and listen to Lori Anne Thompson—a victim of a Zacharias’ abuse and predatory behavior, which was first reported in 2017.

“(I)n doing this, I failed not only her, but also her husband Brad, her family, and those who spoke up for her,” he stated.

Ramsden also acknowledged his own “pride” and confessed that he had “failed to recognize (his) own weaknesses.”

“I was convinced that Ravi Zacharias was trustworthy when it came to the issues of his sexual conduct and behavior,” Ramsden said. “As a matter of fact, I believed him to be very naive when it came to these areas. I now realize that I was the one who was being naive.”

Ramsden also said that he “failed to consider the effects of my admiration for (Zacharias), and the approval I sought from him. I allowed the good that I saw in him publicly and privately, when we were together, to dictate my conclusions as to whether he was innocent or guilty.”

Ramsden also specifically apologized to the RZIM team he led, saying he sometimes reacted “with frustration and disappointment” at the length of the investigative process into Zacharias’ misdeeds. Ramsden said he recognizes “that this would have been deeply distressing. And I’m so sorry for this.”

Ramsden affirmed that RZIM needs to “make restitution,” but did not explain what that might entail.

The response to Ramsden’s video has been mixed.

Many on his twitter thread expressed thanks for the apology. One man retweeted Ramsden’s tweet, stating: “I think this takes guts. There’s no easy way to respond to all the wrongs inflicted other than repentance & restitution.”

I think this takes guts. There's no easy way to respond to all wrongs inflicted other than repentance & restitution. I am sure we'll all want to keep praying for the many fine men & women in the team, even as they respond to the some of the wrongs they may have helped perpetrate https://t.co/jNGywad0IY

However, Shirley Steward, a Canadian who says Zacharias pressured her to get an abortion, says no one from RZIM in the U.S. has reached out to her since she went public with her story five months ago. She says only Alanzo Paul, a former apologist with RZIM Canada, has made any effort.

“SOME prefer to remain anonymous (Not ‘nameless’),” Steward tweeted to Ramsden. “Yet you only name one. Least sincere attempt at an apology that I’ve heard to date.”

SOME prefer to remain anonymous. (Not 'nameless') Not all. Yet you only name one. Least sincere attempt at an apology that I've heard to date.

Similarly, Vicki Blue, a former co-owner of a spa with Zacharias and a victim of his, who also went public with her story, tweeted: “We get forgotten a lot! All I can hope for is actions speaking louder than words.”

The one victim who was named by Ramsden, Lori Anne Thompson, said she accepts Ramsden’s apology, which he sent to her personally in May. Yet she acknowledged that the questions concerning the victims and others hurt by Ramsden and RZIM are legitimate and hopes answers “will be forthcoming.”

Ruth Malhotra, the former RZIM spokesperson who said she was bullied by Ramsden and other senior RZIM staff for questioning Zacharias, has been silent since Ramsden’s video published.

However, following Murray’s podcast in May, she tweeted an extensive thread, noting that Murray and others had not owned or apologized for the way they’d treated her and other staff.

Ramsden makes no mention of Malhotra in his video.

Someone else who’s been critical of apologies by RZIM executives is former RZIM director, Carson Weitnauer. In a tweet today, Weitnauer acknowledged that he had been in a separation dispute with RZIM due to his refusal to sign a non-disclosure agreement. Weitnauer said the dispute has been resolved, but only after a “protracted and painful” legal process. (Earlier, Weitnauer told The Roys Report that Sarah Davis had stated on March 10 that RZIM would no longer require NDAs from staff to receive severance.)

Weitnauer also tweeted that while he appreciates the apologies from RZIM leaders, “it remains incredibly disappointing” that these leaders remain committed to “keeping their jobs and privileges” at RZIM. Weitnauer added that it’s “inexplicable” that leaders like Ramsden, Murray, and others “can admit to such egregious failures . . . and not experience any accountability.”

Weitnauer said the “honorable decision” would be for RZIM senior leaders and its board to resign.

It is inexplicable that they can admit to such egregious failures – that harmed so many women – and led a toxic organization that retaliated against anyone who stood up for victims – and not experience any accountability.

The Roys Report reached out to RZIM for comment, but did not immediately hear back.

*This article has been updated. 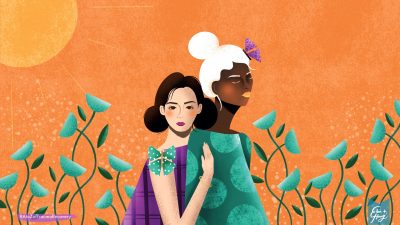 Artists, Abuse Survivors Collaborate on ‘A to Z of Trauma Recovery’ Art Project

An award-winning designer and illustrator is bringing together diverse artists and abuse survivors to foster recovery from trauma through experiencing art. “Healing