The faculty of Seattle Pacific University, a Christian school associated with the Free Methodist Church, has taken a vote of no confidence in its board of trustees after members of the board declined to change its policy prohibiting the hiring of LGBTQ people.

The no-confidence vote, approved by 72% of the faculty, was the latest in a series of escalating clashes between faculty, students and the school’s governing board. Faculty and students also want the school to drop its statement on human sexuality, which declares marriage between a man and a woman as the only permitted expression of human sexuality. Of the 213 who voted, 153 faculty voted for the motion, 47 were opposed, and 13 abstained.

The board of trustees issued a statement last week saying it would not change its employment hiring policy, which excludes LGBTQ people from full-time positions. It has not yet responded to the no-confidence vote.

“The board recognizes that fellow Christians and other community members disagree in good faith on issues relating to human sexuality, and that these convictions are deeply and sincerely held,” the board chair, Cedric Davis, said in an April 12 statement. “We pray that as we live within the tension of this issue, we can be in dialogue with the SPU community.”

The board also indicated it was taking its stand because it wanted to continue to maintain its ties to the Free Methodist Church, a small denomination of about 70,000 in the United States and one million around the world. The Free Methodist Church has eight affiliated educational institutions, including Azusa Pacific, Spring Arbor, and Greenville universities.

“Right now the board is the last remaining group that has not yet come to recognize that LGBTQ individuals can be faithful Christians, and as faculty and staff they would play positive roles on our campus, if we can hire them,” said Kevin Neuhouser, a professor of sociology at Seattle Pacific who is also the faculty adviser for Haven, the student club for LGBTQ students on campus.

Neuhouser said the school was engaged in a larger discussion of trying to discern what it means to follow Jesus. “Is it being faithful to include or exclude?” he asked.

The most recent conflict began in January when an adjunct nursing professor filed a lawsuit accusing the university of refusing him job opportunities because of his sexual orientation.

Jéaux Rinedahl alleged in the lawsuit that when he applied for a full-time, tenured position as an associate nursing professor, Seattle Pacific rejected his application because he’s gay.

The status of LGBTQ faculty and students at Christian colleges and universities has been roiling many campuses.

One of the 33 students named in the suit is a trans man who attended Seattle Pacific, where he said he was harassed, humiliated and forced to sign a statement saying he knew he was “breaking lifestyle expectations.”

Jeff Walton, an alumnus of Seattle Pacific (’01) and communications manager with the conservative Institute on Religion and Democracy, said the vote today has been a long time in coming.

“Unofficial groups like Haven openly advocated for years that the school abandon lifestyle expectations on sexual conduct,” Walton said. “Pro-LGBT groups like Soulforce were allowed to organize their own events on campus with no contrary message from the school.”

Walton added that the school’s administration has spent years cultivating relationships with the local business community with the express aim of “engaging the culture, changing the world.” Yet he said “there is more conformity to the culture.  The school faces a choice about if it will be distinctively Christian or not.”

In 2015, two Mennonite schools, Eastern Mennonite University and Goshen College, announced they were updating their nondiscrimination policies to allow the hiring of married gay and lesbian faculty. They also withdrew from the Council for Christian Colleges & Universities, though they maintain their Christian identity.

Last week, about 200 students held a vigil on campus to mourn what they called discriminatory practices toward LGBTQ people and to outline a series of demands.

Leah Duff, a 21-year-old senior at Seattle Pacific who considers herself queer, said she was disappointed in the board decisions and determined to continue to fight against the board and what she described as its discriminatory policies.

“It’s a smack in the face to have this reiterated that you want to take my money but I can’t be gay,” she said.

Duff said the students and alumni are planning a campaign to discourage donations to the school, cut its ties to community organizations and work to decrease enrollment at the school.

The school does not require students to sign a sexuality statement.

The story has been updated. 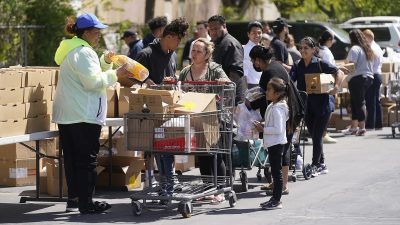 At the Seven Loaves Food Pantry at St. Andrew’s United Methodist Church in Plano, Texas, volunteers have been serving 800 to 1,200

Students from Seattle Pacific University, a Christian school associated with the Free Methodist Church, have ended their more than month-long sit-in protesting