At one time, three members of the Stowell family worked at James MacDonald’s Chicago-area mega-church, Harvest Bible Chapel. Joe Stowell, Sr., President of Cornerstone University and former President of the Moody Bible Institute, served as a teaching pastor there. His son, Joe Stowell, Jr., served as an executive pastor. And Matt Stowell served as a worship pastor. Then, during a six-month period in 2008, all three Stowells left Harvest quietly. None have ever spoken publicly about their experience at Harvest—until now. Today, Matt Stowell posted the following on Facebook, which I am reposting with his permission:

With all of the activity surrounding Julie Roys’ recent World Magazine article and subsequent blog posts, many people have been asking me what I think about it. Inspired by my friend Lindsay Mattingly‘s brave post (see below) and Scot X. McKnights recent blog post about pastoral power abuses, I feel compelled to share some of my personal thoughts and observations.

I served at Harvest Bible Chapel during very formative years of my life and ministry. I was 23 when I became the Junior High Youth Pastor. At that point, I believe the church had around 1800 people attending weekly services, and only one campus in Rolling Meadows. Over the next ten years, the church grew quickly and my role evolved into that of Worship Pastor. I began overseeing worship and production across the then four campuses. We started Harvest Songs (now Vertical Worship) in the hopes of capturing the stories of God at work in our church, spent countless hours planning services, and went on many trips for Walk In the Word, church events and the Downpour Lifeway tour.

I spent significant amounts of time personally with James in many different settings. Some of those hours were good and we had some amazing times serving together. I was always grateful that James chose to take a bet on this young punk that barely knew how to play guitar and helped me eventually become his main worship pastor and leader. However, as my time at Harvest went on, things began to become more toxic. I eventually found it increasingly difficult to reconcile the person who James was on the stage and the James I came to know in real life.

“I felt like the mental cost of reconciling all that was happening was bankrupting my soul, and that it was increasingly difficult for me to share the stage with James.”

During those days, I would often tell my wife, Debbie, that I felt like the mental cost of reconciling all that was happening was bankrupting my soul, and that it was increasingly difficult for me to share the stage with James. That might sound extreme or unfair to some, but I was routinely beginning to witness James engaging in off-stage behavior that included brutal outbursts of anger, an incessant need to “win” at all costs, berating and belittling people, cruelly joking about others, and deceptively spinning truth for his own gain. Over time, the pervasive “only one voice really matters” culture of Harvest became one in which fear – more than love, or humility, or any of the other fruits of the spirit– was a daily, palpable reality. Specifically, this fear manifested itself in the form of an ever-present anxiety over what James might think, say about you, or do if you disappointed him or were perceived to have gone against him in any way.

It may seem unfair of me to share about this now, but that’s kind of my point – I was part of the problem. Looking back, I’ve come to see how I helped, often through my silent deference, to build and normalize a culture of unholy pragmatism at Harvest in which the pervading attitude began to be one best summed up in rationalizing conversations among co-workers like ‘Sure, all of these terrible things are happening behind the scenes, but look what God is doing! The seats are filled! People are being baptized! Lives are being changed! Clearly, James is an anointed, gifted preacher!’

As a follower of Jesus, I certainly celebrated all of these good things as they were happening. Both personally and professionally, I very much wanted this version of Harvest Bible Chapel to be the only reality. The problem was, it wasn’t. In actuality, the reality was always rooted in a rationalization, where outcomes trumped character.

I think that most of us felt that Harvest was the biggest thing, humanly speaking, that we would all ever be a part of – traveling to cool places; being invited to speak at conferences full of people who actually wanted to really listen to you; hobnobbing with famous people; making six figures as a 32-year-old worship leader… these are all things that are understandably hard to want to give up. They’re the kinds of things that condition you to not rock the boat. Who would be crazy enough to purposely flush an incredibly prosperous career or dare to try and go against the powerful, unspoken Christian cultural ethic of never “speaking poorly” about your church or pastor? It was hard to envision a situation where I could actually confront James without fear of where it might lead. If there was ever a sense that you were out on James, you would soon find yourself literally out.

Nonetheless, the strain of trying to justify the dual realities of my experience eventually became more than I could bare. So I left in the spring of 2008. When I left, I said nothing publicly about what was really going on. I did my best to slip out with a smile. My thinking was that I didn’t want to hurt the church, cause division, or derail the good things that were happening.

“Who would be crazy enough to purposely flush an incredibly prosperous career or dare to try and go against the powerful, unspoken Christian cultural ethic of never ‘speaking poorly’ about your church or pastor? It was hard to envision a situation where I could actually confront James without fear of where it might lead.”

I have wrestled with this decision for years. Should I have said something? Should I have sounded an alarm? Even four years ago, when I met with James in an attempt to discuss the past, I chose to say little. I think at the time of that meeting I genuinely thought I had healed and moved on; knowing the truth that Harvest wasn’t God’s only church, and James wasn’t Jesus. This might seem like a pretty obvious notion, but it can be a surprisingly difficult idea to sort out when you have been in a spiritually abusive situation that messes with your faith.

So here’s the deal: I haven’t worked at Harvest Bible Chapel for 10 years, so if you want to dismiss all of what I’ve said as the disgruntled ramblings of an old employee who just can’t seem to “let it go,” that’s your choice. But I have certainly found it hard over the years since to hear about the pain James’ past and present choices have caused to so many people that I care about. I am saddened that the patterns I experienced years ago seem to be consistent with the current lawsuits and accusations.

My only encouragement and advice for those that are in the middle of all of this is to consider Paul’s list of the fruits of the Spirit – the marks of a true follower of Christ: love, joy, peace, patience, kindness, goodness, gentleness, faithfulness and self control. (Gal 5:22-23) If you can’t honestly see a growing abundance in all of these things in James, yourself, or the current culture of the church… Speak up! Do something about it! Something is wrong. Resist the temptation to be afraid of of the outcomes. Start by doing what you can and be brave.

Of course, in all of this I suppose I’m telling myself what I wish I would have considered during my time at Harvest. As I look back on the arc of my faith walk and pastoral experience, I see I spent my formative years of learning “how to do ministry” from a set of values that were unhealthy and dangerous. I’m grieved to know that something I was a part of building as a young pastor, operating under those values, seems to still persist and I pray for the sake of the gospel that we can have thoughtful conversations about the power structures at work in our churches. 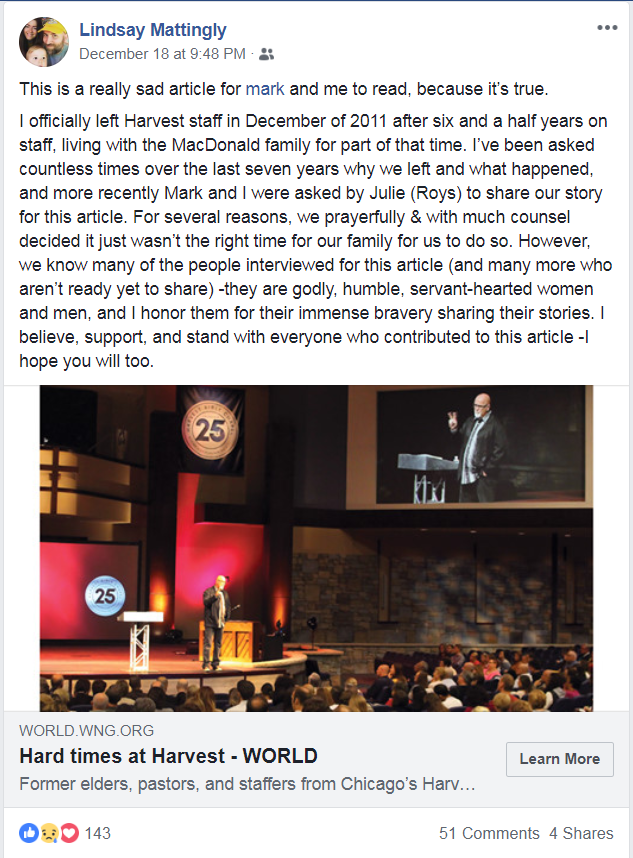