Black and Latino Christians often turn to their pastors for mental health care, even when those clergy have limited expertise in working with those who are mentally struggling, according to a new study by the Religion and Public Life Program at Rice University.

Daniel Bolger, a doctoral candidate at Rice University who co-authored the report, says pastors, whether they want to be or not, “are on the front lines of this mental health crisis.”

Bolger said that mental health and medical providers have an opportunity to help clergy and congregants alike by creating networks with pastors and working with local religious communities.

“A persistent theme across the clergy members we talked to was that there’s a level of need for mental health care they’re just unable to meet,” said Bolger. “Maybe it was less about the types of issues they were seeing, but more the sheer number of people who needed that type of assistance.”

To Bolger, pastors are in need of support, especially as the COVID-19 pandemic wears on, citing research showing the number of pastors who have contemplated quitting ministry. “They were feeling really overwhelmed by this before the pandemic, so we can only imagine how much worse it might be during the pandemic,” he said.

For the study, co-authored by Pamela Prickett at the University of Amsterdam, the researchers held focus groups in 2015 and 2016 with 14 Black and Latino pastors from different Protestant denominations and conducted 20 interviews with church members across two congregations in Houston, Texas. Church members were between 24 and 65 years old. More than half had completed a Bachelor’s degree and 63% were women.

The Black American congregation chosen for the study was a Baptist church, with a weekly attendance of about 600 members. The Latino congregation, a Pentecostal church, had about 70 weekly attendees.

The two groups, their research showed, seek their pastors out for very different reasons.

Black congregants who participated in the study preferred to bring their difficulties to clergy because of stigma surrounding mental health issues in the broader racial and ethnic community. Latinos, meanwhile, “relied on pastoral care due to norms in their individual congregation.” The report’s authors noted that the Latinos studied ”often attribute mental health concerns to spiritual factors.”

Differences between how Black and Latino Christians in the study made decisions about mental health care suggest initiatives should “be tailored to different populations based on prevailing norms,” the report’s authors wrote.

Bolger also noted that Latino congregants studied talked about mental health at church only in the past tense, “when someone has been healed, when someone has overcome mental illness.”

Regardless, the pastor was seen as having a special “pull” among both Black and Latino Christians “to best craft a plan of care for individuals facing mental health challenges,” according to the study.

Bolger said that pastors were open to partnering with health providers and having them talk to their congregants about mental health. They’re just lacking time and resources to be able to do so, Bolger said.

“Pastors didn’t see things like necessarily even prayer or their own pastoral care as sufficient to meet the needs of all their congregants that were struggling with mental health,” Bolger said.

He recalled a Latino pastor acknowledging that “sometimes I pray for them and that really helps and they get better, but sometimes I pray and they don’t.” This led the pastor to pursue a master’s in counseling, Bolger said.

Bolger added that it’s necessary for mental health practitioners to reach out to these faith communities, because “churches can be a great entryway to reach populations that might not otherwise get sufficient care.” 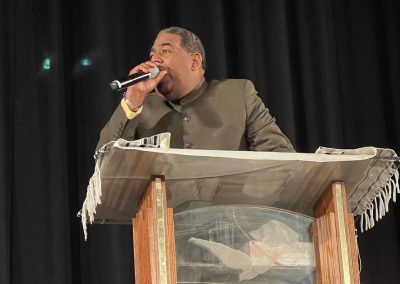