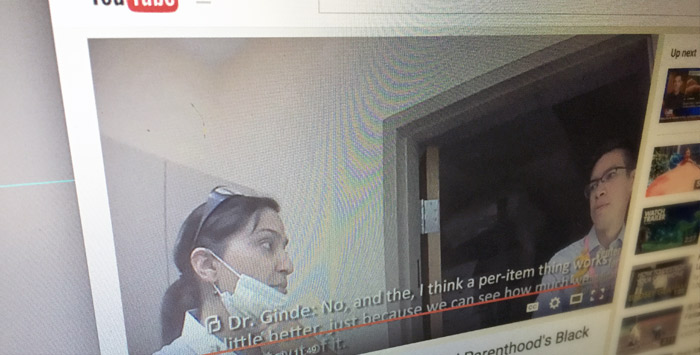 “No and the, I think a per-item thing works a little better,” Ginde replies, “just because we can see how much we can get out of it.”

We’ve been “using them over 10 years,” Sheehan said. “We just kind of renegotiated the contracts. They’re doing the big collection for government level collections and things like that.” The actor replies, “So, I don’t want to sound like a salesman here, but I’m going to. So, we return a portion of our fees to the clinic.” “Oh!… all right.” Sheehan replies.

Also featured in the third video is Holly O’Donnell, an Ex-Procurement Technician with Stem Express, a medical lab that buys fetal specimens from Planned Parenthood. “I thought I was going to be just drawing blood,” O’Donnell says, “not procuring tissue from aborted fetuses. . . . They don’t even let you know in the interview what you’re doing.”

O’Donnell explains in detail her revulsion when she realized what her job would entail on her first day of work. She said fetal tissue was poured out onto a pie dish and technicians were required to separate the fetal tissue from the vaginal tissue. “Okay, this is the head, this is an arm, this is a leg,” O’Donnell recounts. “I remember grabbing the leg and I said, ‘This is a leg.’ And the moment I picked it up, I could just feel like death and pain . . . shoot up through my body and I started to – I blacked out basically.” O’Donnell recalls waking up in the recovery room and the other technicians saying, “Oh, you’re new, huh? Don’t worry. It still happens to a bunch of us.”

The third video also includes a detailed list of prices Advanced Bioscience Resources offers for baby body parts. The fees for fetal cadavers range between $340 for a second trimester specimen and $550 for a first trimester specimen. Full-term umbilical cords go for $550.   The video also shows a picture of a baby and the price its various parts will secure for the Planned Parenthood clinics. Fees for the abortion are estimated at $500; fees for body parts are $300.

Below is more of the actual dialogue in the third video mentioned previously between Dr. Savita Ginde and a fetal tissue buyer:

Ginde: “Now, would you call that intact?” (referencing a body part on the table)
Buyer: “These are intact kidneys, yes. If somebody needed… ”
Ginde: “Because if I looked at that, I’d be like that’s good to go.”
Buyer: “Oh ya, ya.”
Medical assistant: “Five stars!”
Buyer: “Yeah, I mean you could start a neural cell culture from this neural tissue right here.”
Ginde: “Would someone want that?”
Buyer: “This?”
Ginde: “Yeah. Any of this.”
Buyer: “Yeah! Oh yeah, someone would. This is definitely –
Ginde:   “So, even at 11 weeks, even though it’s really early, because I know we have talked about 2nd tri(mester).
Buyer: “This is neural tissue that people could take. And look, and you see how it’s still connected through the spinal cord back there –
Ginde: “So we just send that all together?”
Buyer: “You could actually, yeah. Some people prefer that actually because it keeps it a little more protected.” (edit)
Buyer: “That 11.6 (11 weeks, 6 days old aborted baby) was pretty good. There was like three or four samples we could have taken out of the 11.6.”
Dr. Ginde: “Excellent.”
Buyer: “If we were doing like $50 to $75 per specimen, that’d be like $200 to $300 (total), and we’d be comfortable with that. But stuff like this, we don’t want to be like just a flat fee of like $200, and then , it’s like…”
Ginde: “No and the, I think a per-item thing works a little better, just because we can see how much we can get out of it.”