The UK arm of RZIM, called the Zacharias Trust, today announced it is separating from Ravi Zacharias International Ministries (RZIM) due to RZIM’s alleged inadequate response to “systemic failings” within the organization.

In a statement posted to its website, the UK Board of the Zacharias Trust said RZIM’s response yesterday to the results of a third-party investigation of abuse by RZIM Founder Ravi Zacharias “does not go nearly far enough in terms of actions relating to leadership and governance.”

The UK Board said it appreciated RZIM’s “focus on the victims, its repentance and its intention to make amends.” But the board added:

Very serious issues and systemic failings have been raised in recent months and confirmed by the Miller & Martin report. These demand accountability and urgent action beyond the measures outlined in the RZIM US statement.

The UK Board has therefore taken the unanimous decision to make a clear separation from the global RZIM organization.

Though historically linked to RZIM, the Zacharias Trust functions as a separate charity in the UK with independent trustees. Unlike the RZIM board, whose members are secret, the UK Board has six members, all of whom are listed at its website.

The Miller & Martin report, which was released yesterday, found evidence that Ravi Zacharias had raped one of the female massage therapists who had treated him and sexually abused others.

It also found that RZIM funds had been used to pay Zacharias’s victims, who then felt indebted to him. Additionally, it found “significant evidence” supporting Lori Anne Thompson’s 2017 allegations that Zacharias had lured her into a sexting relationship and exploited her.

Though the report “did not find evidence that anyone within RZIM or on its board knew that Mr. Zacharias had engaged in sexual misconduct,” it documented several major failings by the RZIM board and top employees.

In addition to allowing misuse of donor funds, the report said RZIM also punished several employees who expressed concerns about Zacharias traveling with a masseuse or spending weeks alone in Asia. The report also noted that RZIM did not investigate the allegations raised by Lori Anne Thompson in 2017, but simply believed Zacharias’ narrative.

Independent of the report, other RZIM employees have also reported shameful actions by RZIM’s board and executives.

According to a report yesterday in Christianity Today, RZIM insiders claim that RZIM Vice President Abdu Murray suggested this fall that the ministry enlist a “rough” ex-cop to find and discredit Zacharias’s accusers.

Baker-Hytch also says Ramsden claimed that “no money had changed hands” between Zacharias and the Thompsons. However, Baker-Hytch said he later learned that Zacharias had paid the Thompsons $250,000 as part of a 2017 settlement, which included a non-disclosure agreement.

Sam Allberry, a global speaker with RZIM, yesterday tweeted: “The RZIM Board says that they need to repent in this. That is true. The first step should be by telling us who they are.”

The RZIM Board says that they need to repent in this. That is true. The first step should be by telling us who they are. https://t.co/Cw83BnEACm

According to the UK Board, Allberry is one of several leading speakers historically associated with OCCA who have “indicated their strong support for the decisions being taken by the UK Board as well as their willingness to consider supporting a new ministry organization.”

Max Baker-Hytch praised the UK Board’s action in a statement to The Roys Report.

“I wholeheartedly welcome this statement by the U.K. board, and the way it acknowledges not just the direct victims of Ravi’s abuse but also those within the organization who have come under pressure for expressing doubts about Ravi over the years,” he said. “The U.K. board have been pushing for transparency and fundamental reforms in governance for months, and as the U.K. statement indicates, the US organization needs to go much further in order to turn words of repentance into actions.”

Carson Weitnauer, a former RZIM director who resigned his position recently, tweeted yesterday that the board and senior leadership of RZIM need to resign. “That is the minimum action needed to start to demonstrate repentance,” Weitnauer said.

This is really simple: the board and senior leadership of @RZIMhq must resign.

That is the minimum action needed to start to demonstrate repentance.

This is part of the consequence for completely failing to hold @RaviZacharias accountable for such egregious sin.

The UK board says that the Zacharias Trust will “operate without any link to RZIM US.” The organization also will be changing its name.

“This process will take time to complete but the UK Board is convinced that this is the best and only way to ensure that the ministry can continue to serve the UK church with integrity,” the board said. “This will also give us the opportunity to review the lessons to be learned from these awful events.”

CORRECTION: This article has been updated to show that Margie Zacharias has resigned from RZIM’s board. 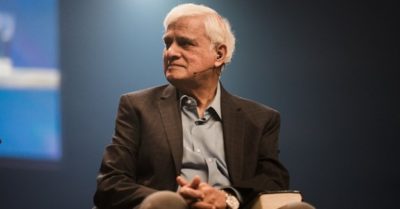