A scandal-plagued fundamentalist boarding school in Missouri is facing renewed criticism after video surfaced allegedly showing “clear abuse” by a leader at the school.

The video was posted Sunday by Robert Bucklin, who says he survived physical and sexual abuse at Agape Boarding School near Stockton. Bucklin wrote the video shows a staff member “kicking and dragging a young boy.”

Just for context, this is the Pastor of Agape Boarding School

He is literally kicking and dragging a young boy

This is Christian love in Missouri for you

Bucklin told The Roys Report the video is from about 1999 and the staff member shown is Frank Burton. The Kansas City Star reported that other former students also identified Burton, who was reportedly principal at the time.

Burton is co-pastor at Agape Baptist Church, which runs the school. Agape Baptist is an Independent Fundamental Baptist church founded in 1990 by its current pastor, James Clemensen, according to the church website.

TRR left a message with the school’s director seeking comment, but has not heard back. We also emailed MACS but didn’t get a response.

And the video is just the latest in a mountain of accusations against Agape Boarding School. Several employees have been charged with felonies, and Agape is also facing numerous lawsuits alleging a host of abuses, including starvation.

Bucklin, who is among those suing the school, said he attended the school for about six years beginning in 2007. He told TRR the video is just a sample of what he and other students endured at the “home of horrors.”

Bucklin said a staffer once “wrapped a cord around my neck, and other students and staff had to come and get him off of me” because he couldn’t breathe. The school didn’t notify law enforcement, Bucklin said.

“It was a nightmare,” Bucklin added.

An investigation by the Missouri State Highway Patrol last year led the state’s attorney general to recommend charges against 22 employees based on the testimony of 36 victims, the AP reported.

However, the county prosecutor actually pursued far fewer charges. Five of the boarding school’s employees were arrested last year on felony assault charges, the Associated Press reported at the time.

Bucklin told TRR he wants the state to shut Agape Boarding School down, but “nobody’s done that.”

The prosecutor, Ty Gaither, acknowledged to a state agency that Missouri officials have the authority to remove students from the school if their immediate health or safety is threatened.

TRR tried to call Gaither’s office but no one picked up the phone. Gaither didn’t immediately respond to an email requesting comment.

Gaither’s document also mentions the boarding school’s physician, David Smock, who is set to be tried on child sex abuse charges in two counties. Smock worked at the clinic where he is a patient, Gaither stated in the document, so Gaither referred the case to an outside prosecutor.

But Bucklin said he believes Gaither should have removed himself from all cases surrounding Agape Boarding School.

Gaither states in the document that he doesn’t have any personal or business ties to the boarding school’s owners or staff.

Three of the five former boarding school employees who were charged were still employed at Agape as of this past March, the Star reported. It was unclear whether any of the 17 who weren’t charged still worked there.

Preliminary hearings for four of the five charged are set for this summer, local media reported.

Among other agencies, Agape Boarding School is accredited through the Missouri Association of Christian Schools and Childcare Agencies, according to the association’s website. 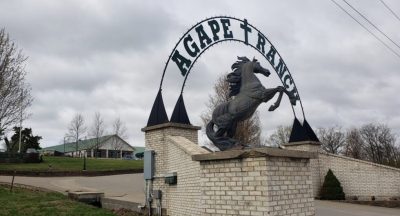