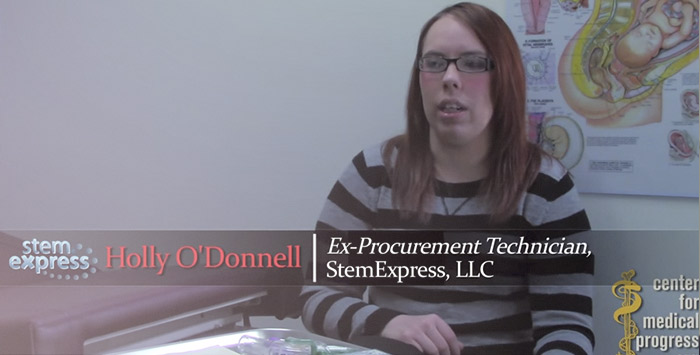 A sixth video released today by The Center for Medical Progress alleges that Planned Parenthood harvests and sells baby body parts without a mother’s consent. The video features Holly O’Donnell, a licensed phlebotomist who worked for StemExpress for six months in 2012. StemExpress is a company that buys fetal tissue from Planned Parenthood and then sells it to medical research labs.

“The coworkers I had . . . they would not consent the donors,” O’Donnell said. “If there was a higher gestation and the technicians needed it, there were times where they would just take what they want. And, these mothers don’t know, and there’s no way they would know.”

O’Donnell’s job included going to Planned Parenthood clinics and getting the specific fetal tissue that StemExpress customers wanted. According to O’Donnell, Planned Parenthood gave her access to patient records so she could find women who met her criteria. Clinics also gave her access to their abortion schedule, so she could plan for days when the fetal tissue supply would be the greatest.

O’Donnell told of a specific incident at a Planned Parenthood Clinic in Fresno, California, where a woman in the later stages of her pregnancy came in for an abortion that took two days. On the first day, O’Donnell asked the woman if she would consent to donating her baby’s body parts and the woman said no. However, the next day, another worker named Jessica reportedly took the woman’s blood and her fetus without her consent.

“It’s terrifying,” O’Donnell said. “Imagine if you were an abortion patient and someone was going in and stealing your baby’s parts.”

The incentive for this theft, according to O’Donnell, is money, even though selling fetal body parts is illegal. “For whatever we could procure, (Planned Parenthood) would get a certain percentage. The main nurse was always trying to make sure we got our specimens. No one else really cared, but the main nurse did because she knew that Planned Parenthood was getting compensated.”

Completely neglected in this buying and selling of baby body parts, according to O’Donnell, is the welfare of patients. “The women I worked for were cold, just cold. They don’t care. They just wanted their money.”

“I’m not going to tell a girl to kill her baby just so I can get money,” O’Donnell said. “And, that’s what this company does.”

This latest video comes just a week after the U.S. Senate defeated a bill that would have eliminated federal funding for Planned Parenthood. Other videos by The Center for Medical Progress (CMP) have indicated that Planned Parenthood sells “intact fetuses,” suggesting that babies are born alive and then killed. CMP reportedly has video of top executives at StemExpress discussing how it secures these “intact fetuses.” However, CMP cannot release that video because of a temporary restraining order granted by a Los Angeles County Superior Court.