Video: Why the Body Matters

We live in a society that says what we do with our body doesn’t matter. The body is just an organism with no inherent value or worth. And it’s separate from your true person or true essence—your mind, emotions, and will. So, if you decide to use your body to participate recreationally in sexual relationships, there’s no lasting harm to you or the people with whom you’re sexually involved.

Or, should you decide to have an abortion, it’s not murder; it’s simply killing an unborn body, not a person.  The same is true with killing an older man or woman who’s lost his or her cognitive ability. Since these people have lost their intelligence, and in some cases conscious awareness, they’re no longer persons. They’re just bodies that can be ethically and humanely eliminated.

This idea, known in academic circles as personhood theory, is also prevalent in the LGBTQ community. If you inwardly feel like you’re a gender or sexuality that contradicts the biological sex or reproductive function of your body, LGBTQ activists say that being true to yourself means conforming your body to your mind and emotions—not vice-versa.

But what does Scripture say?

Recently, I had the opportunity to speak at Crossroads Community Church in Aurora, IL, and answer that question. Despite what culture says, the Bible tells us that our bodies have inherent worth and dignity. And they’re not disconnected from our souls. We are integrated beings. And what we do with our bodies has a profound effect on our souls.

Even more than that, though, our bodies actually have a spiritual dimension. We are made in God’s image, male and female. And if you want to know why the body is under attack today, it’s because Satan knows that if he can get us to undervalue, undermine, or destroy the right use of our bodies, he’ll destroy our ability to rightly understand God and ourselves.

Why the Body Matters:

If you’d like to hear more on this topic, please consider attending Redeeming Gender & Sexuality, a conference I’m leading on Saturday, March 7, from 9:00 a.m.—3:00 p.m., at Crossroads Community Church in Aurora, IL. The conference is free and no registration is required. Just come! For more information, click here. 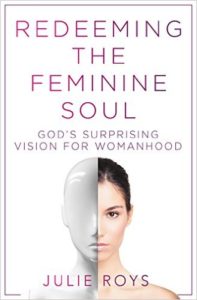 I explain a biblical understanding of gender and sexuality in more detail in my book, “Redeeming the Feminine Soul: God’s Surprising Vision for Womanhood.”