This article was originally published as an op-ed by Julie Roys in The Christian Post.

Should Christian journalists expose sin and error within the Body of Christ? Or, do such reports simply discredit Christian leaders and damage the Church’s witness?

I have been asked this question numerous times over my career. Many times, I suspect, believers would prefer that Christian journalists engage in public relations, not serious journalism. After all, isn’t our community getting pummeled enough in the secular media? Yet, investigative journalism, which once was almost non-existent in the evangelical community, has become more prevalent in recent years. In fact, about a month ago, The New York Times printed an article highlighting the “muckraking” activities of the evangelical newsmagazine World.

As the Times noted, World’s exposés have led to substantial change. For example, World’s revelation that filmmaker and scholar Dinesh D’Souza attended an overnight conference with a “woman not his wife” led D’Souza to resign as president of The King’s College. More recently, World reported that Mars Hill Church funds were used to promote a book by Pastor Mark Driscoll, which likely contributed to Driscoll’s resignation.

However, the article also noted that professional Christian journalists aren’t the only ones doing investigative journalism; bloggers are, as well. For example, blogger Warren Throckmorton regularly reported concerns about Driscoll, as well, which likely added pressure on Driscoll to resign.

As journalism continues to expand in the age of new media, no doubt more Christian bloggers and podcasters will subject Christian leaders and Christian organizations to increased public scrutiny. This could help refine and purify the church. Yet, it also will likely make Christians very uncomfortable. In my nearly eight years in Christian media, I have found that the evangelical community doggedly resists investigative journalism on its own tribe. Understandably, we hate to hear bad news about the people and organizations we love.

We also tend to misunderstand Matthew 18, which says, “If your brother sins against you, go and tell him his fault, between you and him alone.” This passage clearly applies to personal matters, but Christians often apply it to public matters, as well. With public matters, though, the biblical standard is different. For example, when Peter refused to eat with gentiles, Paul publicly confronted him. As a leader, Peter’s example had the potential to lead many astray, so public confrontation was necessary. Similarly, Jesus confronted the moneychangers openly in the temple. He made a public spectacle so he could expose everyone to the moneychangers’ error. Plus, let’s not forget that the only reason we know about these incidents is that a biblical writer reported them!

Beyond these misperceptions and sympathies, though, is something one Christian media professional dubbed the “evangelical celebrity machine.” Janet Mefferd, a talk show host on the Salem Radio Network, met the full force of this machine about a year ago when she confronted Pastor Driscoll for plagiarizing the work of Dr. Peter Jones in his book, A Call to Resurgence. Much to Mefferd’s surprise, this revelation of wrongdoing didn’t unleash a torrent of criticism aimed at Driscoll; instead, it unleashed outrage at her.

The backlash was so intense that Mefferd soon backed down and apologized for confronting Driscoll. However, Mefferd’s assistant producer, Ingrid Schlueter, resigned in protest. “All I can say,” Schlueter wrote, “is that there is an evangelical celebrity machine that is more powerful than anyone realizes.”

For months, Mefferd stayed silent about what actually happened. But, recently, she disclosed the details in a blog post. Mefferd writes that after she confronted Driscoll, Driscoll’s publisher defended Driscoll and publicly attacked her; one of Driscoll’s influential friends tried to blacklist Mefferd, telling others to avoid her show; Mefferd “got hate mail by the boatload”; and reportedly, she “couldn’t keep up with the number of inaccurate and untrue stories about her online.”

Unfortunately, Mefferd’s experience isn’t unique. I have experienced this sort of thing myself and I’ve talked to other Christian journalists who have, as well. About four years ago, I reported that a prominent evangelical college was promoting far-Left radical ideology under the guise of social justice. As a result, I was attacked both publicly and privately. However, in the end, my report produced positive change – and the college document that once promoted Marxist ideas of justice now promotes “human flourishing” as defined in Scripture.

I suppose all whistleblowers receive some censure from those they expose. As a former journalism professor once told me, “If you’re not receiving any hate mail, then you’re probably not saying anything.” But, evangelicalism is a relatively small, symbiotic community, which makes it an especially difficult environment for investigative reporting. Most of the components in our community – churches, Christian organizations, public figures and Christian media – depend on each another for survival. Plus, all of the above, except a choice few, depend on donors, as well. This interdependence can foster a beautiful network of mutually beneficial relationships and cooperation, which furthers God’s Kingdom. But, it also can foster a dysfunctional system, which silences critics and refuses to face hard truths.

When I was in secular media, we evaluated stories on the basis of whether the public had a right to know the information and whether the story was newsworthy, true and fair. Yes, we had advertisers and friends in industry and politics. But, succumbing to those interests (though I am sure it happened) was considered a supreme violation of journalistic ethics. In Christian media, however, some quite openly base decisions on how publishing a story will impact their relationship with supporters and important evangelical constituencies. When this criterion interferes with reporting the truth, Christian media is reduced to public relations. What’s worse, the best interests of the Christian community are sacrificed for peacekeeping. Rather than exposing sin and error so it can be confessed and corrected, we bury it.

Christianity Today’s former editor-in-chief David Neff once described journalism as a mirror for the community, saying “When I look in the mirror, for the sake of my health and my appearance, I need to see what’s good and what’s bad.” This is the gift journalists offer the Christian community. We reveal the blemishes and the warts so abusive pastors can be reproved; dangerous doctrines can be renounced; and questionable practices can be examined.

Granted, journalists need to do their job well: they should never report rumor, but always seek to verify information with a credible source; they should report both sides, always giving the accused a chance to answer their accusers; and, they should use anonymous sources only when absolutely necessary to protect someone’s life or livelihood. But, Proverbs 27:6 says, “Faithful are the wounds of a friend; profuse are the kisses of an enemy.” If this is the case, then journalists who report bad news are not the enemy of the Christian community; those who cover up the truth are. Christians need to keep this in mind and welcome investigative reports, not shoot those who write them. I’m convinced that as we tend less to our image and more to truthfulness, God will take care of our PR. 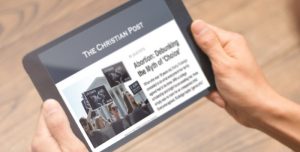 Abortion: Debunking the Myth of ‘Choice’

This article was originally published in the Christian Post. When she was 18 years old, Kathy Rutledge conceded to do what everyone