Why do people wear clothes?  This may seem a strange question.  But, as I’ve read numerous blogs about modesty recently, it strikes me that no one’s considering, let alone answering this fundamental question.
The topic of modesty is hot right now, following Jessica Rey’s provocative talk at the Q Conference on bikinis.  Rey persuasively argued that bikinis reduce women to sex objects – and urged women to dress modestly.  This didn’t sit well with Christian feminists.  To them, modesty is simply a means of blaming women for triggering men’s lust issues.  So, author and blogger Rachel Held Evans wrote: “Don’t dress for men; dress for yourself. It’s not your responsibility to please men . . . ; each man is different, so it would be a fool’s errand anyway.”
Caryn Rivendeniera, a frequent contributor to Christianity Today’s Her-meneutics blog, took it a step further.  She suggested women display their bodies to celebrate the female form.  “In bikinis,” she writes, “we declare our bodies to be enough – just as they are.  And, whether our bodies are taut or flabby, whether they’re prime or well past it, standing confidently in a bikini declares our God-crafted bodies as beautiful and good.”
This advice sounds very affirming and empowering to women.  But, if one follows it to its logical conclusion, women have no need to wear clothes at all!  After all, what celebrates the female form more than nudity?  And, given the comfort and ease of nudity, why not?
Unfortunately, we’ve forgotten that clothing is a symbol with deep spiritual significance. Yes, there was a time when we could forego clothes, but the Fall changed that.  Sin broke Adam and Eve’s relationship with God.  And, this produced profound shame and a propensity to exploit one another.  Adam and Eve tried to solve the problem by covering themselves with fig leaves.  But, in an act pointing to Christ’s eventual sacrifice and covering of our sin, God slaughtered an animal and covered Adam and Eve with its skin.  As Nancy Leigh DeMoss points out, from this point on in Scripture, “nakedness (outside of marriage) is referred to as shameful.”
You see, we wear clothes not to celebrate our bodies or to please ourselves, but to confess that we’re sinful and selfish and desperately need Christ.  Yes, clothes help men control lust.  But more importantly, they remind us that Christ’s righteousness covers all our sin and shame.
SHARE THIS: 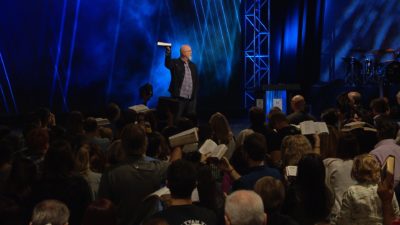 4 thoughts on “Why Wear Clothes?”