Opinion: After Falling From Grace, Televangelist Jim Bakker Is Still On The Air

“The Jim Bakker Show,” broadcast since 2003 on the new and revamped PTL Television Network, is a strange artifact of Christian televangelism. Bakker, who’s been broadcasting since the early 1970s, continues his ministry today in relative obscurity, no longer preaching about prosperity but instead about the coming apocalypse.

“The PTL Club” was once the most widely viewed religious program on television. Now, “The Jim Bakker Show” is only broadcast on Roku, DirecTV, DISH Network and on demand.

While reassuring to know his miniscule platform pivots from the most nefarious behavior of Bakker’s past, his show only serves as a disappointing reminder of what used to be the largest cultural touchpoint in Christianity.

The Bakkers have been a recurring topic of discussion in the past year when many drew connections between Jim Bakker and Jerry Falwell Jr. and alongside the film release of “The Eyes of Tammy Faye.” Starring Andrew Garfield as Jim and Jessica Chatsain as Tammy Faye, the movie centers around Tammy Faye from her first meeting with Jim through the remainder of her life — her divorce from Jim, Jim’s imprisonment, the imprisonment of her second husband Roe Messner (who worked with Jim in construction of major projects) and her battles with addiction and cancer.

Jim has also made headlines in the past year for his “COVID-19 miracle cure” called “Silver Solution” that he was marketing on his show. Credit card companies refused to allow those sales, and Jim begged viewers to send checks instead to keep him from filing bankruptcy.

PTL’s quick plummet among sex and money scandals resulted in a divorce between Jim and Tammy Faye in 1992. In 1998, Jim married his second wife, Lori, a youth minister who has written several books and hosted her own PTL show called “Life with Lori.”

No reservations are required to attend a taping of the show, and attendance is free. The Morningside website does offer this warning of sorts: “Please be advised that tapings of The Jim Bakker Show may last up to 6 hours. Audience members are welcome to stay for any portion of these tapings.”

Most of the attendants of the show aren’t visitors, though, but rather members of the Morningside community who are renting or have purchased one of the condos on the property. Though these condos and other living accommodations are available for overnight stay for the visitor — there’s also onsite camping. Morningside amenities also include a chapel, a general store, a cafe, a center for pregnant women and a 15-foot-tall statue of Jesus.

In the same way that Morningside looks like a set recycled from a failed television pilot, “The Jim Bakker Show” — at least in its current era — feels like a recycled attempt at former Bakker glory.

The resemblance between Tammy Faye and Lori isn’t striking, but it’s there all the same: like Tammy Faye, Lori is heavily made-up (though not nearly as heavily as Tammy Faye in the ‘80s), with big hair and a peppy spirit.

Lori also isn’t much of a performer, arguably what Tammy Faye was known best for. There in hopes of filling that gap is Tammy Faye and Jim’s daughter Tammy Sue Bakker, who has been a leading member of PTL since her parents’ divorce in 1992. She sings on the show and works as an announcer and co-host, and she’s fine, but she doesn’t have much of a spark. She certainly doesn’t have the Tammy Faye spark.

The show is bumbling and empty of substance; hosts talk over each other and repeat the same phrases about faith and justice, particularly where it comes to the end times and how shunted conservatives are in today’s woke world. It’s very clearly only a show for a certain brand of conservative evangelical Christians that enjoys talk of the apocalypse and attacks on American Christianity; it’s just a shame the show is so boring, too.

Even the end time prophetic preaching loses its appeal after a few minutes, particularly when there’s not much news about the apocalypse forthcoming.

Mike Lindell, the MyPillow CEO who became known for close association with President Donald Trump and his insistence the election was stolen despite no evidence backing up that claim, was a recent guest on “The Jim Bakker Show” for a three-part telethon. What did he have to say? Exactly the same script he’s been rehashing since the 2020 election, with additional bemoans of being “attacked” and “canceled” on the internet.

The rest of the program was essentially a cable TV shopping program for MyPillow products — fitting, as PTL has recently launched its own shopping program. The whole affair reeks of hopeless grabs at relevance.

A few audience members shown are incredibly enthusiastic, clapping and singing along, dancing in their seats. The rest of them just look tired. Frankly, so do Jim and Lori and every other host or guest on stage. (No wonder, especially if they’re on hour six of filming.)

Jim is 81 and suffered a stroke last May. He’s long past his prime to be a charismatic leader, more suited for the role of a soft-spoken church elder or Bible study leader. Most of his co-hosts and audience members look like they’re long past the need for charisma, too.

No one is encouraging Bakker to return to the man he used to be — but they might encourage him, kindly, to take a break from television. It’d be better for everyone.

Jillian Cheney is a contributing culture writer for Religion Unplugged who loves consuming good culture and writing about it. She also writes on American Protestantism and evangelical Christianity. You can find her on Twitter @_jilliancheney. 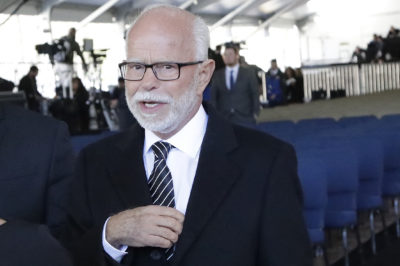 Jim Bakker and His Ministry Settle Lawsuit over COVID-19 Claims

Jim Bakker and his southwestern Missouri ministry will pay restitution of $156,000 to settle a lawsuit that accuses the TV pastor of

Tammy Faye Bakker’s story has been told in countless television interviews, as the punchline in “Saturday Night Live” skits and in a

31 thoughts on “Opinion: After Falling From Grace, Televangelist Jim Bakker Is Still On The Air”