Video: Nancy Beach on Surviving Abuse With Your Faith Intact

“I never had a category in my mind and heart for the capacity of Christians to behave so sinfully,” admitted Nancy Beach, former program director at Willow Creek Community Church, and one of the women to expose abuse by former pastor, Bill Hybels.

“But this is to forget or deny the nature of our humanity,” Beach continued, citing a Barna study that found that 40-percent of unchurched people avoid church because of negative, past church experiences. “It is not a matter of if we will get hurt by a church, but when. The very next question is how will we respond to church pain?”

With those honest, yet piercing words, Beach began the RESTORE Chicago conference on Nov. 2 at Judson University. Beach was the first to speak at RESTORE. And she set the stage for the rest of the conference, admitting honestly the pain and tragedy of church hurt, but also urging people to deal with that hurt in a redemptive way.

Beach said her discovery just a few years ago that Bill Hybels had not only abused her, but other women, hit her especially hard. “I knew my pastor since I was 15-years-old,” Beach said, adding that Hybels had profoundly impacted her life.

And as Beach describes in the clip below, seeing the scandal about Hybels splashed on news headlines was “one of the lowest moments of her life.”

Beach admitted that she’s struggled not to become bitter, especially when she and the other women who accused Hybels became the target of suspicion. To date, Hybels has not publicly owned any of the sins he’s been accused of. However, the elders of Willow Creek have said publicly that they believe the women.

As the victim of injustice, Beach said she’s fantasized that every wrong would be made right and that her abuser would get what he deserves. Yet even that would not solve everything, she said. The battle against bitterness would still remain—a battle victims must win if their souls are going to survive.

Lastly, Beach urged people to “lean into” community. She conceded that often the last thing victims of church abuse want is to be around other Christians. Yet she said community is crucial for healing.

Beach’s full talk is below. I hope it encourages and challenges you as much as it did me and many others at RESTORE.

This Sunday, Nov. 17, we will be gathering from 6:30 p.m. – 9:00 p.m. at Village Church of Barrington for a RESTORE Chicago follow-up event. This will be a time of worship, led by Josh Caterer. We’ll also hear testimonies from those attended the conference. And Chris Brauns, author of Unpacking Forgiveness, will be joining us to discuss what our disposition should be toward those who have hurt us, but are unrepentant.

Following Chris’ talk, we’ll have Q&A, and then will break up into small groups for discussion and prayer. I anticipate this will be a very rich time of fellowship and thoughtful, bibllcal engagement. The event is free and open to everyone, even those who didn’t attend the conference. However, you need to register so we know how many to expect. To register, click here. 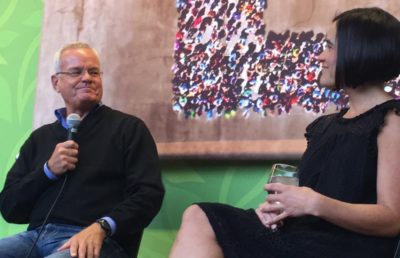