Nineteen-year-old Anne Wilson loves the stars, the television show “The Walking Dead” and her morning cup of vanilla iced coffee from Dunkin’.

“I feel like it’s just straight from God,” she said. “It’s like he blesses that coffee in particular.”

More than anything, Wilson says, she loves Jesus — as the teenager from central Kentucky explains in “My Jesus,” her debut recording that recently hit No. 1 on the Billboard chart for Christian music.

A live EP from Wilson, which includes “My Jesus,” has been streamed more than 37 million times, according to a press release from her record company.

But though full of full-throated praise, “My Jesus” is not a triumphal call to follow the Lord. Written after Wilson’s brother was killed in an accident four years ago, the song reaches out to those who are going through difficult times. In that, it may be a hit for the COVID-19 era.

“Are you past the point of weary?” the opening lines of the song ask. “Is your burden weighing heavy? Is it all too much to carry? Let me tell you ’bout my Jesus.”

Wilson, who co-wrote the song with West and Nashville songwriter Jeff Pardo, said her rapid rise to stardom began on a dark day.

After hearing the news of her brother Jacob, who was 23, Wilson said she went to a piano and began to play “What a Beautiful Name,” a popular Hillsong Worship anthem. Her parents eventually asked her to play the song at Jacob’s funeral.

The then-15-year-old, still in braces, later recorded a video of the song with some friends and posted it on YouTube.

“This song is dedicated to the loving memory of my beloved big brother, Jacob,” Wilson wrote in the video’s caption. “Thank you Jacob for always encouraging us to praise God, work hard, and always be kind. We love and miss you more each and every day.”

That YouTube video, which itself has been viewed a quarter million times, caught the attention of a producer in Nashville and eventually led to Wilson signing with Capitol Christian Music.

“The unprecedented success of ‘My Jesus’ is just the beginning, and we cannot wait to see what is to come for Anne,” Capital Christian Music co-presidents Brad O’Donnell and Hudson Plachy said in a statement.

Wilson grew up in a Christian home, attending a Presbyterian church for most of her childhood. Her parents taught her about faith in God, and she says that she made that faith her own as a teenager.

Her parents also introduced her to country music, especially the songs of Johnny Cash and Dolly Parton. She remains a huge Dolly fan, citing Parton’s 1980 hit “9 to 5” as her current favorite.

Though Wilson started playing the piano at a young age, she said that she had never sung in public before her brother’s funeral. An astronomy and science buff, she said her childhood dream was to work for NASA.

Being a professional musician had never crossed her mind, she said.

In a phone interview, Wilson said she hopes Jacob is proud of her. The two were close growing up and she recalled his sense of humor and kindness. She recalled one day when, knowing that Wilson had stayed home from school because she was feeling sick, her brother decided to go out and hunt some squirrel for her.

Jacob took his hunting dog Sally out to the backyard, shot a squirrel and cooked it up for lunch. The meal made her laugh and was surprisingly tasty.

“We put powdered sugar on it and we dipped it in barbecue sauce, and whatever that combo is, it was so good,” she said.

Wilson has spent the last two years honing her skills as a musician and writer and learning the craft of singing for a living. She’s also moved away from her family’s home, settling in Franklin, Tennessee, a Nashville suburb that’s home to Christian music stars such as Amy Grant.

When not on the road, Wilson is working on songs for her album, due out next year.

The success of “My Jesus” caught her by surprise. She knew the song was good but was taken aback by how well it connected with listeners. Most of all, she said, she feels grateful.

“It’s been a whirlwind of emotions,” said Wilson. “Just thankfulness and gratefulness, watching God take my story, which was something so broken, and turning it into something so beautiful.” 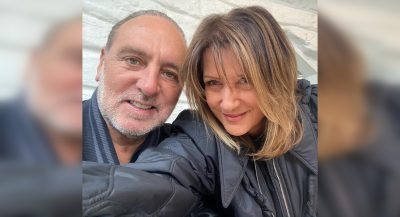