The “Nuclear Option”: How the Church that Founded Liberty University Can Remove Trustees & Jerry Falwell Jr.

It’s known as the “nuclear option.” And it’s a way the church that founded Liberty University can remove any university trustee, including embattled trustee and president, Jerry Falwell, Jr.

I recently became aware of this “nuclear option” when an anonymous source reached out to me and encouraged me to research Liberty’s articles of incorporation and an official letter Jerry Falwell, Jr., sent to the U.S. Department of Education.

Sure enough, the “nuclear option” exists, according to these documents. And given Falwell’s recent behavior, and the trustee board’s historic reluctance to hold him accountable, this could be an option that Thomas Road Baptist Church (TRBC)—the church that founded Liberty University—may want to consider.

Currently, Falwell is on indefinite leave as president and chancellor of Liberty for posting, and then deleting, a racy photo of himself and his wife’s assistant.

Liberty’s articles of incorporation clearly state that TRBC’s board has the power to remove trustees it believes are failing to protect Liberty’s mission.

This is what Jonathan Falwell—pastor of TRBC and the son of Jerry Falwell Sr., who founded TRBC—referred to as the “nuclear option” in the 2016 book, Falwell Inc.

“Dad set it up so the church forever will be the rudder that guides the university,” Jonathan Falwell said. “He said that if Liberty ever turns to the left, members of the board should fire everyone and shut the place down. The nuclear option exists. They will use it if they have to.”

This oversight function of Thomas Road Baptist Church was also mentioned in a letter Jerry Falwell Jr. wrote to the U.S. Department of Education on January 16, 2014.

The letter states that the “University’s Articles of Incorporation provide the TRBC’s Board of Directors with the power to remove any University trustee the Board finds to be ‘undermining the mission of the university . . .’”

This ongoing oversight ensures that TRBC’s mission-oriented intentions in founding Liberty University continue to be implemented.  Thus, the TRBC Board of Directors maintains this continuing oversight of the University’s board of trustees and has the power to make its own interpretations on important issues related to the religious doctrine of the university.

I reached out to TRBC to ask if the church board is considering using its “nuclear option,” but no one responded. I also reached out to TRCB Pastor Jonathan Falwell, who also serves as a trustee at Liberty, but he did not respond either.

I contacted Scott Lamb, vice president of communications at Liberty University, by phone and email, specifically asking about TRBC’s ability to remove Liberty trustees. But Lamb did not respond.

Liberty’s Trustees Praise Falwell, While Others Call for His Removal

Currently, Liberty University’s Board of Trustees appear at odds with Liberty’s larger community of constituents. While many alumni, students, faculty, and staff are calling for Falwell’s removal, the trustees seem inclined to retain him.

Jerry Prevo, who served as chairman of Liberty’s Board of Trustees from 2003 until becoming Liberty’s interim president, said in a statement: “In the 13 years that Jerry Falwell, Jr. has served as president of Liberty University, Liberty has experienced unprecedented success, not only academically and financially, with a world-class campus, but also spiritually.”

Prevo also attributed Falwell’s recent lapse in judgment to the “substantial pressure” that comes with leading “a large and growing organization.”

Similarly, Franklin Graham, whose son William Graham IV serves as a trustee at Liberty, said: “(Falwell) is a great leader and he has taken this school—it is one of the largest universities in the United States. He’s done an incredible job. He is a great leader and I certainly support him.”

About Falwell’s recent racy photograph, Franklin Graham added: “All of us in life have done things that we’ve regretted. I think he certainly has regretted that. It was a foolish thing.”

However, Save71—a group of more than 400 Liberty alumni, students and faculty—are calling on Liberty’s Board of Trustees to fire Falwell. The group says its actions are not based on just “one photo,” but “a pattern of behavior and toxic culture that trickled down from Liberty’s leadership into every part of the school.”

The group adds: “Over the past several years, President Jerry Falwell Jr. has damaged the spiritual vitality, academic quality, and national reputation of Liberty University. We are a group of Liberty alumni, students, and faculty calling on the Board of Trustees to permanently remove President Falwell and replace him with a responsible and virtuous Christian leader.”

Similarly, U.S. Representative Mark Walker, a former instructor at Liberty, tweeted that Falwell’s “ongoing behavior is appalling” and Falwell should “step down.”

As a Music Faculty Advisory Board Member and former instructor @LibertyU, I’m convinced Falwell should step down.

None of us are perfect, but students, faculty, alumni and @LUPraise deserve better.

And Liberty alumnus Colby Garman, who serves on the executive committee of the Virginia Southern Baptist denomination, tweeted: “In order to preserve the many great advances that have been made at @LibertyU and honor the ongoing work of the excellent faculty there he should step down and make way for new leadership.”

I appreciate Rep. Walker speaking up about Jerry Falwell Jr’s ongoing behavior. In order to preserve the many great advances that have been made at @LibertyU and honor the ongoing work of the excellent faculty there he should step down and make way for new leadership. https://t.co/fqZQpT2aJz

It remains to be seen whether the directors of Thomas Road Baptist Church side more with Liberty’s Board of Trustees or with Falwell’s many detractors. And even if TRBC’s board wants Falwell out, does the board have the resolve necessary to use its “nuclear option”?

But the option is there should TRBC’s board choose to use it. And given the deep divide that appears to exist between Liberty’s trustees and the rest of Liberty’s community, it may be TRBC’s board that steps in to break the stalemate.

UPDATE: According to the Virginia State Corporation Commission, Jerry Falwell, Jr., sits on the board of Thomas Road Baptist Church. I have sent inquiries to TRBC, Jonathan Falwell, and Liberty University, seeking answers as to how Falwell ended up on the board of a church that’s supposed to hold the university accountable. So far, there has been no response. 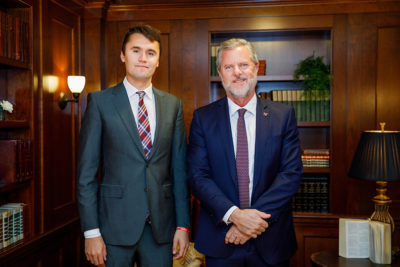 Conservative firebrand, Charlie Kirk, is out as the head of Liberty University’s Falkirk Center—and Liberty is renaming the think tank the Standing 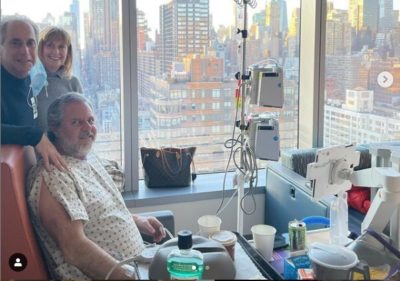 Jerry Falwell, Jr., announced on Instagram that he’s been in and out of the hospital four times over the past seven months

34 thoughts on “The “Nuclear Option”: How the Church that Founded Liberty University Can Remove Trustees & Jerry Falwell Jr.”