The Rev. Marshal Ausberry Sr., the outgoing president of the National African American Fellowship of the Southern Baptist Convention, argued passionately Monday that Black members of the predominantly white denomination should continue their affiliation in the face of recent controversies.

“Before you go through that door,” Ausberry told dozens of  NAAF members on the eve of the SBC’s annual meeting, where debates over race, gender and sex abuse are expected to spill onto a convention floor, “I want to encourage you before you do anything, seek the will of God.”

The Virginia pastor, who is concurrently serving as the SBC’s first vice president, compared African American Southern Baptists to the biblical character of Jonah, who did not want to go to Nineveh, a place with much wickedness. But God wanted Jonah to go there anyway, “and call out against it, for their evil has come up before me,” he said, quoting the Hebrew Bible.

Several prominent Black pastors have left the denomination since December, when the SBC’s Council of Seminary Presidents declared that critical race theory, an academic approach to understanding systemic racism,  was incompatible with the denomination’s faith statement. Two years ago, the SBC passed a resolution that sought to settle controversy over CRT by calling its ideas “analytical tools subordinate to Scripture.”

The presidents’ December statement set off protests, meetings and a possible new resolution that Baptists attending the SBC annual meeting this week will be asked to address.

Ausberry said he has heard many arguments for departing the SBC, which is estimated to be six to eight percent Black, and has himself “been close to the door in tears” at times.

“Some of you feel that maybe the SBC-ers are a bunch of racists and no self-respecting Black church would be part of this racist organization,” he said. “Some of you say that or maybe you heard that the Black church ought to not belong to a largely white organization or convention.”

But Ausberry pointed out that, statistically, the offenders represented a tiny share of the SBC.

“You want to leave because two SBC-affiliated pastors called Vice President Kamala Harris a Jezebel,” he said. “They shouldn’t have said it. They should be condemned absolutely. But two out of 45, 47,000 pastors?”

He then shifted to departures of prominent Southern Baptists. First, he cited Bible teacher Beth Moore, who left in March in part due to many SBC leaders’ alignment with Donald Trump despite the “Access Hollywood” tapes that revealed the then candidate bragging about his abusive treatment of women.

While not citing others who have left by name, Ausberry told the group, “Some of you are playing follow the crowd,” he said. “And if certain people say they’re going to leave, then you want to follow the leaver.”

Then he twice repeated Russell Moore’s words about why he earlier refrained from revealing “horrific actions” he had witnessed: “part of it is because I don’t want the vast majority of Southern Baptists who are good and godly and seeking to be on mission to grow weary and leave.”

As his sermon took on a familiar call-and-response rhythm with his audience, Ausberry argued for staying in God’s will and not being swayed by doing what might seem right in secular sectors.

“It might be politically correct and popular with your friends and some of you say, ’My friends want me to ‘leave loud,’” he preached. “The SBC might be your Nineveh. I want to encourage you before you do anything, seek the will of God.”

Ausberry’s sermon was the featured speech during NAAF’s Annual George Liele Dinner, named for a formerly enslaved man who is considered the first Protestant missionary from America. He traveled to Jamaica in 1782.

This year is the first time Liele has been recognized on the official SBC calendar, which has designated the first Sunday in February as George Liele Church Planting, Evangelism and Missions Day, reported Baptist Press.

Historical figures such as Liele and many Southern Baptists who have been the first Black people to lead some multiracial churches and join seminary faculty and Baptist agency staffs are examples to look to for inspiration, Ausberry argued.

“It may not make sense today but look back on the shoulders we’re standing on as we move forward,” he said.

After Ausberry received a standing ovation, the church musicians for the evening struck up the classic gospel tune: “I Don’t ‘t Feel No Ways Tired.”

The end of its chorus says, “I don’t believe he brought me this far to leave me.” 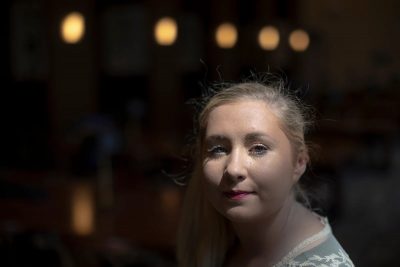 Since 2019, when Hannah-Kate Williams told her harrowing allegations of sexual abuse by her pastor father to a handful of Southern Baptist