“Got me a 1971 Beetle,” announced Ed Stetzer on Facebook last April, adding that he and his daughter were planning to restore the classic Volkswagen car. However, what Stetzer didn’t mention was how he had obtained the car.

And now Stetzer, the executive director of the Billy Graham Center at Wheaton College and a contributing editor for Christianity Today, is at the center of controversy for accepting the Beetle, which Stetzer recently admitted was a gift from now-disgraced megachurch pastor, James MacDonald.  What’s worse, MacDonald reportedly didn’t buy the car with his own money, but instead used funds from Harvest Bible Chapel, the Chicago-area church he founded more than 30 years ago.

The story about the controversial gift was first reported on Friday morning by Dee Parsons at The Wartburg Watch. Parsons said she had been told about the gift by “some reliable folks.” But hours after she published her article, pastor and podcaster, Joe Thorn, tweeted a message he had received from Stetzer, confirming Parsons’ report.

I emailed Stetzer for details about the gift and for comment concerning the ethical issues surrounding accepting such a large gift, but he did not respond. However, on Sunday, Mark Galli, editor in chief for Christianity Today, told me that Stetzer was willing to meet with Galli and me to discuss the issue. Galli added that he did not want to discourage me from reporting on the gift to Stetzer, but said he didn’t see a story there. I insisted that any meeting with Stetzer be on the record, and Galli emailed Monday, saying Stetzer was “not comfortable meeting on the record.”

I also contacted Harvest Attorney Christopher Nudo. Nudo confirmed that Walk in the Word had purchased the car for Stetzer last spring and that in March, Stetzer had reimbursed the ministry for the full amount of the car, just under $13,000. Nudo said the money for the car had come out of a Walk in the Word reserve account and added that he was 95% sure that former Harvest COO Scott Milholland had cut the check. Nudo said two other people at Harvest almost certainly would have known about the purchase of the car with Walk in the Word funds—James MacDonald and his assistant, Sharon Kostal, who no longer works for the church.

Stetzer has had a close relationship with MacDonald and Harvest for years. He’s spoken at Harvest’s Vertical Church Conferences, its former Harvest University, and has been a guest preacher at weekend services. Stetzer also appears to have worked as a consultant for the church. According to a 2017 Harvest publication for 40 Mighty Men, a group of major Harvest contributors, Harvest paid Stetzer $15,000 to bring his “influence and network . . . into the mix of church planting.”

Getting paid for these kinds of jobs and engagements is common among Christian speakers and leaders. However, Stetzer’s receipt of a large gift from a celebrity pastor like MacDonald raises conflict of interest issues, given Stetzer’s position at Wheaton College and especially his role as an editor for Christianity Today (CT).

According to the Society of Professional Journalists’ (SPJ) Code of Ethics, journalists should “avoid conflicts of interest, real or perceived.” They should “refuse gifts, favors, fees, free travel and special treatment . . . that may compromise integrity or impartiality, or may damage credibility.”

When I raised this issue with Galli, he said, “Stetzer is not on staff with CT; he blogs, and some of his blogs appear on CT. He’s not a journalist, he’s a writer—but he’s independent of CT and is not accountable to CT.” Galli added that Stetzer does not receive any money from CT and his title of “contributing editor” should be seen in that light.

“Galli told me about a month ago that Stetzer had arranged the October 31st conversation between MacDonald and CT deputy managing editor Jeremy Weber. That conversation resulted in CT publishing MacDonald’s article . . . entitled, ‘Why Suing is Sometimes the Biblical Choice.’”

However, Galli later admitted that CT pays the Billy Graham Center a fee for Stetzer’s regular contribution to the media outlet. Also, Stetzer doesn’t just write blogs for CT; he manages one of eight special sections on CT’s website called “The Exchange with Ed Stetzer.” The Exchange also serves as a landing page for everything Ed Stetzer, including his regular columns, podcasts, and work with the Billy Graham Center and Lausanne North America, a network of influential church leaders.

What’s more, Stetzer’s close relationship with MacDonald played a role in CT’s recent coverage of the Harvest debacle. Galli told me about a month ago that Stetzer had arranged the October 31st conversation between MacDonald and CT deputy managing editor Jeremy Weber. That conversation resulted in CT publishing MacDonald’s article defending his lawsuit against me and four other defendants, entitled, “Why Suing is Sometimes the Biblical Choice.”

Galli admitted Stetzer’s role after I told him about a recording I had heard of MacDonald and Weber’s conversation. This recording was aired in part on a podcast by Chicago radio personality, Mancow Muller. At the beginning of that conversation, Weber tells MacDonald, “Even Singapore is not far enough away to get away from Ed Stetzer.” Weber then says that Stetzer had relayed a message from MacDonald and that’s why Weber had called MacDonald.

Also, a day after MacDonald and Weber’s conversation, Galli emailed me and asked “if there would be much interest on (my) part, or on the part of the aggrieved bloggers (the other defendants in the lawsuit) to participate in a reconciliation process.” Galli added that he had “been led to believe that Harvest may be open to this too.”

Innocent or not, I found it improper that Galli, a journalist, would be reaching out to me, a defendant, on behalf of a plaintiff—and I told him so. I added that if Harvest wished to speak with me, they could have their attorney contact my attorney. Plus, there was nothing to reconcile. At that point, I hadn’t written anything about Harvest, and the lawsuit was merely an attempt at prior restraint.

CT’s unusual coverage of the Harvest scandal doesn’t necessarily show collusion between Stetzer, MacDonald, and CT. But it certainly raises questions, especially in light of the gifted car. But it’s not just Stetzer’s position with CT that may present a conflict of interest.

According to Wheaton College’s Employee Handbook, accepting gifts “of more than a nominal value,” which is defined as exceeding $100, is considered a conflict of interest if the person giving the gift is “seeking to have a relationship with the college.” I emailed LaTonya Taylor, spokesperson for Wheaton College, asking whether the college viewed Stetzer’s acceptance of the gift as a conflict of interest. Taylor responded, “We do not consider this to be a college-related matter.”

However, Stetzer is involved in a plethora of other organizations, which could potentially involve conflicts of interest. He serves as the executive director of a network of church leaders, called Lausanne North America; serves as interim pastor for Moody Church; hosts a program on the Moody Radio Network called Ed Stetzer Live; and serves as teaching pastor at Highpoint Church, a former member of Harvest’s now-disbanded church planting network called Harvest Bible Fellowship (HBF). Interestingly, CT published an interview Stetzer conducted with Kent Shaw, former executive director of HBF, on The Exchange in 2016.

Though Stetzer’s car may be the only reported incidence of MacDonald gifting a big-ticket item to someone outside the church, several sources told me that MacDonald had a regular practice of giving large gifts with the church’s money to people inside Harvest.

Betsy Corning, wife of former longtime elder board chairman, Dave Corning, told me that in 2008, Harvest honored the couple for 20 years of service with a gift of a Rolex watch and pearls. Betsy said both she and Dave felt conflicted about receiving the expensive gifts and kept them in their original boxes. The only exception were two occasions when the couple said they wore the pearls and watch “so as not to offend James.”

Betsy said James MacDonald’s wife, Kathy, had told her that James had bought the gifts with his own money. But Betsy said she and Dave always suspected that the church had paid for them. I reached out to Kathy MacDonald for comment, but she did not respond.

After the Cornings left the church in 2010, Betsy said she and Dave returned the gifts to the jeweler and gave the money they received to ministries they believed in, which did not include Harvest. (Corning said the couple also did not give any of the money to her ministry, Entrusted Ministries, to avoid being self-serving.)

“(T)he jeweler allowed the couple to see the receipt for the original purchase. And to the Corning’s surprise, the receipt showed the purchase of four to five additional Rolex watches and named Harvest Bible Chapel as the purchaser.”

Betsy added that the jeweler allowed the couple to see the receipt for the original purchase. And to the Corning’s surprise, the receipt showed the purchase of four to five additional Rolex watches and named Harvest Bible Chapel as the purchaser.

MacDonald also reportedly gave Harley Davidson motorcycles to at least two Harvest pastors. One of them was Niles Campus Pastor Mohan Zachariah, who yesterday confirmed in an email posted on the Wartburg Watch that in 2017, MacDonald had given him a Harley.

Zachariah said he didn’t think the gift was “unusual” because he “was aware of (MacDonald’s) gift-giving to others” and “believed it was a gift from (MacDonald).” However, Zachariah said that after learning that the church had paid for the Harley, he reimbursed the church for the motorcycle and put the bike up for sale. I emailed Zachariah, asking him if he knew which fund at the church was used to pay for the Harley, but he did not respond.

According to former Harvest Comptroller Alan Tsao, the church also gave a Harley Davidson to former Assistant Senior Pastor Rick Donald. Tsao said the funds for the purchase did not come from the portion of the budget he controlled, but likely came from the “black budget.” This is a portion of the church budget—about 20%—that according to Tsao, was hidden from all staff except MacDonald and former Harvest CFO Fred Adams.

I texted Rick Donald and asked him about the motorcycle and who paid for it, but he did not respond. I have reached out to other former Harvest employees who reportedly also received Harleys but have not yet heard back from them.

Meanwhile, Stetzer will be speaking today at The 2019 Small Town Pastor’s Conference. According to the National Association of Evangelicals, the average small town pastor makes less than $50,000.

In 2017, the famous late apologist, Ravi Zacharias, claimed in a Christianity Today (CT) article that a Canadian woman had sent him 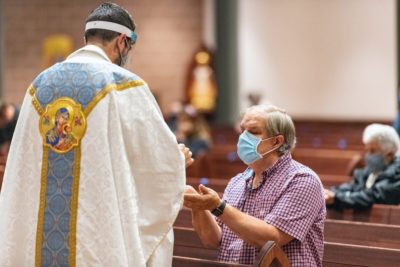 This Sunday, former Christianity Today (CT) editor-in-chief, Mark Galli will be confirmed a Catholic. He’ll stand before Bishop Richard Pates in the